The financial crisis has brought about a number of new European initiatives designed to coordinate national economic policies in the name of stability and growth. Alexander Ruser assesses one such initiative: the issuing of country-specific policy recommendations to EU states. Using a qualitative data analysis of the content of these reports, he writes that governments are being urged to follow policy advice that seriously interferes with national sovereignty in order to demonstrate solidarity with their fellow members of the Eurozone.

In my previous EUROPP article, I wondered whether the European Union is losing political influence in international environment negotiations. I argued that because of changing international relations, the EU may become less important as a normative power on the global scale. But what about the EU’s normative basis itself? Have the challenges of recent years affected its core values, such as ‘solidarity’ and ‘equality’?

Political reaction to the global financial crisis, and in particular to the sovereign debt crisis, has focused on making European economic governance more efficient. In addition to immediate emergency action like rescues and bail-out packages, the most important structural reform was the approval of the ‘European Semester’. Its implementation marked a paradigmatic shift in economic governance. Budget surveillance and control mechanisms have replaced voluntary initiatives such as benchmarking and intergovernmental cooperation like the ‘Open Method of Coordination’ (OMC).

This new framework for economic governance provides important roles for the Council of the European Union and the European Council, while the European Parliament finds itself reduced to an advisory function. It clearly favours intergovernmental decision-making over democratic legitimation at the European level. As a reaction to global financial turmoil, recent government reform in Europe has been driven by a desire to fix the flaws of monetary union, encourage financial sustainability and increase its efficiency and reliability.

Unlike more future-oriented reforms of the past, the new economic governance seems to lack political vision. Instead, it tinkers with the symptoms of the crisis and indicates the EU’s adoption of a more technocratic approach, stressing agreement upon what is ‘necessary’ to save the euro and restore stability. The provision of annual, country-specific policy recommendations is among the most important governance innovations to reach this goal.

Aiming at providing a blueprint of the respective requirements, these reports (which are proposed by the European Commission but are adopted and finalised by the European Council in July of each year) differ considerably from soft law mechanisms like the OMC. As a result of intergovernmental deliberation, the European Semester seeks to increase national responsibility for action. Part of this process is the blurring of European competences and domestic sovereignty. An examination of the county-specific policy recommendations from the past two years reveals that policy coordination under the new governance framework is far from limited to fields of clear European competence.

Qualitative data analysis of the 2012 policy recommendations shows that elected bodies in 15 countries were advised to make significant changes to their pension systems (especially to raise the statutory retirement age). Six governments were advised to reform national healthcare and almost a third were called on to encourage ‘productivity responsive wage-setting’ which could mean substantial changes to collective bargaining traditions. In contrast to policy fields closely affiliated with Brussels (like trade and research politics), policy recommendations on social policy and domestic taxation indicate a de facto reduction of domestic political manoeuvrability. 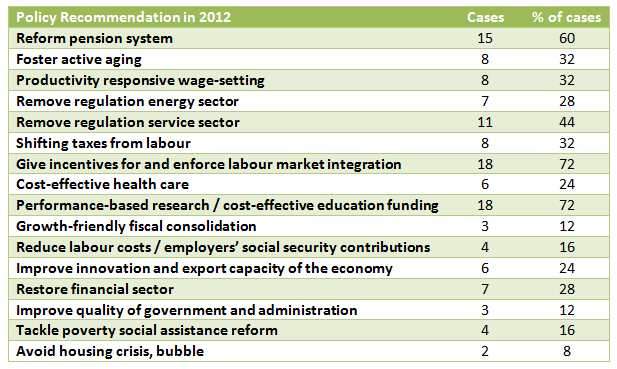 These findings may mark the beginning of revolutionary. but consensual changes to the normative basis of the EU. National governments are being urged to follow policy advice that seriously interferes with national sovereignty in order to demonstrate their solidarity with their fellow members of the Eurozone. At the same time, the strong position of intergovernmental institutions under this governance framework makes sure that the creditor Member States can influence specific policy recommendations. Further harmonisation of domestic politics could also make its way in, with national governments lacking the power to resist.

On the European level, insisting on maintaining national sovereignty displays a lack of solidarity. At home, policy recommendations claim the technocratic appeal of being necessary in order to regain economic stability not only within a particular country, but for the Eurozone as a whole. This may lead to a substantial redefinition of the boundaries between domestic and European politics. When national governments are urged to reform social security, collective bargaining or taxation because of a necessity to do so defined elsewhere, the question of the legitimacy of European politics – especially given the limited influence of the European Parliament – has to be addressed again.