European integration necessitates that there is a division of competences between the national and European levels, but how do voters assign responsibility when things go wrong? Sara Hobolt and James Tilley argue that while plenty of voters hold the EU responsible for bad outcomes, it is difficult for them to translate this blame into punishment for political actors at the ballot box. They illustrate that perceptions of responsibility are not only inaccurate, dependent as they are on poor information and existing prejudices, but that the lack of both a clear government at the EU level and a shared European vantage point dooms EU level governance to be unaccountable. This has resulted in increasing distrust of the EU institutions.

For the last few years coverage of politics has been dominated by the economic crisis and the role that the EU has played in that crisis. Who is actually responsible for economic problems is far from clear, but it matters who voters blame because democratic accountability rests on the electoral process of punishing or rewarding governments on the basis of past performance. This relies on the assumption that voters are able to correctly assign responsibility for outcomes. This is clearly complex in the EU where citizens face the additional challenge of distinguishing between the powers of multiple levels of government. This is not just complicated by formal institutions however. In fact there are three main mechanisms that produce responsibility judgements: institutions, information and individual biases.

First, people’s views are shaped to some extent by real institutional divisions of power. Figure 1 shows how both political experts and the general public in countries inside and outside the Eurozone place responsibility for interest rates (on a 0-10 scale, where 0 implies the EU has no responsibility and 10 implies it has full responsibility). Clearly, experts and the public in Eurozone countries think the EU is more responsible for interest rates than experts and the public in countries with a floating currency like Britain. The differences between experts may be more pronounced, but they are similar in type to the differences between ordinary people.

Figure 1: Expert and public perception of the EU’s responsibility for interest rates in EU countries 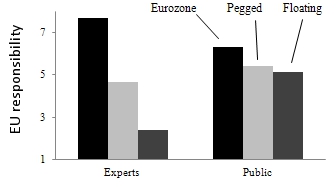 Note: The figure shows mean scores on a 0-10 scale of the perception each group (experts and the public) had of the responsibility of the EU for interest rates in their own country. A value of 10 implies the EU has full responsibility, while a value of 0 implies it has no responsibility. All countries are equally weighted within the currency groupings: Eurozone member, countries with their currency pegged to the euro, and countries outside the Eurozone with a floating currency. Source: European Election Study (EES) 2009 and political expert survey 2010.

Nonetheless for most major policy areas, such as the economy, immigration or healthcare, perceptions of EU responsibility across countries are actually very similar. One reason for this is the lack of high quality information from politicians and the media about responsibility and the EU. In particular, EU responsibilities for specific policies are rarely mentioned. The figure below shows how little media coverage of the economy involves mention of the EU. Most broadcasts and articles that mention performance mention responsibility, but very few mention that the EU is responsible.

Figure 2: Percentage of newspaper and television reports on the economy in EU states that assign responsibility to the national government, other national actors, and the EU 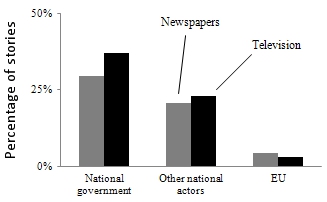 Note: The figure displays the percentage of stories on the economy that assigned responsibility to the national government, other national actors (political and non-political) and the EU (N = 4,822 stories). Source: EES Media Study 2009.

Given this lack of information, many people actually rely heavily on individual biases to estimate where responsibility lies. Existing views about the EU colour people’s views of responsibility. Figure 3 shows data from 2011 – the height of the Eurozone crisis. People across Europe were asked who was responsible for ‘current economic problems’. Those who dislike the EU project blame the EU, whereas EU enthusiasts tend to absolve the EU of blame. These are patterns that are found repeatedly across the EU. Judgements of responsibility are thus not just a product of institutional differences in responsibility, but are also used to reconcile predispositions about the EU with information about changing policy performance.

Figure 3: Attribution of responsibility for ‘current economic problems’ by EU opponents and EU supporters in 2011 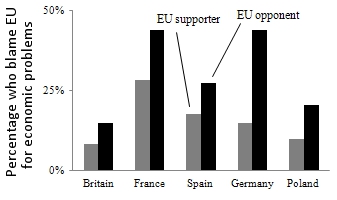 Note: The figure displays the percentage of people in each country who say the EU is either first or second to blame for current economic problems. Source: Pew Global Attitudes Project 2011.

What are the consequences of these responsibility judgements? Democratic accountability means that voters hold politicians to account for things for which they are deemed to be responsible. This process generally functions well at the national level. National governments are punished for poor performance if they are held responsible, especially when a single party government is in place.

There is no such process happening for the dominant Europarty in the European Parliament however. It seems that just as it is more challenging for voters to hold very large coalition governments in national parliaments to account, it is close to impossible for voters to identify which parties to reward and punish at European elections. Since citizens are unable to vote for or against a ‘government’ in the EU, when voters hold the EU responsible for poor performance they lose trust in the EU institutions instead. Indeed, since the onset of the economic crisis in 2008, public trust in EU institutions has declined by 17 percentage points, according to the most recent Eurobarometer surveys.

All of this has important implications for the future course of the European Union. First, people often do not accurately know which level of government is responsible. Second, even if they did have accurate knowledge of EU responsibilities, they cannot hold EU level political actors to account for performance. Are there any solutions to these problems?

Unfortunately, there are no obvious easy fixes. Improving institutional clarity and levels of information, so people are able to more accurately identify responsibility within the EU, is clearly difficult. It is also unrealistic to think that a situation of Europe wide political parties competing for office, which would improve the clarity of government, is around the corner. Most fundamentally though, it is also unclear on what basis voters would evaluate any incumbent EU governing party. Europeans continue to evaluate policymakers at all levels primarily on the basis of what they have done for their nation, not for the EU as a whole. This may change in the very long term, but since Europe lacks the common identity and public sphere found in many federal states it is unlikely to change radically in the foreseeable future.

European citizens simply do not view events from a European vantage point. Until Greek voters care about unemployment across the whole of the EU, and not only in Greece, public evaluations will inevitably focus on performance at the national rather than at the European level. In that sense, unless people start to care not only about what the EU institutions can do for them and their nation, but also what these institutions can do for Europe as a whole, there seems little prospect of democratic accountability becoming a reality at the European level.

A more detailed discussion of this topic can be found in Sara Hobolt and James Tilley’s recently published book Blaming Europe? Responsibility without accountability in the European Union with Oxford University Press. The book is being launched at the LSE on the 11th March 2014 with a specially convened debate on how the economic crisis has affected European democracy, see here for details.