The purpose of competitive elections is to reward good politicians and punish bad ones, but what happens if elections can no longer fulfil this role? Diego Muro and Guillem Vidal write that developments in Southern European countries since the start of the financial crisis have undermined the legitimising role of elections. Suffering from persistent unemployment rates, citizens’ frustration has been indiscriminately projected onto the key political institutions: the government, parliament, and political parties. They illustrate that the unemployment rate is the measure that best forecasts rising levels of political disaffection in these countries, and that voting for a change of government has little impact on citizens’ trust in politics.

The Great Recession that began in 2008 has brought about an exponential increase in political dissatisfaction with democracy in Southern Europe. Levels of distrust towards key political institutions – government, parliament and political parties – are at an all-time high in Greece, Portugal and Spain. As shown in Chart 1, Eurobarometer survey results between 1986 and 2013 indicate that a vast proportion of people in the Southern Mediterranean have grown sceptical of democracy, especially since the collapse of US investment bank Lehman Brothers, which is indicated in the figure with the vertical red dotted line. 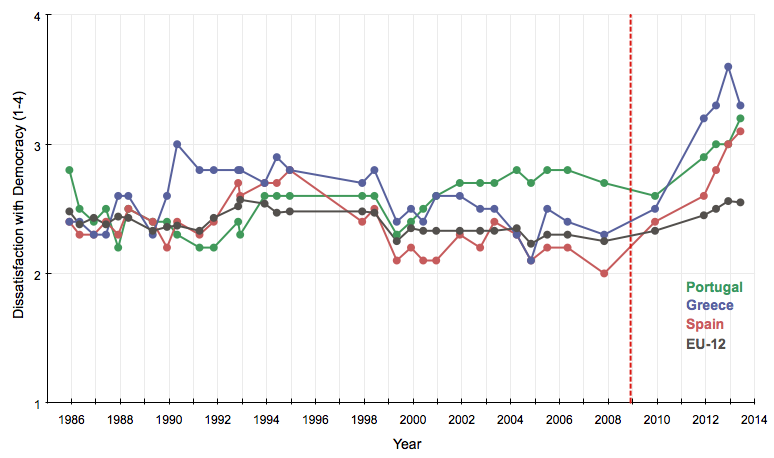 Note: The Chart shows responses from citizens on their satisfaction with democracy measured on a scale between 1 (very satisfied) and 4 (very dissatisfied). The figures are averages for Portugal, Greece, Spain and the EU-12. The red dotted line indicates the collapse of Lehman Brothers. Source: Eurobarometer

How should we interpret these results? Is there any relationship between the Great Recession and the rise of dissatisfaction with democracy? Could one argue that democracy has failed the electorate? Or are political institutions liable for this increase? We argue that unemployment is behind the soaring rates of ‘political disaffection’, a term which can be defined as ‘a feeling of powerlessness, cynicism and lack of confidence in the political process.’

In line with theories of economic voting, citizens punish or reward incumbent governments based on the macroeconomic performance of their country, especially when unemployment is prevalent. If this hypothesis about “jobs, jobs, jobs” is correct, Southern European voters would penalise the incumbent governments who are perceived to have mismanaged the crisis. Under normal circumstances, the electorate would then place trust in the newly elected representatives thus completing the cyclic process that legitimises democracy. Unfortunately, the conditions that make reward and punishment possible are not present in the current situation.

Chart 2 illustrates increasing levels of political disaffection towards the government, the parliament and the political parties in Greece, Portugal, and Spain. In addition, a fourth chart has been added to show the contrast between the southern periphery and the aggregate results of the 12 countries that founded the EU in 1993 (EU-12). The vertical dotted lines indicate legislative elections, the vertical red dotted line indicates the beginning of the recession and the shaded areas display whether the government was on the left of the political spectrum (red) or on the right (blue). The first three figures clearly show that going to the polls or changing the colour of government did not prevent the rise of political disaffection. The charts indicate that, although disaffection initially declines slightly, a persistent increase of mistrust can be observed in the three countries, regardless of whether there was a legislative election or the colour of the government changed.

Chart 2: Levels of Unemployment and Mistrust towards Political Institutions in Greece, Portugal, Spain and the EU-12 (2003-2013) – Click to enlarge 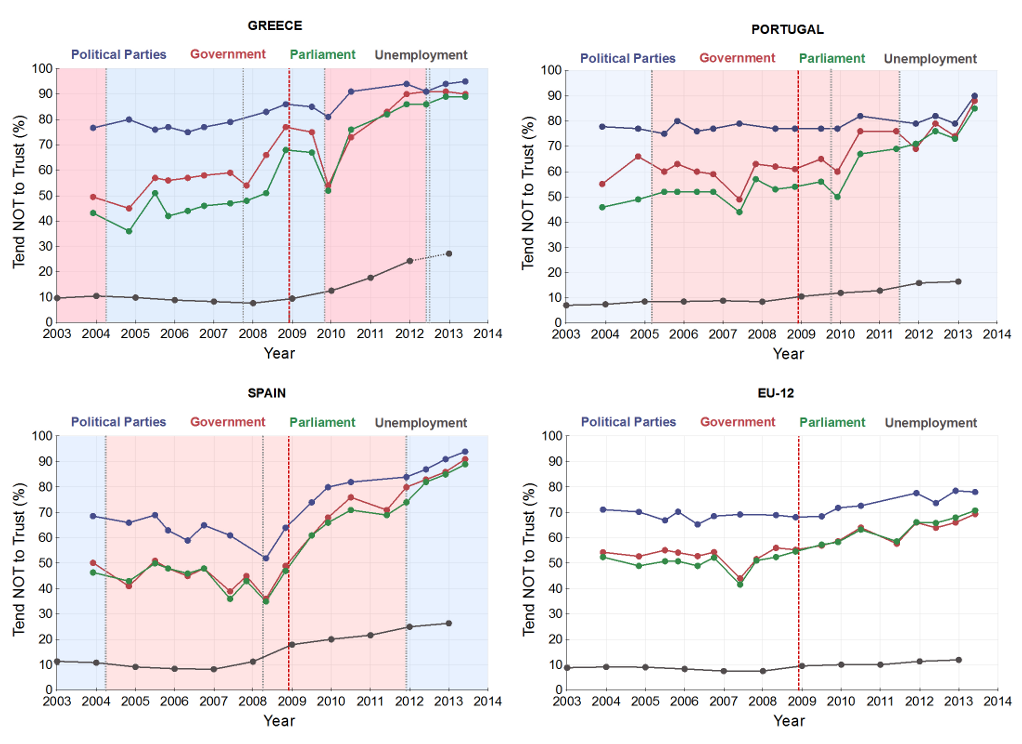 Note: The charts show both unemployment rates and levels of distrust as percentages (shown in the vertical axis). The Greek unemployment rate for the last quarter of 2013 was not available at the time of writing. The data for 2013 displays the average of the first three quarters. Source: Eurobarometer and Eurostat

The data clearly shows that holding elections has not prevented an increase of institutional mistrust in Southern Europe, maybe because citizens cannot punish adequately those co-responsible for the current economic crisis at the domestic and international level. Instead, the increase in the unemployment rate (bottom line in the charts) is the best predictor of political disaffection, whereas electoral sanctioning has not helped citizens renew confidence in democratic institutions. As a matter of fact, Southern European citizens have punished political institutions indiscriminately and levels of mistrust are at the highest point since 2003.

Bertrand Russell defined democracy as ‘the process by which people choose the man who’ll get the blame’. If citizens are unable to effectively identify those who deserve to be punished and elect credible alternatives, elections become irrelevant, and citizens develop political disaffection or mistrust against all political institutions (especially the government, parliament and political parties). In the context of the Great Recession, the unemployment rate best explains the increasing levels of political mistrust in Southern Europe. The real questions are, how long can citizens mistrust their political institutions before they start challenging democracy? Is it safe to assume that political disaffection will not affect the long-term legitimacy of democracy?

Guillem Vidal Lorda – Institut Barcelona d’Estudis Internacionals (IBEI)
Guillem Vidal Lorda is Research Assistant at the Institut Barcelona d’Estudis Internacionals where he currently works on the WAYS OUT project. He holds a BSc in Political Economy from the Utrecht University and an MA in International Relations from IBEI. His research interests include political economy, democracy and comparative politics of Southern Europe. Twitter: @GvLorda