Mental health is a key policy issue across Europe. Lucia Fiestas Navarrete, Mahlet Atakilt Woldetsadik and Antoine Flahault take a comprehensive look at the roles education and gender play in mental health problems in 15 European countries. They note that individuals with lower levels of education are more likely to experience psychological problems, but are also less likely to seek treatment by consulting a psychologist or taking medication. The fact that education may function as a proxy for socio-economic status suggests that socially determined inequalities have an impact on mental health outcomes.

Mental disorders are one of the major health challenges of the 21st century. In the European Union, over one third of the population is believed to suffer from mental disorders alone in any given 12 month period. This corresponds to approximately 164.7 million people affected with one or more of the 27 different diagnostic groups of mental disorders, across all ages.

Studies have demonstrated that the use of health services among people with mental disorders in the region is very limited. Research shows that among individuals with a 12 month mental health disorder, 25.7 per cent have consulted a formal health service during that period, and that among those who sought out formal health services, 21.2 per cent received no treatment. Provision of adequate care for groups of people with very different mental health needs has been a challenge and a major contributor to inequalities in health in Europe.

Lack of adequate care is not only a consequence and a cause of inequity, poverty and exclusion, but is also a substantial risk factor for morbidity and mortality from illnesses ranging from cardiovascular diseases and cancer to self-harm. Thus, there is a continuous need to assess the distribution of psychological well-being, and mental health help-seeking behaviours in Europe across gender, age and education levels so as to guide the positioning of future policies addressing mental health in the region.

Figure 1 below shows a comparison of average country scores for psychological well-being (measured by a survey asking respondents to score their psychological well-being over the last four weeks) for 15 European countries in 2008. The figure separates respondents by sex and places them in three different groups related to their education level. Levels 0-2 refer to individuals with pre-primary, primary, and lower secondary education; levels 3-4 refer to those with upper secondary and post-secondary/non-tertiary education; while levels 5-6 refer to those with tertiary education (i.e. university or professional vocation training/education). 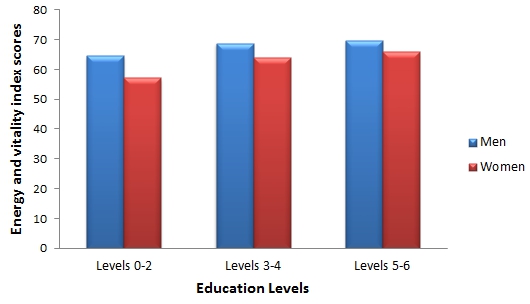 Note: Psychological well-being is indicated using average country scores for the ‘energy and vitality’ index – the higher the score, the closer a respondent is to optimal mental health. The horizontal axis separates respondents into three education groups – levels 0-2 represent the lowest education levels, with levels 5-6 the highest. Data from Eurostat (based on a survey asking respondents about their mental health over the previous four weeks).

Overall, men report consistently higher energy and vitality index scores on average than women (67.4 vs 61.7). This gender gap is highest among those in lower education levels. Men who have a pre-primary, primary and lower secondary education (levels 0-2) have average scores that are 7.5 points higher than their female counterparts in the same educational category.

Moreover, the gender gap in psychological well-being is reduced as individuals move to higher levels of education. European men and women belonging to groups with the highest levels of education have better psychological well-being scores than their counterparts in the lowest education level groups: men in education levels 5-6 have a score 5.1 points higher than those in levels 0-2, while women in levels 5-6 have a score 8.9 points difference than those in levels 0-2. This suggests the existence of factors that may be at play in contexts where women and men have the lowest levels of education, which are no longer relevant in contexts where they both have higher education. In this regard, education may work as an equaliser among men and women in their experience of mental health outcomes. The education gradient in psychological well-being is sustained across age categories, as shown in Figure 2. 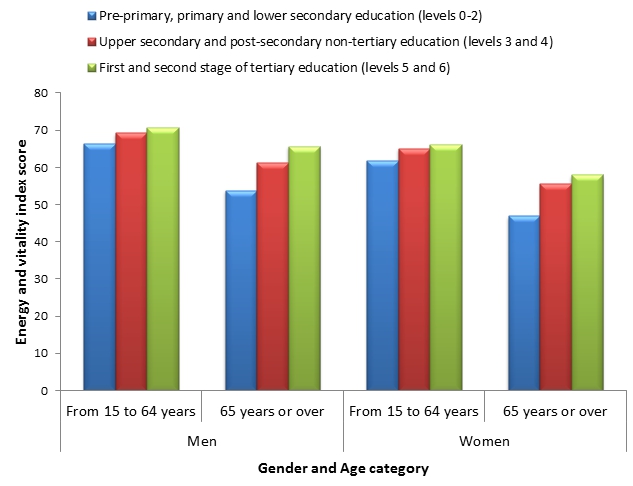 Figure 3: Percentage of men and women in selected European countries who had consulted a psychologist in the last year (2008) 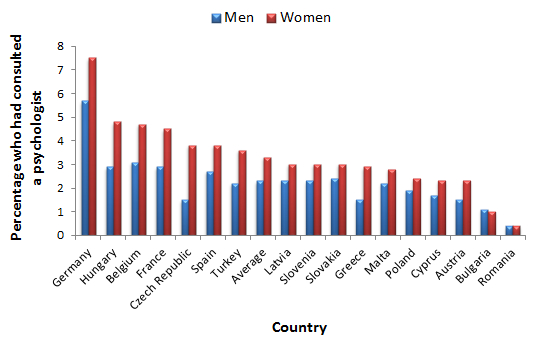 This demonstrates that women are more likely to seek help for psychological issues, as exemplified by their increased use of medications and higher consumption of psychological care. Furthermore, as shown in Figure 4, we observe an education gradient in help-seeking behaviour among men and women aged 65 and older.

Figure 4: Percentage of men and women aged over 65 in selected European countries who had consulted a psychologist in the last year by education level (2008) 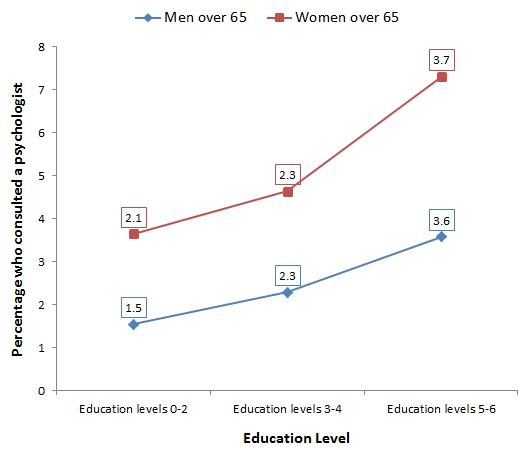 It is important to recognise that there are significant country differences in consumption of medications, as well as in psychologist consultations that may be the result of cultural country-specific attitudes regarding help-seeking behaviour and frequency of contact with health professionals. In these cases, it would be beneficial to think about the population’s help-seeking behaviour as providing an opportunity for the mental health care system to target individuals who are at risk of suffering from detrimental mental health outcomes. Taking into consideration the implications of the gendered help-seeking attitudes, it could be suggested that gender-sensitive strategies are needed in order to support and treat individuals who are suffering from mental health afflictions and are actively seeking help.

Education level was also shown to be an important factor contributing to the observed differences in psychological well-being and help-seeking behaviour. Men and women with the highest levels of education have higher levels of psychological well-being and help-seeking behaviour compared to those with the lowest levels of education. Education may be acting as a proxy for socio-economic status – in which case it exposes socially determined inequalities in mental health outcomes across Europe. On the other hand, it may provide us a window of opportunity to target mental health disparities across vulnerable subgroups through education-based health promotion initiatives.

What is lacking so far is information on the comparative state of mental health with regard to related policies and practices across European countries. This knowledge could be of great practical value, as it could reveal the areas in which action could be most beneficial. There is a wide range of variation in the policies and practices that are being implemented by countries in Europe. Since 2005, under the guidance of the World Health Organization’s European office, more than half of the region’s countries have started to move forward with new countrywide mental health policies or have updated their existing ones. However, countries in Europe continue to face challenges posed by a high prevalence of mental disorders and the scarcity of resources allocated to appropriate services. Treatment gaps have been widely reported in the academic literature, not only in terms of health professionals, but also in terms of specialised facilities and community mental health resources.

In this regard, the scarcity of data, and in particular of comparable outcome indicators collected regularly in the region, makes it difficult to advocate a greater volume of mental health resources, and for improvements in existing strategies. Moreover, it has been estimated that approximately less than one third of all mental health cases in Europe receive any treatment whatsoever, which suggests that there are significant unmet mental health needs among the European population.

Due to the great variety of the programmes across countries, coupled with the vast differences in mental health burdens and rigour in data collection, it has become increasingly important to uncover evidence that can provide a comprehensive picture of the state of mental health in Europe and indicate a way forward. In order to recognise best practices in the policies leading to the implementation of mental health strategies, concerted action on regional data collection will be required, at all levels, and across sectors.

Note:  This article gives the views of the author, and not the position of EUROPP – European Politics and Policy, nor of the London School of Economics. Image credit: Victor (CC-BY-SA-3.0)

Mahlet Atakilt Woldetsadik – Pardee RAND Graduate School
Mahlet Atakilt Woldetsadik, MPH, is a Doctoral Fellow at the Pardee RAND Graduate School in Santa Monica, California. Her research areas include the psychological and behavioral effects of combat on the wellbeing of veterans, reproductive health rights of HIV-affected couples, and gender-based violence in conflict situations.

Antoine Flahault – Sorbonne Paris Cité
Antoine Flahault, MD, PhD, is the co-director of Centre Virchow-Villermé Paris-Berlin and director of the Global Health Institute of the University of Geneva. He is a professor of public health at the School of Medicine Descartes, Sorbonne Paris Cité, France, and the School of Medicine of the University of Geneva, Switzerland, as well as, the former dean of the École des Hautes Etudes en Santé Publique.