Nordic countries are often treated as a separate, ‘exceptional’ group among European countries. Åsa Bengtsson writes that while this conception is extremely common, a closer look at voting behaviour and political engagement within Nordic countries reveals a different picture. There are in fact notable differences within the Nordic region which are at least as large as the variations between Nordic states and other countries in Western Europe.

We all know the story. The Nordic countries, those five small states in the Northern parts of Europe are somehow peculiar, maybe because of the strength of the welfare state, maybe because of the number of medals in the Winter Olympics. Rich, stable, equal and perhaps a bit complacent is the usual verdict. When it comes to the political arena, scholars have even presented the Nordic countries as ‘exceptional’ or ‘happy’ democracies.

Nordic uniqueness is also the theme of my recent co-authored book, The Nordic Voter: Myths of Exceptionalism, which is the first book-length comparative analysis of electoral behaviour in the five Nordic countries: Denmark, Finland, Iceland, Norway and Sweden. Interestingly enough, the book set out to tell the world, once again, how similar and distinct the Nordic sphere really is, but our conclusions turned everything upside down. Instead of engaging in a straight-forward comparative analysis of the five similar neighbours, we found ourselves opening up a Pandora’s Box of unique features.

The myth of Nordic exceptionalism

Most of the stories about ‘happy’ or ‘exceptional’ democracies date back to the 1960s and 1970s: a glorious period for the Scandinavian or Nordic political model. At that time, the Nordic countries were famous for a combination of stable party systems, allowing for representation of a wide range of interests, and extensive welfare states; a successful combination which made them appear capable of achieving a considerable amount of equality and powerful economic growth. The countries were also described as closer than most others in fulfilling the idea of a strong party based representative democracy, well founded on popular support, active engagement of citizens and enjoying high levels of democratic legitimacy.

Even if the basic argument about Nordic uniqueness was launched some 40 or 50 years ago, it is still actively cultivated, and the Nordic countries are persistently treated as a distinct group of states, deviating from other mature democracies. However, is this a valid claim to make? Based on our research the answer is, unequivocally, no.

Our analysis compares Nordic electoral behaviour and attitudes on a variety of central features – such as satisfaction with democracy, turnout, party identification, timing of vote choice, as well as the actual voting decisions – and does so following three different approaches. The first is to assess Nordic exceptionalism by comparing Nordic voters to voters from other countries. The second is to compare development over time within the Nordic region, while the third approach is to explore the micro-foundations of electoral behaviour within each of the five countries in the region.

The overall conclusion is that the initial expectation of Nordic exceptionalism and internal resemblance falls short on most accounts. Indeed the variation within the Nordic region tends to be as large, or larger, than the variation between the Nordic countries and other established multiparty democracies, at least in the Western European sphere.

Turnout is a typical example. A high rate of political participation is often claimed to be a distinct feature of Nordic democracy, supposedly founded on popular support and active engagement among citizens. However, as Figure 1 shows, a comparison of turnout in recent parliamentary elections in Europe reveals that the five Nordic countries are rather varied in terms of where they are situated. 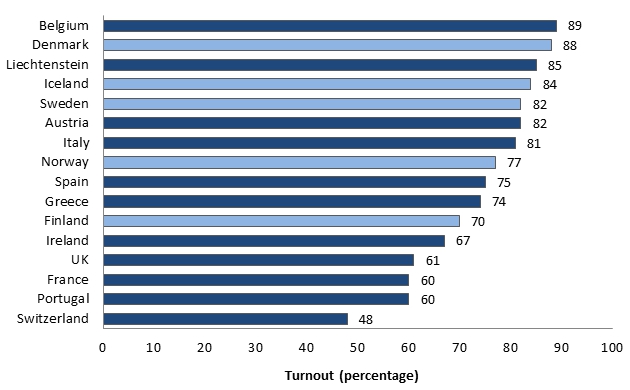 Note: The turnout level is the individual turnout at elections held between 2005 and 2011 in each of the countries. Where more than one election was held in each country during this period, only one election is shown.

Moreover, trends over time within the Nordic region also lack similarities. As Figure 2 shows, while the universal trend of decreasing levels of turnout has hit Finland and Norway relatively hard; Sweden, Iceland and especially Denmark have managed to keep a high level of engagement.

Figure 2: Turnout in parliamentary elections in the Nordic countries since 1975 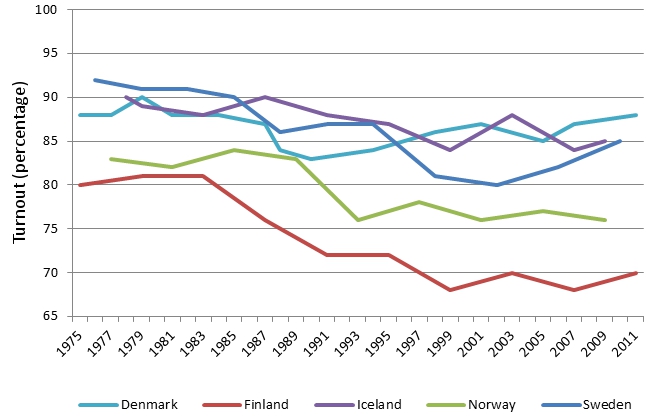 So what does our analysis tell us about electoral politics in the Nordic region except that the countries are more different than anticipated? One thing is that the general pattern among Nordic voters is in line with the trends found in many other established democracies. The story of the evolving Nordic voter is a story of increasing volatility, crumbling class voting as well as party identification, accompanied by a corresponding increase in late-deciders and, in most cases, lower turnout rates. Ironically enough, these similar trends have not resulted in Nordic countries looking more alike in terms of electoral behaviour. On the contrary, comparisons over time show a set of countries which are more different than ever before.

Our work therefore challenges a widespread practice to group Denmark, Finland, Iceland, Norway and Sweden together in analyses of comparative research. The general claim, substantiated by a unique and extensive empirical analysis of voter behaviour, is that the dissimilarities between the Nordic countries are in fact so large – both in terms of institutional settings and micro level voting behaviour – that it is not justified to make general claims of a Nordic voter. In other words, the old story of ‘remarkable similarities’ has been substituted with numerous examples of ‘remarkable dissimilarities’.

For a longer discussion of this topic see the author’s co-authored book, The Nordic Voter: Myths of Exceptionalism

Åsa Bengtsson – Mid Sweden University
Åsa Bengtsson is Professor in political science at Mid Sweden University and currently works as Academy Research Fellow at the Department of Political Science, Åbo Akademi University. She is a member of the Finnish National Election Studies steering group and collaborates on several comparative research projects, including the Comparative Candidate Study and The True European Voter.