The EU’s Generalised System of Preferences (GSP) is intended to allow the EU to offer favourable trading rules such as lower tariffs to developing countries. Gabriel Siles-Brugge writes on a recent reform which places greater restrictions on the types of exports which are eligible for this system. He argues that while the reform has been justified by the EU as a development policy on the grounds that it refocuses help toward the least developed nations, rather than emerging economies such as China and India; the real motivation is that it aids the EU’s commercial interests. In particular, by specifically targeting the exports of emerging economies, the reform improves the leverage of the EU in negotiations with these countries over future free trade agreements.

The EU is not only the largest provider of development aid in the world (if the contributions of all of its Member States are included), it also imports more goods from developing countries than any other trading entity. EU leaders, such as Development Commissioner Andris Piebalgs, are quick to draw on such statistics to highlight the EU’s role as ‘the world’s key development actor’. However, a recent reform of the EU’s Generalised System of Preferences (GSP) – one of the most important trade preference schemes for developing countries, providing improved access to the EU market through lower tariffs on a range of products – suggests that it is privileging its own commercial interests over developmental objectives.

The EU’s reform of GSP, which came into force in January of this year, saw two major changes to the scheme. Firstly, the EU made all high- and upper-middle income countries ineligible for trade preferences (what is known as ‘graduation’ in the trade policy jargon). Secondly, it became a lot easier for a country’s more competitive product ‘sections’ (or categories of products collectively entitled to preferences) to be ‘graduated’ as a result of changes to the formula by which such graduation is undertaken. Amongst many others, footwear from China, textiles from India and prepared foods from Thailand now no longer enter the EU under preferential duty rates.

The European Commission’s justification for suspending the eligibility for GSP for what are largely emerging economies is in keeping with its claim to be ‘the world’s key development actor’. The Commission’s argument is that by restricting eligibility it is ‘focus[ing] the GSP preferences on the countries most in need’. Rather than the increasingly competitive emerging economies, who are said to have been the prime beneficiaries of GSP so far, it should be the so called ‘least-developed countries’ – the 49 economies judged by the United Nations to have the lowest level of socioeconomic development – as well as other ‘vulnerable economies’ who reap the benefits of better integration into world markets.

There are, however, significant reasons to doubt this official line of reasoning. For one, the proposed changes are unlikely to have much of a developmental effect for the world’s poorest. As argued in an Overseas Development Institute paper on ‘The Poverty Impact of the Proposed Graduation Threshold in the Generalised System of Preferences (GSP) Trade Scheme’, the reform ‘is not an effective way of helping poor, uncompetitive states’. Ultimately, the lower tariffs offered by the GSP scheme are insufficient to offset their poor global competitiveness. Moreover, even where the so-called ‘preference margins’ afforded by GSP (the difference between the tariffs paid by beneficiaries and non-beneficiaries) are significant for the least-developed countries, the report finds that the largest gains from the reform will likely go to exporters from high-income countries (such as the US), who already have a significant foothold in the EU market and are emerging economies’ primary competitors.

If the GSP reform does not clearly help its supposed beneficiaries, then what purpose does it serve? To highlight this, Tables 1 and 2 illustrate the effect that the reform is likely to have on the top 11 users of the EU GSP scheme. What is interesting here is that most of these countries are currently in free trade agreement negotiations with the EU, with such economies mostly standing to lose a considerable proportion of their GSP exports to the EU (column 2). Moreover, these exports largely benefitted from a considerable ‘preference margin’, i.e. where the most-favoured-nation (MFN) tariff – the tariff faced by those trading with the EU without any special preferences – is in excess of five per cent (see column 3). Taken together, these statistics suggest that the GSP reform is likely to have a significant impact on the competitiveness of these countries’ product exports to the EU. 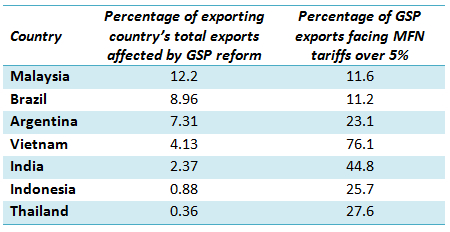 Note: The tables contain the countries which account for the most exports to the EU under the Generalised System of Preferences (GSP) scheme (excluding Saudi Arabia, for which the data was deficient). The second column shows the percentage of each country’s total exports (to all countries, not just the EU) which would be affected by the GSP reform (average from 2008-10, calculated from ODI estimates). The third column shows the percentage of each country’s exports to the EU under the GSP scheme in which the so called ‘most-favoured-nation’ (MFN) tariff (that is, the tariff they would have placed on their exports if they were not eligible to trade under the GSP scheme) is 5 per cent or higher. In other words, these are cases in which tariffs applied on exports to the EU are particularly high (>5 per cent) and therefore where trading under the GSP scheme is particularly valuable. Sources: Adapted from Siles-Brügge. Reproduced with permission.

The broader conclusion to draw from this is that the EU is specifically targeting the exports of emerging economies in order to encourage such countries to be more forthcoming in on-going free trade negotiations. In other words, the reform is about creating leverage with the likes of India, which the European Commission has complained about as a difficult partner to negotiate with because it already ‘enjoys relatively good market access for goods to the EU under the GSP’.

As the Commission somewhat disingenuously put it in its impact assessment of the regulation, while the reform ‘ha[d] nothing to do with other trade negotiations […] [it] might still have the unintended consequence of providing more advanced developing countries with a greater incentive to enter into and conclude reciprocal trade negotiations with the EU’ should they not wish to lose their preferential access to the European market.

What is more, the content of the reform reflects the influence of exporting business interests, which have been a key driver of the EU’s campaign to negotiate ambitious free trade agreements with emerging economies (and more recently the Transatlantic Trade and Investment Partnership). Making their voices heard during a European Commission consultation on the proposed reform back in 2010, especially their frustration at the lack of progress in the negotiations between the EU and emerging economies, their proposals were largely mirrored in the final regulation that was approved in 2012.

Crucially, exporters’ calls for a system that created leverage for the EU in its trade negotiations with emerging economies won over the arguments of development NGOs. These had called on policymakers to maintain the current system as well as consider the developmental impact of preferences.

By putting its interest in creating leverage with emerging economies before the developmental impact of the reform, the EU appears to have privileged commercial interests over developmental considerations, lofty rhetoric notwithstanding. Rather than promoting development goals, narrower self-interest has prevailed, suggesting that the EU is perhaps not as uniquely ‘normative’ a power as it often claims to be. 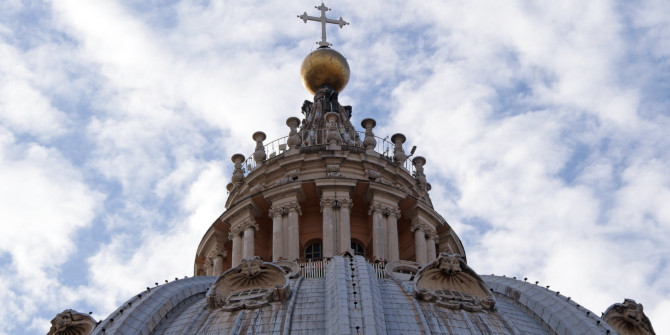