Clegg ‘lost’ to Farage because he was viewed as representative of the political class, not because the public disagree with him on the EU

Clegg ‘lost’ to Farage because he was viewed as representative of the political class, not because the public disagree with him on the EU

Ahead of the European elections, the leader of the Liberal Democrats, Nick Clegg, and the leader of UKIP, Nigel Farage, held two much publicised debates on the UK’s EU membership. Although the general consensus from polling was that Farage came out on top, Nick Anstead finds that there were in fact different discussions going on, with the two party leaders talking across each other. He writes that Clegg seems to have lost the debates because he was perceived to be the representative of the political class against Farage’s plucky ‘everyman’. He argues that breaking this dynamic is the real challenge for mainstream politicians.

A couple of weeks ago, I blogged on the Insight blog about the incentives for both the Liberal Democrats and the United Kingdom Independence Party (UKIP) to take part in the two-way Nick Clegg vs. Nigel Farage debates. Broadly, the argument was that – as the two parties were not really competing for the same base of voters – the debate would ultimately serve the interests of both parties.

However, and just as important for how politics is going to play out in the future, the debates did make very evident some of the rhetorical dividing lines that currently exist in British politics. In order to better understand this, I conducted a very quick study of post-debate media coverage.* Broadly, the sample I worked with was newspaper coverage of the debate published between 27 March 2014 (the day after the first debate) and 4 April 2014 (two days after the second debate). You can find the results of this search in this document. In total, it includes approximately 480 articles, containing some 178,000 words.

A very simple way of visualising this is a tag cloud. With this method, the size of the word equates with how frequently it occurs in the text. A tag cloud of all the newspaper articles’ text is shown below. This diagram tells us a few things about the post-debate discussion. Certainly, questions of identity were heavily emphasised (English, Britain, British, Europe, European etc.). Additionally, what political scientists Frank Esser and Paul D’Angelo term “meta-coverage” seems to have been at the forefront of media reporting. This is when political reporters focus on who has won or lost, and the political strategies that have led to these outcomes (so in this tag cloud, words such as per cent and polls might represent meta-coverage, while references to the other absent party leaders might also fit into this category). Although they do feature, words like immigration and jobs are surprisingly small. 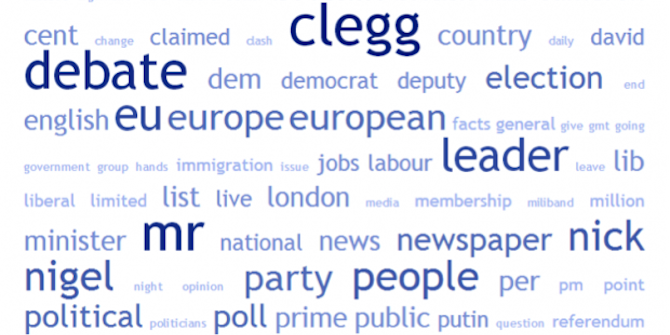 Note: For more information on the methodology, see the author’s methodological note.

However, it should be noted that, as a method to understand large bodies of text, tag clouds have a number of important limitations. The first issue is a simple presentational point. The size of words reflects not only the frequency of their use, but also the length of the word (so in the above example, the size of ‘debate’ and ‘mr’ reflects a similar number of uses, even though the former is far more prominent). Additionally, tag clouds only tell us how often words were used in a piece of text, but fail to tell us much about the relationships that exist between words.

In order to overcome this difficulty, I deployed a second method using the text analysis software package QDA Miner / Wordstat. First, I extracted every sentence in the dataset that referenced Farage or Clegg. I then had two datasets which I could compare. There are a number of things that can be done with this kind of data, but a simple and quick way of examining it is simply to look for the largest discrepancies between them: i.e. words that appear a lot more in one dataset than the other. I did this for both politicians. The findings are presented in the Table below.

Table: Most distinctive words in Clegg and Farage focused sentences 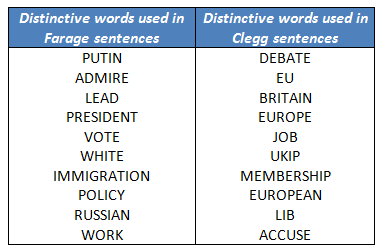 Note: As above, see the author’s methodological note for more detail on the calculations.

It should be noted there are huge limitations to the “quick and dirty” method I have employed here. The dataset does not examine what the candidates actually said, but instead only media coverage of the debates. Sadly, there is not yet a full transcript of the debates available. Furthermore, the analysis excludes social media commentary (although the think tank Demos had an excellent go at doing some of this kind of analysis on the debate night itself). The method I have used is also relatively crude, and could be improved by either more rigorous quantitative significance testing or more qualitative human engagement with the raw data.

Nick Anstead – LSE, Media and Communications
Nick Anstead is an Assistant Professor in the Department of Media and Communications at the LSE. His research focuses on the relationship between existing political institutions and new media, covering such topics as the impact of the Internet on politics and government (especially e-campaigning); the history and future development of political parties; and encouraging participation in civil society.