Luxembourg traditionally holds national elections at the same time as European elections. As Martine Huberty writes, however, the 2014 vote will mark uncharted territory as the country was forced into holding snap elections in October last year. She argues that while the national vote is relatively difficult to predict at this stage, the key issue for the country is likely to be determined elsewhere, with Luxembourg’s former Prime Minister Jean-Claude Juncker also standing for Commission President.

Luxembourg’s European Parliament (EP) elections have always been a rather quiet affair; in practice they have always been ‘second order’ elections, as they were held simultaneously with the national parliamentary elections. With only six seats in the EP for a country that feels genuinely in favour of European integration, this is not surprising. This time, however, the situation is different, and snap elections in October last year have thoroughly shuffled the cards. Vice President of the European Commission Viviane Reding will have to make do with being a simple MEP, but the question is whether the country’s former Prime Minister, Jean-Claude Juncker, will be elected EU Commission President, or whether Charles Goerens (ALDE) or Claude Turmes (Greens) becomes the new EU Commissioner from Luxembourg.

Luxembourg’s electoral system for the European Parliament elections is based on a single district and list system, with the D’Hondt method being employed to allocate seats. Each voter has the same number of votes as there are seats (six). Panachage or cross-party voting is permitted. A voter may vote for an entire list, vote for candidates from more than one list, or choose individual candidates from a particular list. Seats are allocated proportionally to the number of votes obtained by a candidate or a list.

As for national elections, voting is obligatory. In the 2009 elections, 90 per cent of voters submitted a vote, and of those, 90 per cent submitted a valid vote. Residents from EU member states have to be registered on electoral rolls no later than 28 February 2014: a deadline which has often been criticised as being too early. Table 1 below shows the 2009 EP election results in Luxembourg.

Table 1: Results in the 2009 European Parliament elections in Luxembourg

The current distribution of the six MEPs is three for the centre right CSV (Astrid Lulling, Georges Bach, Frank Engel), one for the socialist LSAP (Robert Goebbels), one for the Greens (Claude Turmes) and one for the liberal DP (Charles Goerens). Astrid Lulling and Robert Goebbels, two political heavyweights and vote winners for their respective parties (CSV and LSAP), are not running again. The battle of these elections will be for the current third seat of the CSV. The full list of candidates that have been put forward by the parties for the elections is shown here.

This is the first time national and European parliamentary elections have been decoupled due to the snap elections held in October. However it seems highly likely that Luxembourg will reconfirm the ‘second order’ character of EP elections. The start date of the electoral campaign is 5 May, a mere three weeks before the EP election in order to keep costs to a minimum. Last October’s national elections campaign lasted five weeks. Electoral manifestos have not yet been published by the major parties (they used to be incorporated in the national manifestos; only the Greens proposed an EP manifesto which they had taken over from the European Greens). No opinion poll data has yet been published so it is difficult to speculate on the outcome.

Luxembourg, as a genuine pro-EU country, will probably continue to go against the European wide trend of voting for Eurosceptic or anti-establishment parties. Luxembourg only has three (very small) parties which can be classified as soft Eurosceptic: the ADR, the PID and KPL. It seems unlikely that these will see significant gains or get a seat. The most interesting result from the small parties will be that of the newly constituted Pirate Party, which gained just over 2.9 per cent in the October 2013 national elections and draws on younger voters.

The October elections produced a coalition government composed of the DP, LSAP and Greens with Xavier Bettel from the liberal DP becoming Prime Minister, relieving Jean-Claude Juncker of the post he had occupied since 1995. While the CSV had gained the most seats in parliament, due to several scandals and disagreements between the CSV and its coalition partner LSAP, it was sidelined and ousted from government for the first time since the 1970s. Table 2 below shows the results of the 2013 election.

Table 2: Results of the 2013 national elections in Luxembourg 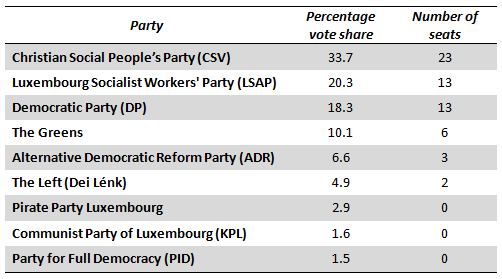 The CSV has since stubbornly accused the other parties of not respecting the will of the people and has been unable to find its place on the opposition benches. Opinion polls from December 2013 show that the preferences for a CSV-DP coalition (46 per cent) and for the actual DP-LSAP-Greens coalition (47 per cent) were almost identical and that the CSV still had significant support from the population to become a governing party. Furthermore, the levels of perception of competence were still highest for Jean-Claude Juncker, far ahead of his opponents Bettel and Asselborn. All these things may still play in the CSV’s favour in the European elections, but as Juncker has decided not to stand in the election and Astrid Lulling has been forced to retire, the CSV may well lose its third seat.

The personnel carrousel and the Juncker factor

The most interesting results of the EP elections in Luxembourg will actually have nothing to do with the stated preferences of Luxembourg’s electorate. Jean-Claude Juncker, now parliamentary leader of his party, has found that role unsatisfactory and has been elected as EPP candidate for the post of European Commission President. If he gets elected, this will have significant implications for politics in Luxembourg. Prime Minister Bettel from the DP has supported Juncker’s candidature; which might be interpreted by some as an attempt to stop Juncker threatening him at the national level during this legislature.

If Juncker is chosen as President of Commission, this may give the CSV the chance to renew itself in terms of personnel, if not policies. However, Juncker may also see his five year term in Brussels as a ‘time-out’ from national politics only to return triumphantly as the next Prime Minister. His personal support among the electorate is still incredibly high (above 80 per cent), and this will be a distinct possibility, if his party has not shaken off his spell until then.

If Juncker is not elected President of the Commission, he has indicated that he does not enjoy sitting on the opposition benches and may look for another international post for the duration of this legislature. In any case, Juncker is still a political force to be reckoned with in Luxembourg and should he leave, he would give the current coalition government some breathing space.

Kevin Cunningham and Simon Hix have shown that Juncker would probably have more support in the upcoming European Parliament than Schulz, but it is nevertheless unclear whether some groups such as the ECR or ALDE will actively support his candidacy. Moreover, as they state, it is still possible that EU governments could impose their own candidate on the Parliament, which may be easier if neither Juncker nor Schulz command a majority after the election. This is a clear possibility and would fall in line with previous occasions in which a third candidate for President suddenly appeared on the scene. Juncker’s outspoken approach and staunch pro-Europeanism may ultimately play against him.

Furthermore, Viviane Reding, current Vice President and EU Commissioner for Justice, Fundamental Rights and Citizenship will have to leave the Commission, whether Juncker fails or wins, because she is a CSV member. She will probably take up her MEP mandate this time; her votes will not be distributed to the other list candidates, especially to Frank Engel, current MEP and occupying the shaky third seat on the CSV list. With no opinion polls available, it is still too early to speculate which party will fill it. If Juncker fails, Charles Goerens, a popular political heavyweight in the DP and respected MEP, will probably be offered a Commission post. Or Claude Turmes from the Greens, a long standing MEP with significant popular support, may be offered the post as a result of intra-coalition agreements. It is unclear whether the LSAP candidate Mady Delvaux-Stehres is in the running for a Commission post.

The effects of the October 2013 elections are palpable on the upcoming EP elections. Not only because for the first time, there is a chance that Europe and the EU will be discussed more thoroughly in the election campaign than previously, when national and European parliamentary elections were held simultaneously and little space was devoted to European issues.

Nevertheless the second- order character of the elections is still prominent. As the new coalition government is in the process of putting its ducks in order, the EP elections will be a first vote on the performance of the three parties. The fact that the CSV is out of government means that two prominent politicians have had to or will have to leave their seat: Juncker and Reding.

While Reding’s future is probably safe in the EP (though it remains possible that she will try to find a more suitable job elsewhere), Juncker’s is more precarious than ever. What matters is not so much who the voters will elect this time, but what will happen in the rest of the EU and more specifically, what the European Council will decide.

Note: This article gives the views of the author, and not the position of EUROPP – European Politics and Policy, nor of the London School of Economics. Feature image: Jean-Claude Juncker, credit: European People’s Party (CC-BY-SA-3.0)