The EU has an incentive to attract highly skilled migrants from neighbouring countries. Yet as Alexander M. Danzer and Barbara Dietz write, there are a number of barriers which inhibit the ability of the EU to attract talented migrants from Eastern Partnership states. They note that one of the main obstacles is that temporary migrants from Eastern Partnership countries often suffer from occupational downgrading in the EU, with employment that fails to take full advantage of their skills. Alleviating these problems would allow the EU to better compete against other destinations, such as Russia and the United States.

While several member states of the EU are in dire need of immigration to secure their future demographic balance and labour market stability, populists across the European Union are currently stoking xenophobia and fears of welfare losses. To actively manage immigration, the EU has developed the ‘Global Approach to Migration and Mobility’ (GAMM) which grants close geographic neighbours priority concerning migration exchange.

Of particular relevance for immigration are those post-Soviet countries along the vast eastern border of the EU that participate in the EU’s Eastern Partnership (EaP): Armenia, Azerbaijan, Belarus, Georgia, Moldova and Ukraine. The EaP countries are interesting because their populations are comparatively well-educated given their living standards. A household survey (INTAS survey) that was conducted in 2006 across EaP countries (excluding Azerbaijan) allows for a first representative assessment of pre-crisis migration patterns toward Russia, the EU and overseas destinations (mainly the United States and Canada).

Education and skills shape the destination patterns of temporary EaP migrants, of whom the majority (58 per cent) move to Russia, while only 35 and 7 per cent target the EU and overseas destinations. Russia is the predominant magnet for low educated migrants, while EU countries attract better and overseas destinations attract the best educated movers. These flows are consistent with the comparatively low migration costs and relatively easy access to the Russian labour market.

While significant migration and employment barriers aggravate mobility toward the EU and overseas countries, the preference of the best and brightest for North American destinations suggests the EU lacks attractiveness as a destination. Foreign language competence channels migrants toward those destinations where these skills are productive. Temporary migrants with English language knowledge are significantly less likely to move to Russia, but head toward EU and overseas destinations. Knowledge of Italian, Spanish, French or Portuguese directs temporary migrants to the EU, but discourages them from moving to Russia or overseas destinations.

Migrants are aware of the barriers they face abroad and deliberately improve their skills through language and technical training before entering foreign labour markets. In planning a work episode abroad, EaP migrants most often acquire or improve destination-specific languages and knowledge about living and working conditions. As shown in Chart 1, qualification courses to improve technical or working skills are undertaken by only a small fraction of migrants. 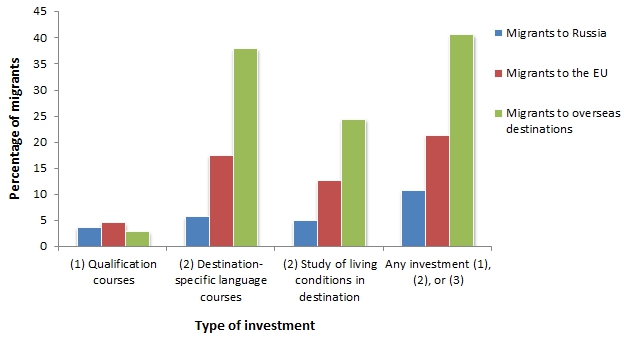 Migrants to Russia have few incentives to upgrade their skills prior to departure, owing to comparable educational systems, the easy transferability of skills and the prevailing Russian language proficiency in EaP countries. Quite differently, more than 20 per cent of migrants to the EU try to compensate for some of the labour market barriers by investing in language skills and the study of destination country specific living conditions. Migrants to overseas destinations are especially well prepared: two out of five invest in some kind of human capital.

Upon arrival, temporary migrants from EaP countries are relatively better educated than the average native population in several (predominantly southern) EU destinations. This neither holds for Germany nor for Russia, two countries in which the vast majority of the working age population has secondary educational attainments, as shown in Chart 2. Since at least four out of five migrants from Eastern Europe hold a secondary degree, immigration from the East has the potential to enhance the educational composition of some less well-endowed EU destinations.

Chart 2: Percentage of migrants from Eastern Partnership countries with at least secondary education in comparison with percentage of native population with the same level of educational attainment (ages 25-64) 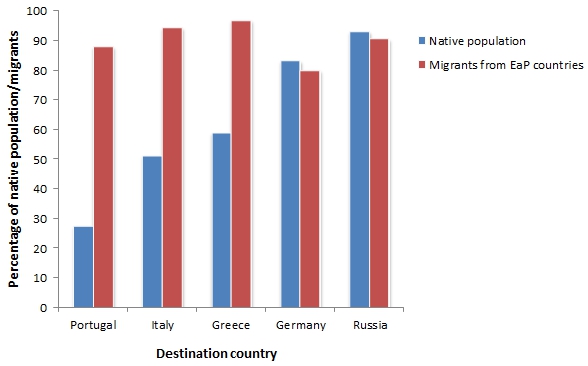 The comparatively high qualification of EaP migrants raises the question whether their formal skills yield economic returns abroad or whether these are devalued and result in occupational downgrading. The latter is defined as holding a lower occupational class abroad – such as elementary, agricultural or construction occupations – than at home before emigration. Migrants without university education face a comparatively higher chance of suffering from occupational downgrading when moving either to the EU or overseas.

Although university graduates are generally more affected by occupational downgrading than the low educated, the chance of keeping their occupational status was higher in EU or overseas destinations compared to Russia. Hence, the better educated have incentives to go west while those with lower education fare relatively better in Russia. Nevertheless, temporary migrants from EaP countries often suffer from occupational downgrading in the EU, indicating a waste of their skills. Those who have invested in language and technical skills before departure tend to suffer less from occupational downgrading. This observation suggests that migrants work below their formal qualification levels not because of discrimination, but because their original skills are hard to transfer across economic and political institutions.

While the EU intends to compete for highly qualified workers, it does not (yet) succeed in EaP countries. The educational background of immigrants from this region is lower than of those staying at home or choosing overseas destinations. Successful EU migration policies might encompass screening procedures regarding the recognition of certificates and experiences of the highly skilled as well as reducing entrance and labour market barriers for those who qualify. Given that skill shortages differ across EU countries, a strategy to define and attract regionally highly-demanded skills might be preferable to an untargeted recruitment of high-skilled migrants.

Note: This article gives the views of the authors, and not the position of EUROPP – European Politics and Policy, nor of the London School of Economics. Feature image credit: Jen Waller (CC-BY-SA-3.0)

Alexander M. Danzer – University of Munich
Alexander M. Danzer is Assistant Professor in the Department of Economics at the Ludwig-Maximilians-Universität Munich (Germany). He is also Research Fellow at the Centre for Research and Analysis of Migration (University College London) and at the Institute for the Study of Labor (IZA Bonn). His research interests include migration and integration of immigrants in Europe as well as labour and development economics.

Barbara Dietz – Institut für Ost- und Südosteuropaforschung (IOS)
Barbara Dietz is senior researcher at the Institut für Ost- und Südosteuropaforschung in Regensburg (Germany). She is also Research Fellow at the Institute for the Study of Labor (IZA Bonn). Her research interests include migration and integration of immigrants in Europe as well as ethnic relations and migration policy. 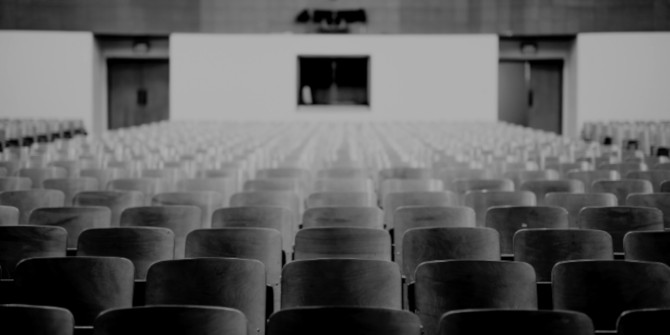