The results of the European Parliament elections have prompted a number of European politicians to call for a reform process aimed at enhancing democracy and solving existing issues within the EU’s institutional framework. Renaud Thillaye writes that while ‘reform’ may be the mantra of the day, what European voters really want are tangible results, such as improved economic performance and stronger social policies. He argues that any EU-level reform effort is unlikely to alter public opinion and that only by achieving real results for citizens can support for the integration process be secured.

The European Parliament election results have left those who believe in a more united Europe in a state of shock. Yet, a new battle is only starting: how should the results translate into policy? What can the EU change to start restoring its collapsing legitimacy?

Many pundits and newly elected members of the European Parliament have thrown their weight behind the centre-right Spitzenkandidat’s nomination to the Commission’s presidency as a way to boost the EU’s democratic credentials. Others are more reluctant, pointing out that EU treaties give the European Council some margin to look elsewhere. In this case, they might be right in thinking that Jean-Claude Juncker is rather a ‘man of the past’ and not exactly the kind of fresh impulse the EU needs. It is a fascinating battle, revealing a lot about where the balance of power lies in Europe today. But regardless of who is appointed, this process will not do much to soothe Eurosceptic feelings.

An increasing number of leaders and commentators are looking to ‘EU reform’ – the word on everyone’s lips. In some respects, this is a great British victory. Eighteen months after David Cameron’s Bloomberg speech, having won the backing of most Northern European leaders, even François Hollande conceded on 26 May that the EU had become too complex and intrusive. That Brussels should show restraint, leave room for more flexibility and focus on ‘big things’ now seems to be common wisdom, as is the idea of greater involvement by national parliaments. As Kalypso Nicolaïdis argues, especially in the Eurozone national parliaments have a role to play by endorsing Brussels’ fiscal and economic recommendations.

However, the notion of ‘EU reform’ is vague and by-default rhetoric that offers no tangible agenda. As Richard Corbett puts it, reform is ‘a process, not an event’. The EU has been in a continuous state of reform for decades and is already quite flexible as a result. Subsidiarity, impact assessment, opt-outs, enhanced cooperation, yellow cards: the legal arsenal is ready and waiting, it is up to policy-makers to exploit it. This does not leave David Cameron much to renegotiate and makes the UK’s ‘Europe dilemma’ look even worse, as Roger Liddle suggests. Under great pressure from UKIP and Eurosceptic Tories, the British prime minister can only disappoint his own camp if he goes on inflating his promises.

Furthermore, there is evidence that Europeans want results more than reform. Eurobarometer surveys regularly find that the public expects the EU to be more effective when it comes to tackling the economic crisis, unemployment, and immigration. Despite the euro’s disgrace, there is no majority behind the idea of returning to national currencies. According to Pew Research, favourable attitudes to the European Union have even started to rebound in seven of the largest member states this year; the number of those who believe that economic integration is beneficial to their country among these states is up to 38 per cent from 26 per cent last year.

Chart 1: Percentage of citizens in selected EU states who have a favourable view of the EU (2013-14) 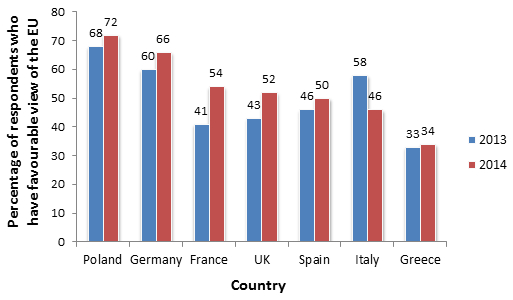 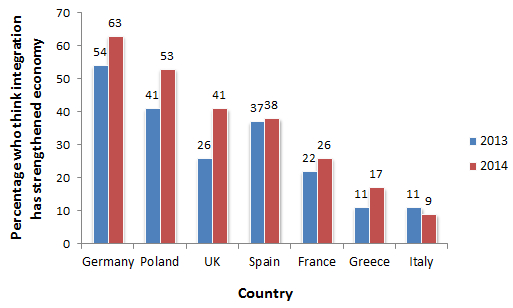 Perhaps it is time to acknowledge that if the EU wants to deliver on ‘big things’ and create foundations for new forms of wealth creation in its member states it requires precisely the type of policies that are deemed intrusive and unpopular. Unleashing the services single market’s growth potential will inevitably face vocal and anxious constituencies. Boosting digital trade and innovation means taking on national copyright and privacy regimes. It will take a lot of mutual investment, tax and regulatory convergence to build a genuine single energy market and to withstand the challenges posed by Russia. Finally, making the euro more stable will likely necessitate accepting greater solidarity and mutual interference.

Talking about ‘EU reform’ is a poor remedy to these challenges. Only strong leadership and the ability to make significant breakthroughs on key strategic issues may change the public’s perception of the EU and its output. In exchange for greater openness and competition, beefing up the EU’s social dimension is more than ever a necessity. The EU cannot go on being seen as weakening national welfare states and democracies. It needs to become a more functional ‘risk community’ within which there is space for social policy coordination and mutual insurance.

This might be too ambitious a task for EU institutions crippled by different visions of the world and low mutual trust. Nevertheless, inside or outside the EU, European integration will continue. It is up to political leaders, businesses and civil society to come up with imaginative solutions that cater to the people’s interest. By doing so they should not get excessively obsessed by procedures and theoretical debates about who holds democratic legitimacy in Europe.

Despite a historic fall in spending, last week’s budget deal will help to increase the EU’s effectiveness.