In an interview with LSEE’s Tena Prelec and EUROPP’s editor Stuart Brown, Nikola Poposki, Foreign Minister of Macedonia, discusses efforts to promote gender equality, the dispute between the government and opposition parties which followed elections in April, and why the name dispute with Greece should be less about ‘winning’ the argument and more about building a partnership with neighbouring countries. 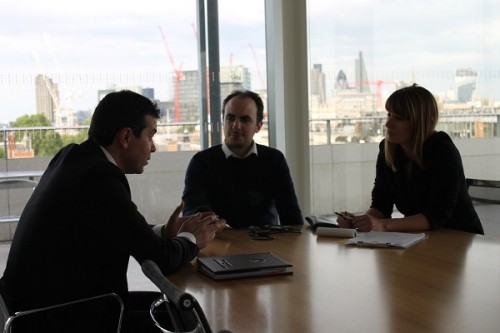 You came to London to attend the ‘Time To Act’ summit on violence against women in warzones. Why is this important for you?

Coming from a region that was struck by extreme violence not long ago, we have a duty to take interest in this important topic. It would be quite ambitious to say that with this event we will be able to end sexual violence in warzones, but we will have at least raised awareness about the problem, and more people will be standing behind the cause.

In terms of the wider issue of gender equality, we have been actively working on this topic as members of the UN Human Rights Council. Raising awareness is not enough: we are trying to provide tools for women to make a standpoint on a number of issues linked to gender equality. Recently a new law has been passed in Macedonia, according to which every third MP needs to be a woman.

Greece pulled out of the summit because of the controversial issue over Macedonia’s name. Relations between Skopje and Athens have arguably deteriorated in the past decade – when inter-ethnic violence broke out in Macedonia in 2001, Greece was among the first to send military support. How do you explain this change?

In real terms, this does not correspond to reality. Relations between the two countries are excellent when it comes to personal or business interactions. Macedonians are among the top three nations visiting Greece for tourism, and Greek companies figure prominently among the most important investors in Macedonia. The only problem that still remains is an alleged name issue that is being misused to block Macedonia’s accession to both NATO and the EU.

But on the ground this is not really reflected, and that is possibly one of the reasons why the incentives for the Greek government to deal with this issue are extremely low. Even when you look at it from a historical perspective, I tend to believe that relations on the people-to-people level are not worse than before, and are in fact even better than they used to be some time ago.

On the diplomatic level we have tried to change the atmosphere and we have been working quite extensively on that. We have very clearly communicated that our objective is not to have a winner and a loser – even though international law has proved to be on the Macedonian side according to the International Court of Justice, which ruled that it is illegal for Greece to block our accession process. We want to have a win-win situation where both countries are comfortable with Macedonia’s membership.

The major obstacle is different levels of motivation – for us it’s a strategic objective, getting into the NATO and the EU and thus finding a solution to this situation; for Greece in the current context it is nowhere in the top 100 priorities of the government because of the economic crisis and a number of other issues. On their side there is close to zero interest to seriously deal with this situation and move forward. This is something that needs to be changed in order to overcome it.

Some commentators have argued that Macedonia has deliberately sought to antagonise Greece. Do you think that projects such as Skopje 2014 – which involve naming infrastructure projects after figures such as Alexander the Great and constructing monuments associated with the historical region of Macedonia – bring you any closer to the solution?

We have seen different kinds of excuses being presented for not allowing Macedonia to become a member of NATO and the European Union. One of those excuses has been the fact that we are implementing a project called Skopje 2014, which is mainly an infrastructure project and offers no valid arguments to be presented as a political weapon for blocking Macedonia’s accession. The best proof of this is that there was a long period in which no project of this kind existed, but our accession was still blocked by Greece.

Earlier this week another of Macedonia’s neighbours, Bulgaria, decided to suspend construction of the South Stream pipeline which aims to transport gas exports from Russia to the region. What is Macedonia’s policy on this?

We do need to bring more gas and energy into Macedonia and the whole region, so the suspension of South Stream is likely to cause great economic harm to the countries in South Eastern Europe that had initially signed up to the project. In Macedonia we are in favour of finding an EU-Russia brokered solution allowing gas supplies to be channelled through South Stream – we would be very supportive of such an agreement.

After the 27 April elections in Macedonia, the opposition refused to take up their seats in the Parliament due to claims of an unfair process. How do you explain this to your European counterparts?

It is already quite difficult to explain it to ourselves, and I think that those who are not stepping into the parliament have some difficulties in explaining it as well. This judgement call has been made by the Social Democrats only after seeing the results of the elections – which were particularly unfavourable for them. It is definitely related to internal political quarrels within the party.

We do pay a price for this behaviour as a government. As you rightly pointed out it is difficult to describe this and identify any logical reason for it, yet it is being associated with the country and the government. It is a duty of a politician who runs for office and is elected to go to Parliament and represent those who have voted for him. I think this is a basic principle. I do believe that our political culture should be shifting in the direction of people taking their responsibilities.

In the run-up to the elections there were concerns over media and funding access, with both alleged to be disproportionately in favour of the ruling party. What is your government doing to promote freedom of expression?

I think this is one of the key factors. We definitely cannot have an environment that is conducive to reforms unless we have free reporting and quality media. Media freedom is part of a dialogue we are conducting with the European Commission in the frame of high level accession talks. Both the opposition and the coalition are represented in this dialogue.

The story about lack of media freedom in Macedonia has been hugely inflated since we have had a case of one media magnate being tried for money laundering and a number of other criminal acts – which led to the closure of some media outlets, most notably the A1 TV channel. No one has objected to the facts of the case and to the merits of the judgment, but this has been extrapolated and made to apply to the entire sphere of freedom of expression.

Why was it not possible to target individuals, instead of shutting down whole media outlets?

There was a court ruling that condemned them on the basis of the damages caused by its owner. If you examine the judgment closely, these are publicly available facts, and no one ever disagreed with the court’s conclusions. Once the damages Ramkovski (the owner) was convicted of were put in the balance sheet together with the assets, the outcome was the closure of the outlets.

In my view, the more media we have, the richer our environment will be. One thing I cannot contradict is that in Macedonia we have a confrontational way of doing politics, which is reflected in our media. There are as many different views as there are newspapers or informational websites – and we have the highest internet penetration rate in the region. There was one media case and applying this to the entire media sphere is not quite the right equation.

The best we can do is to have an active dialogue in the institutions to determine any needed regulatory improvement. Last year, after the local elections, we have taken up the recommendations from the OSCE – including the suggestion to decriminalise defamation. According to the OSCE and the EU, our legislation is now one of the best in the area.

What needs to be tackled now is effective implementation – this is one of the priorities of the government. We cannot neglect the fact that it is one of the accession negotiation chapters. What makes me feel confident is that Macedonian people have now reached a certain level of democratic maturity – we make judgements on the basis of a set of diverse sources of information.

Finally, given some of the controversial issues we have discussed, do you have a message for the Greek people?

Both Macedonia and Greece should see each other as partners – which we are already in real terms – and as equally worthwhile members of NATO and the EU. It is in the mutual interest of both countries to overcome the artificially constructed name issue. If we overcome that, we are settled. We don’t want to ‘win’ the naming dispute with Greece – we want to be real partners.

Note: This article was posted simultaneously on the LSEE blog and gives the views of the interviewee, and not the position of EUROPP – European Politics and Policy, nor of the London School of Economics.