One of the key criticisms of European Parliament elections is that low turnout prevents the Parliament from genuinely being able to confer legitimacy on the EU’s legislative process. Herman Lelieveldt writes that while there was a small increase in turnout in the 2014 European elections, the overall trend of declining turnout necessitates a radical reform to improve the EU’s democratic legitimacy. He suggests returning to a ‘dual mandate’ system through which national parliaments appoint a proportion of their members to split time between the European Parliament and the national level.

With a turnout that was only slightly higher than five years ago and a general consensus that many of the dissatisfied voters stayed home, the new European Parliament continues the paradoxical trend of declining legitimacy despite a systematic increase in its powers over the last decades. If it comes to mobilising more voters it is safe to conclude that the experiment with the Spitzenkandidat has been an utter failure. Apart from maybe in Germany, the contest did not generate much excitement in the member states nor did it bring more voters to the polls. Hence we are left with another election in which a majority of the member states (17 out of the 28) saw turn-out again decline, as shown in the Chart below.

Chart: Turnout in the last two European Parliament elections in each EU state 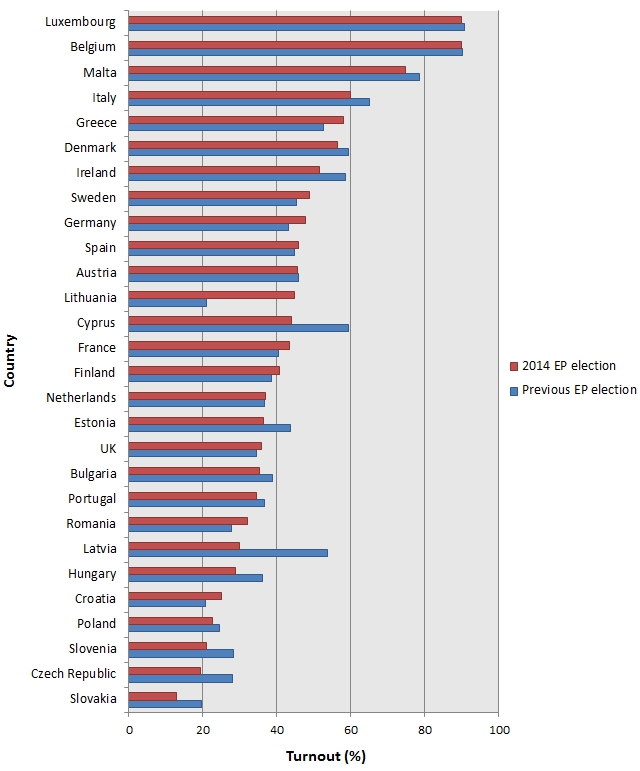 This trend is seriously compromising the EP’s stature and legitimacy. In the long run it undermines the feasibility of the EU as well. It is time therefore to consider more drastic changes to counter this trend. One possibility is to make MEPs members of their own parliament again. This so-called double or dual mandate was of course the situation up until 1979, when the first direct elections were introduced. After that MEPs were initially allowed to continue combining their membership with that of their national parliament, but a 2002 Council Decision abolished this possibility.

The major reason for doing so was the perceived impossibility to combine memberships of two (and sometimes even three) parliaments, given the workload each of them already generates. This, by any standard, is a strange argument. If ministers of the EU member states are able to combine work in domestic politics with work in the EU, parliamentarians should be able to do the same.

So what would it look like if we would consider making MEPs members of their own parliament again? We would go back to pre-1979 times and let national parliaments send their members as delegates to the EP, based upon the outcomes of national elections. There are four reasons that make re-introducing such a dual mandate beneficial. First and foremost it would give the EP its much sought after legitimacy. Given the fact that the turn-out at national elections remains at much higher levels, it would be in a far better position to claim to represent the EU citizens than is currently the case now. As such, this would increase its leverage and standing relative to the other institutions.

Second, the dual mandate also emphasises the interconnectedness of EU and national politics. As only those political parties that succeed in getting seats at the national level would acquire seats in the EP, it would benefit parties that have a comprehensive view on politics that includes the national and EU level, while making life difficult for single-issue parties that solely focus on the EU electoral arena. And just as the political composition of the Council of the European Union changes gradually, following every national election, the composition of the EP would change in a similar fashion.

Third, the dual mandate would reduce the animosity that we have seen developing between national parliaments and the EP over recent decades. Those national parliaments were placated with a complex and burdensome system of ‘yellow’ and ‘orange’ cards that would allow them to protest unwanted transfers of sovereignty to the EU level. The system does not resolve the inherent tension between MPs and MEPs. Making MEPs members of their own parliaments would make for a much more effective and efficient check on such transfers and fully integrate debates on EU legislation in the ordinary legislative work of party groups back home.

Last but not least, a dual mandate would relieve us of the bloodless and schizophrenic election campaigns that we have been witnessing over the past months. A campaign that did not revolve around the way the EU handled the financial crisis or the conflict in the Ukraine, but that in fact consisted of 28 parallel campaigns conducted by national party leaders standing in for their EP candidates and debating national political issues.

On its website, the EP prides itself on being the ‘only directly elected body of the European Union’ with its members being ‘there to represent you, the citizen’. Forty years after the first direct elections this claim is becoming ever more difficult to uphold. However a dual mandate would immediately fix this legitimacy problem. More than ever, the momentum for such a proposal seems to be there: voices from both the right and left are willing to seriously consider it. From Conservatives such as London mayor Boris Johnson who considers it a way to keep the UK in the EU, to Social Democrats such as Dutch Foreign Affairs Minister Frans Timmermans, who has referred to it simply as a ‘good idea’.

Obviously the EP would be reluctant to agree to such a proposal. As a compromise it might be necessary to offer something in return, such as the right to initiate legislation. This, after all, is what most MEPs want, as research by Roger Scully and others shows. It is also a prerogative that more than ever would require MEPs to have a strong democratic mandate that derives from a majority of the citizens and not just those turning out for EP elections. 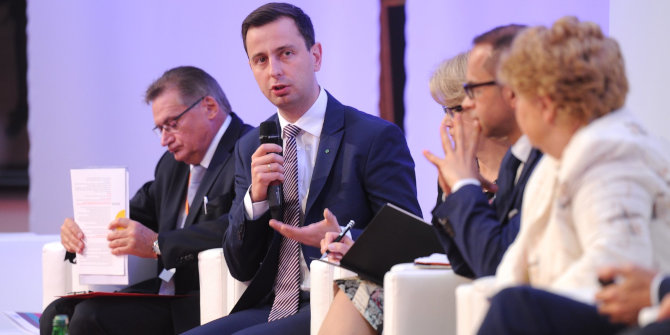 What are the prospects for the Polish Peasant Party?