David Cameron has asked for a public vote to be held in the European Council on the nomination of Jean-Claude Juncker as the next President of the European Commission. Sara Hagemann writes that this would be a bold step as it would challenge the tradition of ‘consensus politics’ which has dominated key decisions over European integration in the past. She argues that this should be welcomed for reasons of transparency and democratic accountability, but that the debate nevertheless requires some nuance as there are both ‘good’ and ‘bad’ kinds of transparency.

David Cameron has been accused of mishandling the negotiations over the appointment of the next European Commission President, which will be a priority for the governments at a European Council summit this week. It is not the first time that his continental partners regard the UK with some confusion: The UK often voices a need for profound ‘reforms’ of the EU – usually to make it more ‘accountable’ and ‘legitimate’ – but there are few suggestions for such reforms when approached by its continental partners. A number of European government representatives to the EU have, off the record, characterised the UK government as ‘unconstructive’ and seemingly without an ‘understanding of how business is done in Brussels’. And so it seems: In a meeting in London with Council President van Rompuy this last Monday, Cameron demanded to have a public vote at the Council Summit when the governments decide on the nomination of Mr. Juncker.

The European Council rarely decides by explicit voting, but rather seeks to find compromises which the Chair (President Van Rompuy) can then confirm when they meet the decision rule in place. This is either a unanimity requirement or a qualified majority. Hence, Cameron’s suggestion to adopt the decision of Mr. Juncker as next Commission President by public vote is a direct challenge to the ‘consensus’ culture that prevails in Council meetings, as it will force every Head of Government to explicitly record a ‘Yes, ‘No’ or ‘Abstention’ on the matter. None of them can hence justify the outcome by saying ‘this is what the EU decided’. Rather, in this situation they will all be forced to explain ‘this is how we voted, and we went with (or against) the majority for reason x, y and z…’

Some people have already argued that it will not matter whether the decision is made by explicit voting or not. Juncker looks set to be given the post. I believe a public vote will be significant, and that it reflects an increase in the contestation of EU politics more broadly. The Figure below shows how the number of contested votes in the Council of the European Union (or ‘Council of Ministers’, as it was previously called and where sectorial ministers meet) has been distributed across the different member states between 1999 and 2013.

Figure: Number of contested votes and formal statements by EU states in the Council of the European Union (1999 – 2013) 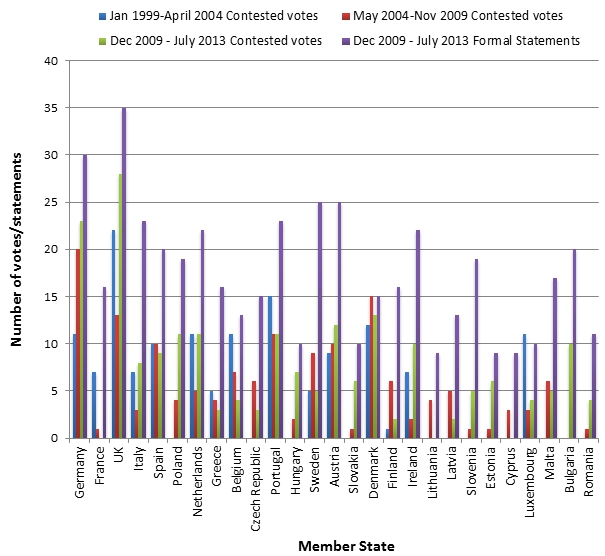 Note: Although the figure is not of the Heads of Government meetings in the European Council, it shows how governments have contested EU legislation in the Council of the European Union, where government ministers negotiate and adopt EU legislation on an ongoing basis. The data is divided into three periods to mark the 2004 enlargement and the Lisbon Treaty. The purple column shows governments’ use of ‘formal statements’ which are policy statements to explain or justify their position on a proposal.

The reasons why a vote on Juncker matters are two-fold: First, it will matter if the UK, as one of the largest countries in the EU, is publicly outvoted in the Council. This would set a precedent that other big member states have serious concerns about, and which will make it hard for the Council’s usual ‘package deals’ to slip through unnoticed. It will undoubtedly also feed into the UK’s domestic EU debate if Cameron is outvoted on such an important issue. This will be particularly important ahead of the UK elections next year.

However, the reverse and second set of reasons why it matters is that public voting is a strong tool for holding representatives accountable for their decisions. A number of European parliaments are currently exploring ways to develop their scrutiny procedures in European affairs, whether formally or regarding more informal practices. The main conclusions from these exercises so far are that much is needed regarding national parliaments’ insight into decision-making in the European Council and the Council of the European Union.

Too little is known about how governments reach agreements, and who’s actually in favour or opposition to the proposal. At the moment, governments only record their opposition if they have strong reasons for doing so. And rarely do we see governments explicitly explain their support for EU decisions. Public and detailed information on voting records would help this process, and would make it easier for national parliaments to get more closely engaged with EU politics as well. Hence, a public vote in the European Council on such a high-profile issue as the Commission President nominee could well compound the trend of increased voting in the Council of the European Union and now also the European Council.

‘Good’ and ‘bad’ kinds of transparency

All this is not to argue that we need transparency on all levels and in all aspects of EU politics. Research has shown that increasing transparency can at times have counter-productive effects for the policies that are adopted, as well as how they are agreed. I fully acknowledge that conclusion. However, more detailed analyses show that this is not the case when we focus only on decision records. It may be that deliberation can and should be held behind closed doors at times. But the specific kind of transparency which is to make legislative decision records public – and include information about individual governments’ positions – may in fact be of general benefit for both policies and representatives: negotiators know that they can trust eachothers’ suggestions and negotiation positions as everyone is aware they can be held accountable for their commitments once the legislation is adopted.

In addition, instead of protracted bargaining to find lowest common-denominator outcomes in a culture of consensus, decision processes may be sped up and given a clearer indication as to where each government stands on an issue. We know from VoteWatch Europe, a transparency organisation in Brussels, that national parliaments certainly have an interest in these developments towards greater transparency in the Council. With Cameron’s demand for a public vote on Juncker, it may be that we now see governments’ own interest in greater transparency increase as well. Ironically, the public vote in the Council will subsequently be followed by a secret ballot in the European Parliament.

Note: This article gives the views of the author, and not the position of EUROPP – European Politics and Policy, nor of the London School of Economics. Feature image credit: European People’s Party (CC-BY-SA-3.0)