Brussels round up: EU unemployment figures, crisis in Iraq, and who should be the next President of the European Council?

Brussels round up: EU unemployment figures, crisis in Iraq, and who should be the next President of the European Council?

EU unemployment figures for May

Eurostat, the statistical office of the European Union, published EU unemployment figures this week. The figures, which indicate the level of unemployment in each EU state in May, show that unemployment across the whole of the EU now stands at 10.3 per cent (down from 10.4 per cent in April), while unemployment in the euro area remained at the same level as in April (11.6 per cent). These figures are a drop from the unemployment rate in May 2013: the EU rate a year ago was 10.9 per cent, while for the euro area the figure was 12 per cent.

Chart: Unemployment figures in EU states in May 2014, seasonally adjusted (%) 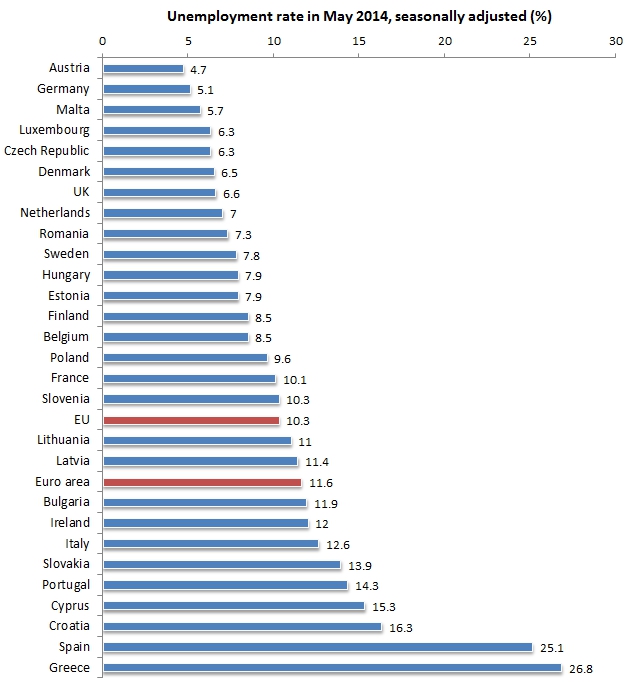 Note: Due to measurement differences, the figures for the UK and Greece are from March, while figures for Estonia and Hungary are from April. Latvia’s figures are from the first quarter of 2014. Source: Eurostat

Crisis in Iraq and Syria

Andrew Hammond at the European Council on Foreign Relations asks how worried Europe should be about the declaration this week of a new ‘caliphate’ by the militant group ISIS. He writes that despite the word caliphate tending to conjure up images of an Islamic empire, ISIS actually has more direct parallels with the Khilafat movement in India which ultimately culminated, indirectly, in the creation of Pakistan.

Julien Barnes-Dacey also assesses whether the conflicts in Iraq and Syria should be regarded as two separate developments or simply one conflict that spans both countries. He writes that while Syria is seen as ‘ground zero’ from a military perspective, Iraq is arguably viewed as being more important given the wider issues in the region such as Saudi Arabia’s concern over Iranian influence in the country.

Next President of the European Council

Following the negotiations over Jean-Claude Juncker’s nomination as President of the European Commission, the focus has now shifted to some of the other key positions in the European Union. The Financial Times’ Brussels blog takes a look at some of the key issues influencing these appointments. The article notes that despite an assumption that Juncker’s nomination would ensure a centre-left candidate would replace Herman Van Rompuy as President of the European Council, this now looks far from certain. Among those who have been touted for the job are Ireland’s Enda Kenny and Estonia’s Andrus Ansip.

Meanwhile, Craig Willy asks whether recent statements by Van Rompuy indicate that he has a more protectionist outlook than has commonly been recognised. He notes that despite the EU’s commitment to eliminating trade barriers, the European Council President has regularly drawn attention to the limits of free trade and the need to protect welfare states.

Note: This article gives the views of the author, and not the position of EUROPP – European Politics and Policy, nor of the London School of Economics. Feature image credit: President of the European Council (CC-BY-SA-NC-ND-3.0)

Brussels blog round up 2 – 8 November: US criticises Germany, Schulz nominated by PES, and could Vitali Klitschko become the next President of Ukraine?