A number of commentators have proposed the creation of a ‘dual mandate’ system whereby national politicians would be appointed to the European Parliament instead of directly elected MEPs. Stuart Brown calculates how this system would alter the composition of the Parliament. He writes that regardless of the precise system used, a reform of this nature would greatly increase representation for the mainstream political groups at the expense of Eurosceptic and populist parties.

Given the almost negligible increase in turnout at the European Parliament elections in May, it is perhaps not surprising that much of the debate which has taken place since has focused on potential reforms to strengthen EU democracy. With just over 43 per cent of voters choosing to go to the ballot box – and in some countries far less than that – the capacity for European elections to genuinely confer legitimacy on the EU’s legislative process has come under intense scrutiny.

One of the most popular responses in this context has been to advocate, as Anand Menon argues, that the European Union should seek to enhance its democratic credentials by forging a stronger link with representatives at the level of national politics. The argument here is in essence that as national elections generally enjoy higher turnout figures and greater political engagement among voters, giving national parliaments a more direct role in the EU’s policy process would enhance the EU’s legitimacy.

This principle has led several authors, such as Sir Robert Cooper and Herman Lelieveldt, to propose the adoption of a so called ‘dual mandate’ system. This would essentially involve appointing national politicians to take up part-time roles in Brussels/Strasbourg rather than directly elected MEPs, much in the same way that national government ministers split time between domestic politics and the Council of the European Union, with the overall number of dual mandate MEPs reflecting the composition of national parliaments. However, leaving aside the arguments for and against this proposal, how would such a system actually affect the composition of the Parliament as it stands today?

The impact of a dual mandate system on the European Parliament

The answer to this question depends to some extent on the procedure used. Most of the proposals which have been made thus far are lacking in specific details, but regardless of the precise system adopted it would have to reflect on some level either the share of the votes received by parties in national elections or (more likely) the number of seats they hold in their national parliament. Within these two approaches there are of course countless variations in terms of the actual system which could be employed – we could split countries into different regions, apply electoral thresholds, or use a variety of different methods for allocating seats.

Nevertheless, a general picture can be provided by calculating seat distributions as if a single method were used across every state. Chart 1 below shows how the number of MEPs in each of the political groups in the Parliament would change if they were appointed in relation to the share of the votes or the number of seats received at the most recent national parliamentary election (assigned using a modified version of the D’Hondt method, taking into account particular rules over representation for minority populations/regions). The Chart contains two estimates: one reflecting the vote share at the most recent national election and one reflecting the number of seats held in the national parliament. 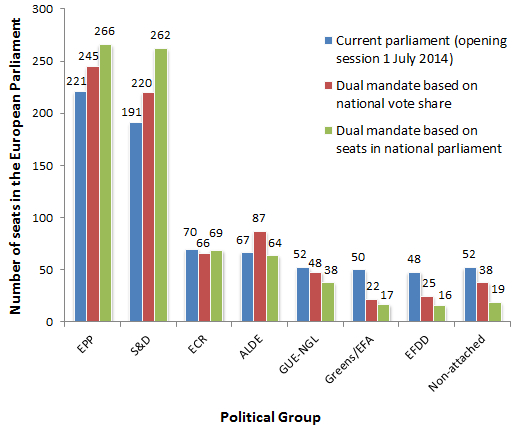 Note: There are 751 MEPs in total. An overview of what each of the political groups stand for is available here, but in general terms the Parliament consists of four ‘mainstream’ groups in the shape of the EPP, S&D, ALDE and the Greens/EFA, with a left-wing group, GUE-NGL, the ECR group which includes David Cameron’s Conservative Party, the EFDD group including Beppe Grillo’s Five Star Movement and UKIP, and a number of unaligned members who are not currently part of any group. Full calculations/data used to compile this chart are available from the author.

While these estimates could change to some extent depending on the exact method used to appoint representatives in each state, the most obvious effect of using such a system would be to boost the number of MEPs in the two largest groups: those of the European People’s Party (EPP) and the Progressive Alliance of Socialists and Democrats (S&D). This gain would largely be at the expense of the green and regionalist parties in the Greens/EFA group, the Eurosceptic parties in Nigel Farage and Beppe Grillo’s Europe of Freedom and Direct Democracy (EFDD) group, and parties not belonging to any political group, such as Marine Le Pen’s Front National.

The European Parliament elections in May produced an unprecedented number of Eurosceptic and populist representatives, most of which are either members of the EFDD or are not attached to any group. While in the current parliament there are 100 of these MEPs, under a dual mandate system based on the number of seats held in national parliaments this would be reduced to only 35. Given that the level of Eurosceptic/populist support in the 2014 elections was exceptional in many respects, it could be expected that using a dual mandate system on this basis would almost completely marginalise Eurosceptic opposition within the European Parliament under normal circumstances.

Adopting such a system would not only affect the balance of power in the European Parliament itself, however, it would also have an impact on the presence of individual parties at the level of national politics. Chart 2 illustrates this effect by showing the five biggest ‘winners’ from a seat-based dual mandate system in terms of overall numbers of seats gained in the Parliament.

Chart 2: Five biggest ‘winners’ if seats in the European Parliament reflected the composition of national parliaments 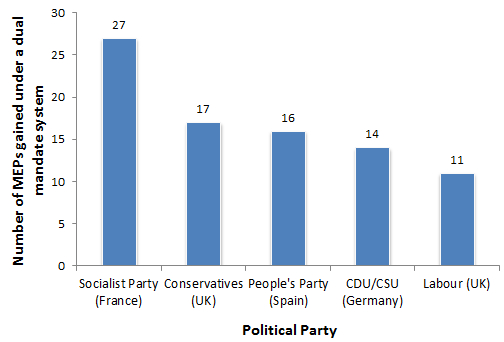 Note: Figures shown are for a dual mandate system based on the number of seats held by parties in their national parliament.

In contrast, this system would penalise smaller parties in particular, so there are fewer big ‘losers’ in terms of overall seats lost in the European Parliament, with losses generally distributed across a large number of parties. Nevertheless, there would be two parties in particular who would suffer from the European Parliament reflecting the composition of national parliaments: UKIP and the Front National. Chart 3 shows the number of seats which would be lost by five selected parties.

Chart 3: Selected ‘losers’ if seats in the European Parliament reflected the composition of national parliaments 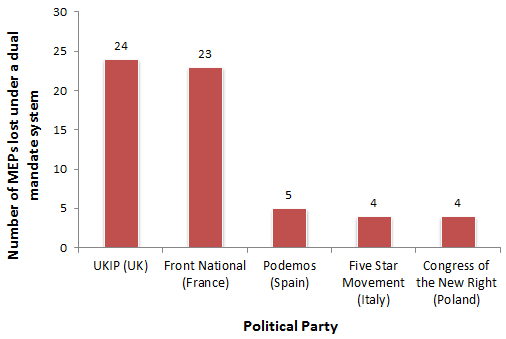 Note: UKIP and the Front National would lose the largest numbers of seats under this system, however alongside the Five Star Movement and the Congress of the New Right there are a number of other parties who would also lose at least four seats. The parties in the Chart are shown for illustrative purposes.

Clearly, some of this is reflective of political changes which have occurred in the period since states last held parliamentary elections. The Socialist Party in France, for instance, has been in government since 2012, however the party’s disappointing polling ratings would suggest that if an election were held today it would receive far less support than it did in the last national election – as occurred in the European Parliament elections in May and the French municipal elections in March this year. The dual mandate system only appears to reward the party in this case because the last election was held during a period when it was more popular with the electorate.

In other cases, however, the system itself would actively penalise or reward certain parties. The Front National is notable as a party that is all but excluded from the French National Assembly despite its tendency to receive relatively large shares of the popular vote. The nuances of the French electoral system make it exceptionally difficult for the party to gain significant representation and this disadvantage would naturally translate into the European Parliament if MEPs were appointed based on their presence in the national legislature. UKIP would be at a similar disadvantage due to the UK’s first-past-the-post electoral system.

Ultimately, although the dual mandate system has been put forward solely as a mechanism for enhancing the EU’s overall legitimacy, it would also have a substantive effect on the number of MEPs held by each political group and national party. While there is a legitimate debate to be had over the most democratic method of representing citizens’ views in the EU’s legislative process, the effect on individual parties would be no less important. As with most democratic proposals, it is perhaps unrealistic to expect that political decision-makers would prioritise normative principles over the potential for a reform to reward some parties at the expense of others.

Stuart Brown – LSE Public Policy Group
Stuart Brown is a Researcher in the LSE’s Public Policy Group and Managing Editor of the EUROPP blog. Before joining LSE he completed his PhD at the University of Strathclyde. His research interests include economic integration, regulatory processes and EU decision-making.