One of the arguments frequently made against the euro is that the Eurozone represents a ‘non-optimal’ currency area. This derives from the notion that the variations between regions within the Eurozone are simply too large for them to share a single currency without encountering problems. Waltraud Schelkle assesses this argument by comparing the experience of the Eurozone with that of the UK during the financial crisis. She argues that the criticisms levelled at the Eurozone are equally applicable to the UK and that if diverse regions are a reason to break up the Eurozone, then the same conclusion would also have to be drawn about Britain’s currency union.

The great British public has at least one certainty: however bad the UK’s recent recession was, the Eurozone is doing worse. And not only UKIP supporters believe that this is the case: the consensus across the UK being that the euro is the joint currency of a motley assortment of countries that do not really fit together while there is enough similarity between the nations that make up the United Kingdom: England, Northern Ireland, Scotland and Wales. I have heard a former permanent secretary say on a panel at LSE earlier this year that there is just nothing that the UK economy can learn from the Eurozone but that the Eurozone in turn is probably doomed because it lacks ‘the glue’ that holds together the British currency union. There were a few Scottish visitors in the audience who couldn’t suppress an incredulous giggle.

But let’s concede that the Scots at least get the referendum that the Catalans would like to have and explore the economic case. As even general newspaper readers may know by now: “the Euro area is not an optimal currency area!” You get over 2,500 results if you put this phrase into Google and another 1,780 if you replace ‘optimal’ by ‘optimum’. Shock horror. But how worried should those poor creatures forced to use the euro – that is, the majority of continental Europeans – be about this verdict? Well, not more than the Brits who are forced to use the pound sterling.

According to the theory, an optimal currency area should be made up of regions that are not too specialised in certain activities like mining or financial services, but have both (and many other activities). This is because if they are too specialised, a shock to the economy will hit these regions very differently. Think of a shock like political turmoil in a country that buys a lot of the mining products or a sub-prime mortgage crisis in a country to which regional banks are exposed. Since they do not have an exchange rate between them by which the adversely affected could devalue and thus make its products cheaper, the region will experience recession. Monetary policy is useless as it cannot lower the interest rate for the badly hit region and leave it for the others. It then depends on the flexibility of labour (and product) markets how badly this recession will spill over into unemployment or just a job turnover and/or lower real wages.

So let’s start with the recession. The UK had the advantage, in contrast to Eurozone members, to devalue with respect to the rest of the world if not between its nations. And it did: on 27 December, 2008, the Pound Sterling traded almost on a par with the euro, £1 costing less than €1.04, down from over €1.52 on 21 January 2007 (source: XE currency charts). It didn’t help that much, except for short-lived hopes that the weakness of the currency could provide new hopes for export-oriented manufacturing in the North of England.

The following map from Eurostat’s Regional Yearbook 2013 shows that Britain was among the worst hit in the recent crisis. Its drop in GDP compared to the EU-27 average makes its performance resemble that of the Southern periphery more than the Northern and Central European core. So much for the wonderful adjustment mechanism that is the exchange rate. The drop was also not uniform: there was Northern Scotland and parts of Wales that were much less harmed than the rest, presumably because they did not take part in the overheating before. Moreover, the particularly hard-hit (deep purple) regions in the North and South-East of England tanked for quite different reasons: Northern England has deprived industrial areas while the South-East is at the heart of the boom-bust service economy.

Figure 1: Change in GDP per inhabitant in purchasing power standard, by NUTS 2 regions, 2008-2010 (click to enlarge) 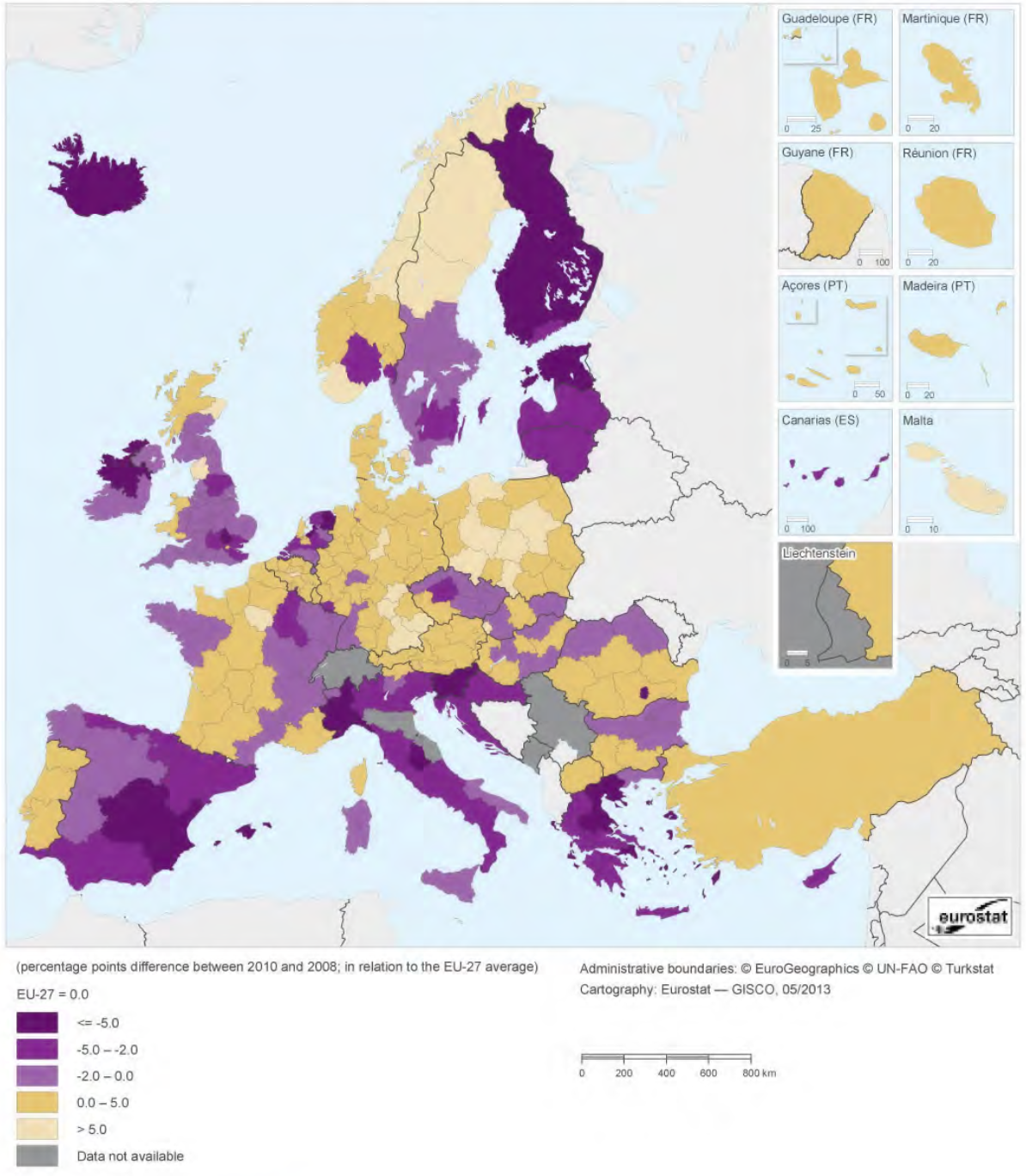 Note: The figure shows how GDP per inhabitant changed in NUTS 2 regions across Europe between 2008 and 2010, with the deep purple regions experiencing the largest drop. The figures represent the percentage points difference between 2010 and 2008, in relation to the EU-27 average. Reproduced from Eurostat Regional Yearbook 2013 (Map 1.3)

These stark regional differences can be seen in Figure 2. Nowhere in Europe is regional inequality of purchasing power as crass as in the UK. In fact, if the present Eurozone were treated as one economy, it would show hardly more disparity than the Poundzone. More precisely, it depends on the measure we use. The ratio of purchasing power between the Eurozone’s poorest and richest NUTS 2 region is 1: 5.4 (Východné Slovensko with 49 per cent and Luxembourg with 266 per cent of the EU27-average, respectively). Compare this to 1: 4.7 in the UK (West Wales and The Valleys with 70 per cent of the EU-27 average and Inner London with 328 per cent). So according to the multiple of regional purchasing power, the Eurozone has more inequality. But if we take the difference in purchasing power between the poorest and the richest region, the UK is more unequal: for these same regions, the difference is 217 per cent in the European monetary union and 258 per cent in the British monetary union (100 per cent is the EU-27 average). 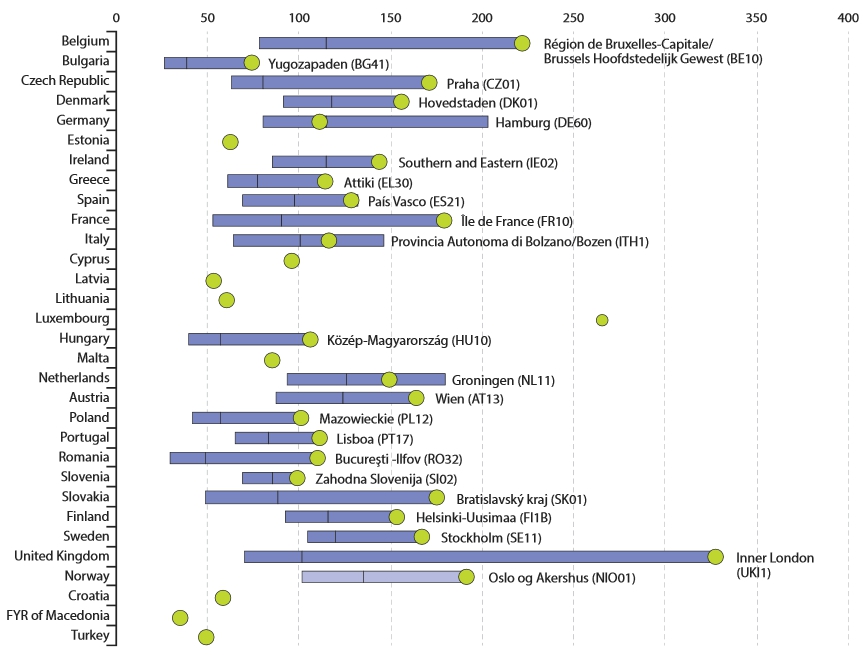 Note: The figure shows the range of the highest to lowest region for each country; the black vertical line is the average (mean); the green circular marker is the capital city (for those countries where there is no regional breakdown, the national average is used as the value for the capital region); the name of the region with the highest value is also included. Source: Eurostat Regional Yearbook 2013 (Fig.1.2)

These income discrepancies (measured in purchasing power standards) persist even though the UK has a relatively low dispersion of unemployment rates compared to the large and wealthier member states, as shown in Figure 3. What is also noticeable is that the dispersion of unemployment rates within the EU-27 is not larger than that within Belgium and now Italy. Those concerned with the sub-optimality of the Eurozone as a currency area must also be in favour of dissolving Belgium and Italy (with Germany in 2008 a close enough candidate). The reason is, of course, that high unemployment in a country is the average of its regions and is typically not evenly spread but regionally concentrated. We also see why unemployment in Spain is so worrying: its high national average is relatively evenly spread and has become even more evenly spread across all regions by 2011. 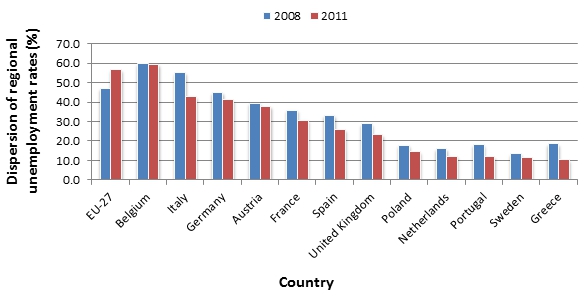 Note: Dispersion here is measured in terms of the coefficient of variation which is the regional variation in percentage terms around the average of the respective country. Source: Eurostat Regional Yearbook 2013 (selection from Figure 5.3)

What are the lessons of the Eurozone for the UK, to paraphrase the title of an important article by Paul Krugman, published in 1993? First of all, the UK has a North-South divide in terms of economic structure that is profound. In fact, the sectorial specialisation which is a regional specialisation has become stronger in the course of this recession: “although the service economy is now just under 3 per cent bigger than it was at the peak, manufacturing is still more than 7 per cent smaller, and the production industries as a whole have been diminished by 11 per cent.” This is not at all surprising. Krugman explained in his article that monetary integration allows regions more risk-taking in the sense of specialisation: they do not have to spread themselves over different currency areas as a kind of hedging against exchange rate changes.

Secondly, flexibility of labour markets will not make a currency union ‘more optimal’. Mobility of the workforce, moving to where the jobs are, would not necessarily lead to less income inequality across the E(M)U; at least it has not done so in the UK. This is because those who migrate tend to be younger and better educated, that is have a higher earnings potential. This benefits the recipient regions but leaves behind a regional economy that becomes older and deprived of its most dynamic workforce. Mobility may therefore accentuate regional inequality, especially when the recipient regions then erect barriers for the family to follow (through policies or markets for shelter). Remittances can attenuate this inequalising process to some extent.

Finally, this is not helped by a one-size-fits-none interest rate policy that is too high for manufacturing industries in the North of England but too low to prevent housing bubbles in the South. Just as in the Eurozone before the crisis. Those who think the Euro area cannot live with a uniform interest rate policy for its diverse regions must consequently support the break-up of the United Kingdom. But one should not stop at separating Scotland from the rest: England is also not an optimal currency area. Stock up on glue if this frightens you. Or beat UKIP with their own arguments.

Note: This article gives the views of the author, and not the position of EUROPP – European Politics and Policy, nor of the London School of Economics. Feature image credit: Images Money (CC-BY-SA-3.0) 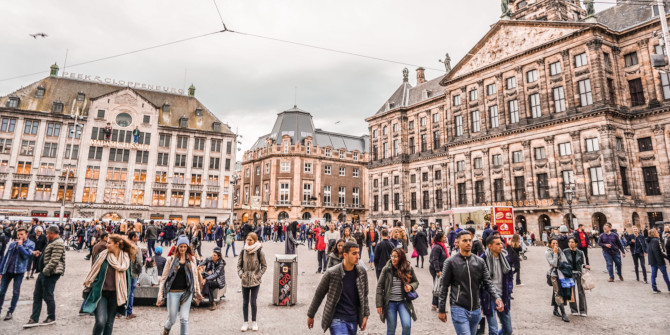 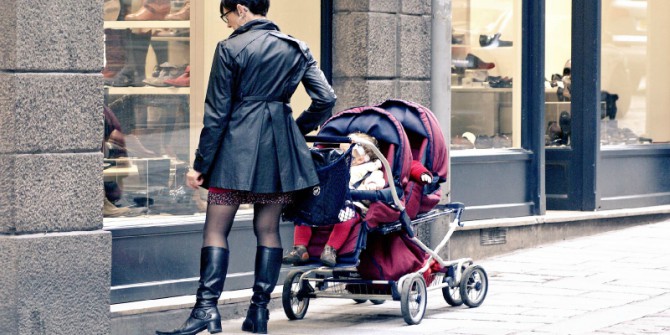