The European Regional Development Fund (ERDF) provides funding for projects aimed at strengthening economic and social cohesion in the European Union. However the extent to which EU countries successfully spend the funding they have been allocated (often referred to as their ‘absorption rate’) varies between different states. Jale Tosun shows that there is a positive relationship between ERDF absorption and government capacity, with new member states that joined the EU in the 2004 enlargement demonstrating higher absorption rates than old member states. Member states with high income levels are also less likely to maximise the absorption of their allocations, while there is also some support for the principle that decentralisation within states has a negative impact on their absorption performance.

The European Regional Development Fund (ERDF) is a powerful instrument used by the European Union (EU) to correct unequal development between regions and to prevent the escalation of existing disparities. For the ERDF to be effective, however, the funding allocated to the member states must be spent, and thus the issue of financial execution has become an important topic in recent debates over the present and future of EU cohesion policy. The European Parliament, for example, states that ‘many Member States have faced difficulties in absorbing the structural and cohesion funds from the EU budget, especially during the early post-accession years’.

In a recent study, I have looked at two elements to this picture in particular. First, I have assessed whether there is a difference between the old and the new member states with regard to ERDF ‘absorption’. Absorption refers to the degree to which states have been able to spend funding from the EU in an effective and efficient way. Second, I have analysed how the cross-country variation in absorption performance can be explained. The theoretical basis for this study comes from two different fields of research: Europeanisation and regional governance. Empirically, the analysis is based on data measuring the ERDF absorption performance of 25 member states at the end of the programming period 2000-06 in the year 2008. The empirical data are analysed both descriptively and by fitting ‘Tobit models’ for cross-sectional data. 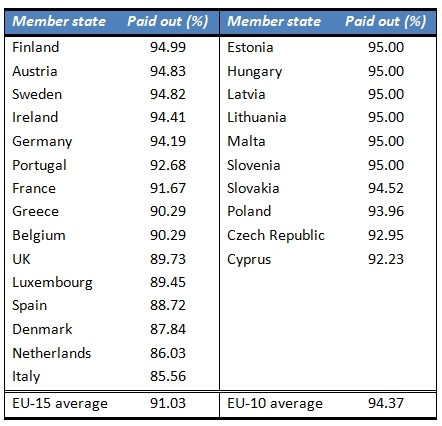 Note: The table shows the percentage of each state’s ERDF funding which each state paid out in 2008 (i.e. their absorption performance).

Studies of regional governance stress the importance of fiscal/political decentralisation, investigating how this process affects economic performance. In terms of regional funds that can mean two things: On the one hand, one could argue that more decentralised polities possess the institutional structures and resources necessary to better absorb structural funds. On the other hand, the need for both horizontal coordination across different subnational entities and vertical coordination with the central government may cause delays in the absorption of funds. This leads to the second hypothesis: ERDF absorption may improve/worsen with political/fiscal decentralization.

Finally, ERDF absorption performance may be explained by the member states’ financial absorption capacity. The ability to co-finance the programmes and projects supported by the EU is a requirement for the absorption of structural funds. Therefore, it is important to measure the influence of the member states’ overall financial absorption capacity in terms of its Gross Domestic Product. Likewise, an economic crisis should worsen a state’s capabilities to absorb ERDF.

To test the hypothesis, I have fitted two-limit Tobit models in order to take into account the restrictions in the dependent variable’s range. The estimation findings show that government capacity is positively correlated with ERDF absorption performance. New member states are significantly more likely to absorb higher shares of ERDF. This finding is in line with Ulrich Sedelmeier’s argument that not only have the new member states invested in administrative and government capacity, but they may also be affected by the experience of pre-accession conditionality and thus be more susceptible to ‘shaming’, which induces them to greater compliance with EU requirements in comparison to the old member states. On the other hand, the findings show that member states with higher income levels are less likely to maximise absorption. This result also contradicts the European Parliament’s judgement that the ability to co-finance projects is relevant for absorption performance – at least when member states’ performance is analysed at the end of the programming period.

Although the overall empirical support is weak with regard to political decentralisation, there is some support for a theoretical argument predicting the negative impact of fiscal decentralisation on government performance. But this finding is less robust across the different model specifications than the other results. In none of the models did the variable employed to test whether the economic crisis had an impact on ERDF absorption produce significant coefficients. Thus, the negative impact of economic crisis could not be verified.

While this study has provided some new theoretical and empirical insights, it also suffers from a number of limitations. Most importantly, this study used only one indicator to test the impact of government capacity. Re-running the models using a range of different measurements of government capacity would increase the confidence in the findings. Another obvious limitation is the exclusion of Bulgaria and Romania. Finally, the research concentrated only on the absorption of ERDF funds, neglecting to address the quality of the projects funded. It is possible that the rapid absorption of the allocated funding by Central and Eastern European states could have had a detrimental effect on the quality of their projects. Building on this, one might further investigate whether the speed of financial absorption affects the quality of a member state’s projects.

To read the full study, see the author’s recent article in the Journal of Common Market Studies

Note: This article gives the views of the author, and not the position of EUROPP – European Politics and Policy, nor of the London School of Economics. Feature image credit: Elliott Brown (CC-BY-SA-3.0)