Following months of discussions, a special meeting of the European Council on 30 August appointed Donald Tusk as the next President of the European Council and Federica Mogherini as the EU’s next High Representative for Foreign Affairs and Security Policy. Writing on Tusk’s appointment, Patryk Szambelan at European Public Affairs calls the Polish Prime Minister a ‘charismatic mediator’. He also notes that from Tusk’s perspective, the appointment will coincide perfectly with the Polish electoral calendar – enabling him to bow out shortly before next year’s Polish parliamentary elections, but potentially allowing him to return in time to run in the 2020 Polish presidential elections.

Meanwhile Charlemagne’s notebook assesses both appointments, writing that Tusk is likely to adopt a significant change of approach from Herman Van Rompuy. The outgoing President was noted for his ability to facilitate consensus among EU states, but Tusk might be expected to bring more clout to the position given his recent experience as leader of the Polish government.

The European Central Bank generated headlines on 4 September by opting to cut its benchmark interest rate to 0.05 per cent. Open Europe has a round up of reactions from the media across Europe. Stephanie Flanders, the former economics editor at the BBC, also argues that this could be the first step toward the ECB adopting full-scale quantitative easing, stating that “I have always felt that the bar to full-blown quantitative easing by the ECB was extremely high, but listening to Draghi’s comments about the latest trends in the real economy and, especially, the inflation data, it is hard to avoid the conclusion that they are heading quite fast in that direction.”

A NATO summit is being held in Wales this week, with the issue of Ukraine and Russia dominating the proceedings. Jan Techau at Strategic Europe writes that while the presence of Ukraine’s President, Petro Poroshenko, at the summit suggests NATO is ready to guarantee the country’s security, this is only true in a largely ‘symbolic sense’ and that the only obstacle to regions in eastern Ukraine seceding to Russia is an economic one brought about through sanctions.

Elsewhere, Peter Spiegel at the Financial Times’ Brussels Blog assesses the content of the latest round of sanctions expected to be implemented by the EU against Russia. The article suggests that new sanctions will be announced by the end of the week, but there is still a lack of consensus over what they should involve. 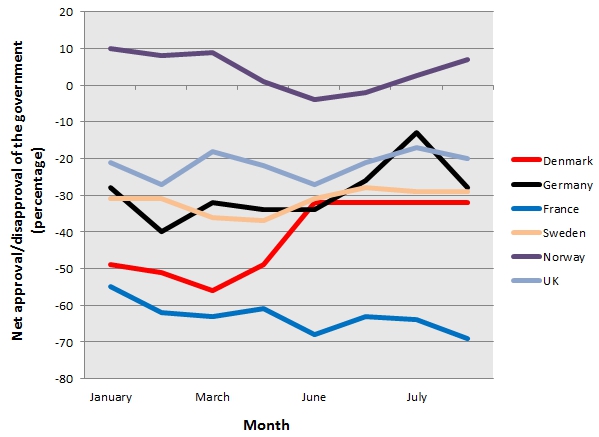 Note: Finland is also part of this series but is not contained in the chart.

Note: This article gives the views of the author, and not the position of EUROPP – European Politics and Policy, nor of the London School of Economics. Feature image credit: European External Action Service (CC-BY-SA-ND-NC-3.0)

Posted In: 2014 European Parliament elections | Brussels Blog Round up