The Syrian town of Kobane has been under siege from Islamic State (IS) forces since September. Given that Kobane is located on the Turkish border, one of the key debates in the conflict has been over potential Turkish involvement, with the country so far holding back from providing any substantial support to the Kurdish forces defending the town. Marianna Charountaki writes that while in recent days there have been some concessions from Turkey, such as allowing Iraqi-Kurdish forces to cross the border into Syria, the country’s reluctance to become directly involved reflects its competing interests within the region.

The current situation in the Middle East has given prominence to a chaotic pattern of alliances, as well as to the creation of a new phenomenon in the region: Islamic State, formerly known as the Islamic State of Iraq and the Levant (IS). The rise of IS is closely connected to an attempt to defeat – and to some extent exterminate – Kurdish inhabited areas in Syria. It is also connected to the existence of a strong Iran, given US Secretary of State John Kerry’s own remarks that Iran could act as a bridge to Damascus within an international coalition against IS.

Turkey’s foreign policy against this backdrop, particularly its reluctance to become deeply involved in the belated international coalition against IS, has generated international media attention – most notably over the country’s refusal to provide direct military support to Kurdish forces in the Syrian town of Kobane. Why has Turkey been so reluctant to become involved? There are at least three explanations.

First, Turkey’s inaction could be seen as a reflection of Ankara’s fear of retaliation from IS, as an immediate neighbouring and bordering state: an assertion made by Recep Tayip Erdoğan, the Turkish President, himself, despite criticism by the opposition that the statement was merely a smokescreen. Second, one could cite Ankara’s lower levels of power in comparison to Bashar Al Assad’s ability to preserve his hold over Syria until this point. A third explanation would relate directly to the debate over the identity of IS and its source of support.

Ordinarily, Turkey might be expected to support the Sunni segment of the Middle East’s political setting, outside of Sunni terrorist groups such as those associated with IS. It is therefore interesting that the main target of IS has been the Kurds, who have suffered severe attacks, alongside other Sunni elements. The main perceived threat for Turkey remains the Kurdish movement’s empowerment, an intrinsic part of which is the Kurdistan Workers’ Party (PKK). The PKK fought an armed struggle against the Turkish government for almost three decades and has dominated Turkey’s domestic and foreign policy agenda throughout this period.

Three self-declared ‘autonomous cantons’ have emerged in Syrian Kurdistan during the Syrian civil war. These are Jazira (declared on 21 January 2014), Afrin (declared on 29 January 2014), and Kobane (declared on 27 January 2014). The rise of these cantons has been seen by Turkey, in addition to the other problems raised by the conflict, as a direct threat to the stability of Turkish foreign policy, especially after the unsuccessful ‘zero problems with our neighbours’ approach which the country had previously articulated.

In understanding Turkey’s reluctance to get involved in Kobane, and in view of the problems Turkish foreign policy currently faces, this context cannot be ignored. The reforms pushed for by Erdoğan since 2011 have exacerbated the situation in Syrian Kurdistan. At any rate, Ankara would do well to consider its own Kurdish population at a time when a powerful PKKalong with so called ‘People’s Protection Units’ (commonly known as the YPG and founded by the Syrian-Kurdish Democratic Union Party) have contributed greatly to saving several key settlements, including Sinjar, Rabia, Makhmur and Jazaa.

Moreover, a peace process is still on-going within Turkey’s domestic sphere and the Kurdistan Regional Government (which controls Iraqi Kurdistan) has officially recognised the autonomous cantons in Syria, which could bring about unity within the Kurdish movement as a whole. The last straw in this sense has been the recent American-backed policy of arming the Kurds in Kobane. Turkey’s neighbours also appear to be distancing themselves from the country’s Kurdish policies, most notably Iraq’s Prime Minister Haider al-Abadi.

Against this backdrop, Turkey’s refusal to become deeply involved in the crisis in Syria – which is arguably a product of its own making, given the country initiated attempts to topple Assad – can only be viewed as indecisive. Turkey is presently engulfed by confusion in its efforts to confront the new dilemmas which have arisen. The country’s conditional participation in the war against IS appears unable to reverse the trajectory of the Kurdish issue in the Middle East and Ankara’s current policies imply only one possible conclusion: the creation of a de facto second state within Syria. Ironically, Turkey’s own foreign policies – first toward Iraq under former Prime Minister and President, Turgut Özal, and today in Syria – have facilitated the consolidation of the Kurdish status. It has acted out of fear of a new safe haven developing in Syria, a second refugee crisis and the fostering of the Syrian opposition which was organised so offhandedly.

Unless Ankara compromises over the situation in Syria and in its own domestic sphere, in the same way as it has done in Iraq, Turkey’s position will grow ever more precarious. Turkey has begun to change its position, in view of the weight and pressure that the United States and the international community have exerted in their support for the Kurds. The country has allowed the arming of Kurdish forces and, most recently, permitted Iraqi Kurdish fighters to cross into Syria. However outside of these limited concessions, the Turkish abstention from the international coalition against IS will not reverse the growing Kurdish role in the region – the only likely outcome is that it may delay this for a while.

The approach will also undoubtedly prove damaging for Turkey’s own position within the EU and in light of Erdoğan’s aim of establishing Turkey as a leading player in regional politics. The aim for Turkish foreign policy should be to win influence based on cooperation rather than exclusion, including potentially siding with the Kurds. This is the only real route to regional power, as the actors who come out strongest will be those who target the best alliances.

This would not strictly clash with Turkey’s vision for supremacy within the region and the new role the country presumes to play in the reshaping of the Middle East. Turkey is surrounded by Kurds and unless the Kurdish issue is resolved Ankara cannot make any substantial progress in the Middle East. In this sense, the role of the PKK should not be underestimated as a key non-state actor, both in the unification of the Kurdish movement and the balancing of Turkish politics.

Note: This article gives the views of the author, and not the position of EUROPP – European Politics and Policy, nor of the London School of Economics. Featured image credit: World Economic Forum (CC-BY-SA-3.0) 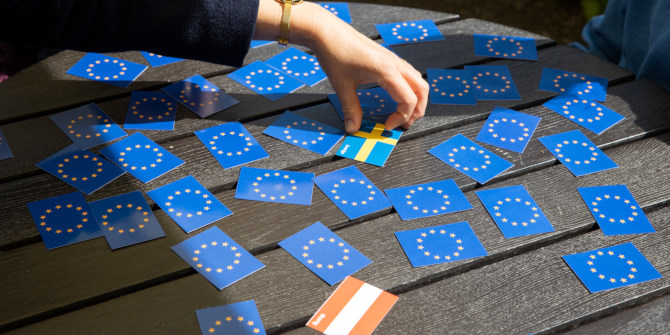