How important are wider economic conditions in determining election turnout in advanced industrial democracies? Troy Cruickshank argues that the degree of economic optimism within a country may have an important impact on whether people choose to vote. Using European Election Studies (EES) data, he notes that this effect was apparent in the 2005 and 2010 UK general elections, with those holding a more negative outlook on the economy also indicating that they had less intention of taking part in the election.

Can changes in voting behaviour be explained by the prevailing economic conditions within a country? The received wisdom is that it can. Bill Clinton staked his 1992 election campaign on the question, and his campaign mantra of “It’s the economy, stupid” is still well remembered today. That some voters will desert a government that presides over economic decline is accepted by politicians and political scientists alike. It is much less clear whether, and how, turnout is affected by economic conditions. There is an ongoing academic debate as to whether economic crises mobilise people to vote, so as to punish the government for allowing it to happen, or whether crises cause them to withdraw from a political process that has not met their expectations.

The United Kingdom, like many mature democracies, has been experiencing a long-term decline in turnout. As the chart below shows, turnout at the last general election in 2010 was only 65.1 per cent, far less than the greater than 80 per cent figures recorded at elections in the early 1950s. Even this figure is in fact an improvement upon the 2001 and 2005 elections, which recorded turnouts of 59.4 per cent and 61.4 per cent respectively. Could this increase in turnout be related to the severe recession that first hit the UK and most of Europe in late 2008? 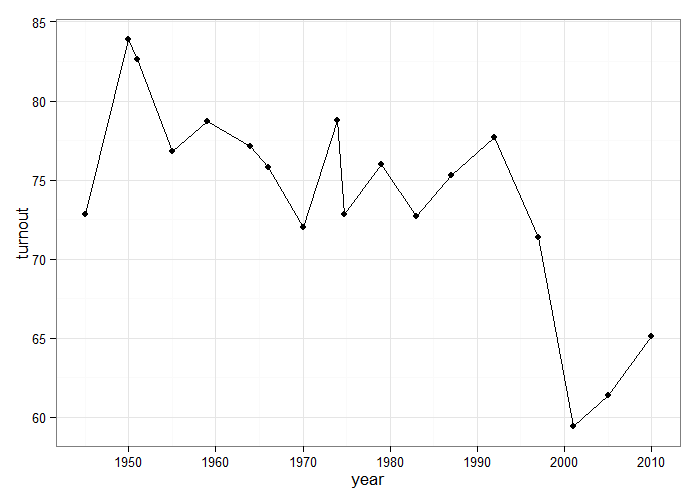 In order to answer this question, I compared the 2005 and 2010 elections using the survey data published by the European Election Studies (EES). As these surveys were conducted in July 2004 and 2009, the timing of both is approximately a year before the corresponding British general election. One of the questions respondents were asked to answer is who they planned to vote for at the following general election. Many of the people surveyed responded that they did not intend to vote at all, offering an opportunity to assess the factors that might cause someone to be disinclined to cast a vote.

The EES surveys include two questions about economic perceptions. One asks how respondents feel the economy has changed over the past twelve months and one asks how they expect it to change over the following twelve months. The problem with the retrospective question is that in 2009 there was a clear consensus on the question. A majority of British respondents agreed that the economy had become much worse than it was a year prior, although they remained divided on what would happen in the future. My study thus sought to find out whether there was a link between future expectations about the economy and turnout intention.

Comparing the intention to vote with the prospective economic perceptions of respondents showed similar patterns in both years. In general, the more optimistic a person was about the future of the economy, the more likely it was that that person was intending to vote, even when controlling for age, sex, education, occupation and urban density. According to these results, an individual who believed the economy would improve somewhat was approximately eight per cent more likely to vote than a similar individual who believed it would remain the same.

This could explain the increase in turnout between the 2005 and 2010 elections. Although respondents in the second survey agreed that the economy had deteriorated over the last year, they were much more optimistic about the future direction of the economy than respondents in the first wave. Since a given level of optimism had the same positive effect in turnout intention in both waves, the spike in turnout at the 2010 election seems to be at least in part a response to that.

On the other hand, respondents in the second survey were less likely to vote overall, irrespective of their level of optimism or demographics. Thus, although turnout seems to have been boosted by expectations of improved economic conditions, it was also dampened by something else. One explanation for this could be that people were made somewhat disinclined to vote by the occurrence of the recession in the first place. This decline in turnout intention between the two surveys was not limited to the UK and was actually a trend across the European Union. Although this gives some support to this explanation, the UK’s upcoming general election in May will provide an opportunity to test this further.

Returning to the original question, it seems that economic conditions do indeed have an effect on intention to vote. In particular, the more optimistic people are about future economic conditions, the more likely they are to vote. It may be the case that the recession caused other voters to become discouraged and to withdraw from the electoral process, limiting the spike somewhat, although this is not certain. With the next election still several months away, much could change, but the current economic figures could be good news for the turnout.

Note: This article originally appeared at Democratic Audit and gives the views of the author, and not the position of EUROPP – European Politics and Policy, nor of the London School of Economics. Featured image credit: Mark Seton (CC-BY-SA-3.0)