On 26 October, Ukraine held parliamentary elections. The elections were not held in contested parts of the country, however, and rival polls were held on 2 November in Donetsk and Luhansk. Max Bader writes that while the composition of the new Ukrainian parliament is now more pro-European than ever, the on-going conflict in eastern regions ensures the country’s future will remain deeply uncertain.

After the Euromaidan revolution in February of this year, there were immediate calls to hold new parliamentary elections, in addition to a presidential election, in order to replace the legislature that had been elected in 2012. The 2012 legislature had become especially discredited because, at the height of the revolution, it voted in favour of a package of reforms which, if implemented, had the potential to turn Ukraine into an outright dictatorship. Because a number of MPs changed political allegiances, the ‘old’ legislature has been able to adopt a number of important laws since the revolution, including on European integration, the Anti-Terrorist Operation in the East, the lustration of discredited officials, and anti-corruption policies.

After two political parties withdrew their support for the ruling coalition in July, newly elected president Poroshenko was finally able to call a new election. The 26 October election was held under a parallel mixed electoral system, according to which 225 MPs were elected from closed nation-wide party lists, and the remaining 225 in single-member districts. Of the six parties elected to the new parliament through the proportional section of the ballot, five are, at least in their declarations, squarely in favour of comprehensive reform and of European integration.

The Opposition Bloc, which came in fourth with 9 per cent of the vote, is the only party that represents forces from the Yanukovych regime and that advocates reconciliation with Russia. Four of the five pro-European parties, as well as the Opposition Bloc, are new political formations. Only the Fatherland party of former prime minister Yulia Tymoshenko, which narrowly crossed the five per cent threshold, has competed in previous elections. The new composition of Ukraine’s parliament, the Verkhovna Rada, altogether contains many old faces, but also many newcomers to the political scene, including prominent journalists and Euromaidan activists. The Table below shows the full results.

Table: Results of the 2014 parliamentary election in Ukraine 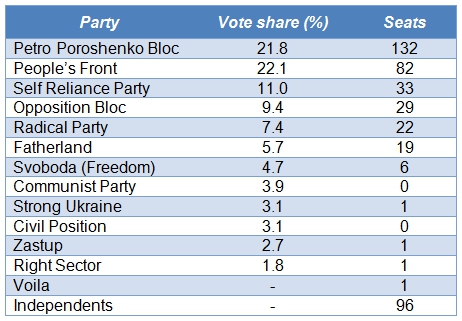 Note: Half of the 450 members of parliament are elected using proportional representation on nation-wide lists, while the other half are elected in single-member constituencies. The Table shows the vote share in the national vote – where parties had to pass a 5 per cent threshold to be allocated seats. The Table also shows the total seats for each party from the national and constituency elections for seats which have been declared, however many of those elected from constituencies will later join party factions (i.e. some of the independents shown in the Table). Results are based on the Central Election Commission’s latest figures – the 27 seats within contested parts of the country will be left vacant. Figures are rounded to one decimal place. For more information on the parties see: Petro Poroshenko Bloc, People’s Front, Self Reliance Party, Opposition Bloc, Radical Party, All-Ukrainian Union “Fatherland”, Svoboda (Freedom), Communist Party, Strong Ukraine, Civil Position, Zastup, Right Sector, Volia.

The election results suggest a remarkable shift in Ukraine’s political landscape. For the first time, pro-European forces are unequivocally dominant. The two biggest parties are those of president Poroshenko (Petro Poroshenko Bloc) and of prime minister Arseniy Yatsenyuk (People’s Front). These two parties will control slightly more than half of seats in the Verkhovna Rada, and are poised to form a coalition, whether or not with other parties added.

A look at the electoral map shows that the Opposition Bloc has still been able to win the proportional section of the vote in a number of regions in the East. While previously, however, Yanukovych’s Party of Regions managed to win an overwhelming majority in these regions, the five pro-European parties together now received more votes than the Opposition Bloc.

The explicitly nationalist parties fared poorly in the election despite the powerful patriotic sentiments that have been evoked by the Russian annexation of Crimea and the Russian-backed separatist struggle in the East. The Svoboda (Freedom) party, which won ten per cent of the proportional vote in the 2012 elections, failed to cross the threshold by a small margin this time around. And the Right Sector party, whose activists were among some of the most hardline Euromaidan protestors, and which is considered by some as proto-fascist, ended in twelfth position, with less than two per cent of the vote.

In previous elections, there was a clear electoral divide between several regions in the western and central areas of the country on the one hand, and several regions in the eastern and southern parts of the country on the other hand (with some regions in between). Both in this parliamentary election and in the May 2014 presidential election, in which Poroshenko won a plurality of the vote in almost every district of the country, the electoral divide has been much less sharp. Another positive aspect about the election is that it was exceptionally well assessed by the Organization for Security and Co-operation in Europe (OSCE), the foremost organisation that monitored the election. Among the roughly 4,000 polling stations across the country where voting procedures were observed, only one per cent were considered flawed by observers.

The elections, however, were also problematic in several respects. First, and most obviously, voting was not conducted in areas that are within the legal borders of Ukraine, but that are currently not controlled by the central authorities, in particular Crimea, and some of the most populated parts of the Donetsk and Luhansk regions. The 27 seats assigned to the single-member districts of these areas will remain vacant.

Second, turnout in the election, at 52 per cent, is surprisingly low at first glance. One likely reason for this is that the campaign was short and relatively timid. Political parties and candidates were generally hesitant to stage big campaigns while the conflict in the separatist-held areas rages on. A second reason for the low turnout is that the pro-European parties which now dominate the legislature were highly similar in their programmatic messages. The parties, some of which were created only over the summer, were in fact associated first and foremost with their leaders, rather than with programmatic positions. A final reason for the low turnout is that, taken together, the outcome of the election was predetermined: while the 2012 election was heavily contested between forces that were loyal and opposed, respectively, to the Yanukovych administration, it was clear from the beginning that the October 26 election would be swept by forces that came to power following the revolution.

Even more so than the revolution, the conflict in the East has brought Ukrainians closer together. This is evidenced, among other things, by the impressive scale of civil society activity to support the (largely volunteer) troops in the East, and to keep a check on the new authorities. In a sense, the country now knows where it wants to go. The question for the coming months and years is to what extent the Putin regime will seek to further disrupt the pro-European and pro-reform course that Ukrainians have voted for.

Note: This article gives the views of the author, and not the position of EUROPP – European Politics and Policy, nor of the London School of Economics. Featured image: Ukraine flag, Credit: U.S. Army Europe Images (CC-BY-SA-3.0)

Max Bader – Leiden University
Max Bader is Assistant Professor of Russian and Eurasian Studies at Leiden University. He served as a short-term observer during the 2014 parliamentary elections in Ukraine on 26 October.