What incentives are there for non-democratic governments to agree to risk losing power in elections? Based on an analysis of over 3,000 elections which have taken place across the world since 1788, Adam Przeworski writes that the practice of peacefully changing governments via the ballot box has been a relatively rare occurrence in modern history. Nevertheless, he notes that while it is difficult to establish the first peaceful transition of power in a state, once the principle has been implemented it often becomes entrenched over time.

In a democracy incumbent governments risk office in elections and yield it when they lose. Parties offer platforms and personalities, people vote, votes are counted, someone is declared the winner, the winner enters unimpeded the White, Pink, or Blue House, and this sequence of events is repeated at regular intervals. We can take it for granted, so we do.

Yet examining the history of all countries that existed in the world between 1788 and 2008, one is struck by how difficult it is for rulers to place their power at risk in elections, to trust that if they do so their actions would be reciprocated, to feel safe that they can lose office without losing much else – that political conflicts can be processed with limited stakes.

Historical facts are eloquent. As of 2008, sixty-eight countries, including the two elephants, China and Russia, have never experienced a peaceful transfer of power between parties as a result of an election. Moreover, while the first partisan alternation in history occurred, albeit painfully, in the United States as early as in 1801, defeats of incumbents (persons, parties, or designated successors) have been rare until recently and peaceful transfers of power resulting from elections even more so.

Incumbents expose themselves to the possibility of defeat and yield office when they believe that their opponents would do the same if they become the rulers. This belief is easy to sustain when the past incumbent had already yielded office having lost an election. But how is one to know what would happen if one loses an election when nothing of the sort has ever happened before? Will the defeated incumbents survive intact as political contenders with the prospect of some day returning to office, or do they risk death, imprisonment, or exile – personal as well as political annihilation?

When I commented to a Polish communist reformer that if the regime would hold a competitive election it would lose, his response was “what matters is not whether we would win or lose but what we would lose.” This “what” is quintessential. When incumbents fear that an electoral defeat may mean a loss of life, freedom, or even just fortune, their risk is simply too high. Releasing the reins of power is like letting go of the trapeze without knowing whether one would be caught: a matter of belief about someone else’s good faith, of trust.

Put yourself in the shoes of General Pinochet, the Polish Communists in 1989, South African whites in 1994, the Algerian military in 1991, or President Putin today. If you allow elections to be competitive, lose, and yield office, what will the winners do to you? After all, the opposition does not just want to defeat you, but to destroy you: it accuses you of breaking laws, of amassing a fortune; in the case of Putin even of having bombed a Moscow building as a pretext to intensify the Chechen war. The risk is foreboding.

One may think, however, that people learn from experience. The incumbent may fear that the opposition would exact revenge if it is victorious, but the victorious opposition will already have seen that the incumbent did release its hold on power. It may still well be that a party that yielded office once would not do it the next time: individuals involved may not be the same, circumstances may change. Moreover, an entire sequence of elections may occur peacefully, with or without alternations, and then some exogenous event may lead to a coup, usurpation of power by the current incumbent, civil war, or some other constitutional irregularity. Nevertheless, going through alternation once should at least assuage the fears.

If this argument is correct, the first alternation should be difficult and rare but the probability that governments would be selected through elections should increase sharply once one had transpired. And when more alternations occur, future conflicts should be more likely to be processed by elections, rather than by force. This is indeed what the historical patterns indicate. The Chart below shows the outcomes of subsequent elections given the number of past alternations within “electoral spells”, which are periods during which elections of any kind were held regularly without constitutional breakdowns, such as coups, civil wars, or other major constitutional violations. 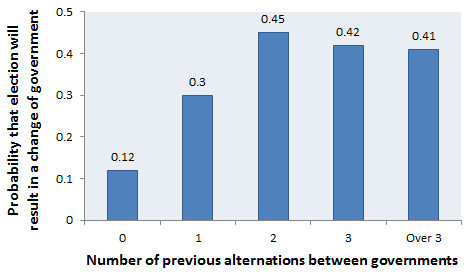 Note: The horizontal axis shows the number of times a country has previously changed government in the ‘electoral spell’, while the vertical axis shows the probability that a given election will result in a change of government (with 0 indicating the least likelihood of a change of government and 1 the highest). The figures are based on an analysis of around 3,000 elections which took place globally since 1788. See the author’s longer journal article for more information.

It is apparent that once an alternation has occurred, the defeat of the next incumbent and the compliance with the election outcome become much more likely. First alternations are rare not only because incumbents are unlikely to lose, but also because they often do not leave office when they do lose. Subsequent alternations are more likely mainly because incumbents are more disposed to expose themselves to competition. Alternations become routine quite quickly: on average it takes 9 elections for the first alternation to occur, but it takes only 3.4 elections for the second and only 2.3 for the third.

Having experienced alternations does not guarantee, however, that the electoral mechanism would continue to function. It is a different question whether an alternation would occur in subsequent elections and whether the electoral mechanism would survive or be interrupted by a constitutional breakdown. The probability that elections would cease to function does decline rapidly, dropping to zero when a spell witnessed more than six past alternations. In Chile in 1924, Costa Rica in 1948, Ecuador in 2000, Germany in 1933, and Thailand in 2000, electoral spells ended after three alternations; in Portugal in 1870, Sri Lanka in 1982, Norway in 1940, and the Philippines in 1972 after four; in Chile in 1973 after five, in Italy in 1922 after six.

One might want to eliminate Italy from this list because alternations were an outcome of an agreement between parties and one might also drop Norway because the constitutional breakdown was accompanied by the German invasion. But if we were to include France in 1940 (the Vichy regime) the threshold would have been nine. Hence, the number of past alternations that makes the electoral mechanism immune to constitutional breakdowns is somewhere between five and nine. Nevertheless, the effect of past alternations on the survival of the electoral mechanism is powerful.

Conflict, liberty, and peace do not coexist easily. When one looks at world history in the perspective of centuries, the practice of peacefully changing governments by having the people freely choose them appears as no more than a speck. Yet competitive elections are a self-institutionalising mechanism: each experience with alternation makes it more likely that the mechanism will be used in the future. The bad news emanating from this analysis is that the first step requires crossing an abyss. The good news is that the habit is addictive.