Austria was one of the few countries in the Eurozone to emerge relatively unscathed from the financial crisis. As part of our on-going series on the economies of Europe, Klaus Weyerstrass assesses how the country’s economy has developed since. He writes that while Austria still ranks highly on GDP per capita (PPP), it has lost ground to comparable countries such as Switzerland and Germany in recent years. He argues that the key to maintaining its current economic position will be to increase spending on research and development, not least to compensate for the negative effect of a shrinking working-age population on economic growth.

Austria has the second highest per capita income (GDP in purchasing power standards) in the European Union. As Chart 1 below shows, only Luxembourg has a higher per-capita income. However, compared to its neighbour Switzerland, which is not in the EU but of similar size and geographical location, Austria has fallen behind in recent years. In 1995, when Austria joined the EU, its purchasing power adjusted GDP per inhabitant was 14 per cent lower than that of Switzerland. By 2013, this gap had widened to 18 per cent.

Chart 1: Per capita GDP in the EU, US and Switzerland 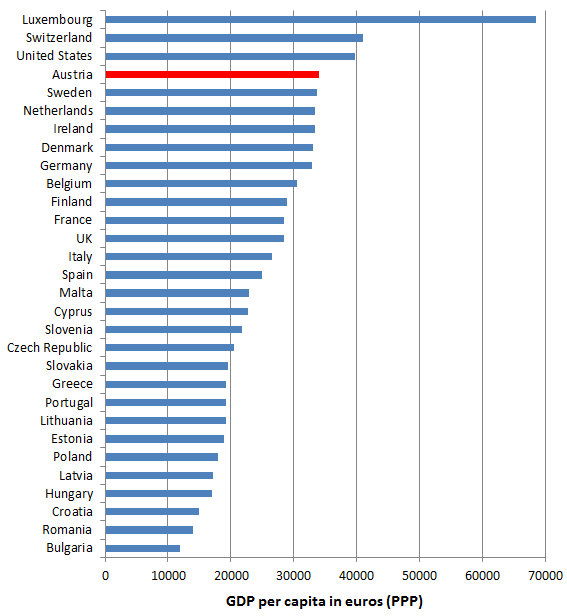 In 2013, Austria had a higher real GDP level than before the crisis (i.e. in 2007), which is only true for about half of the EU member countries (see Chart 2). In countries like Greece and Italy, total production is still far lower than it was prior to the crisis. 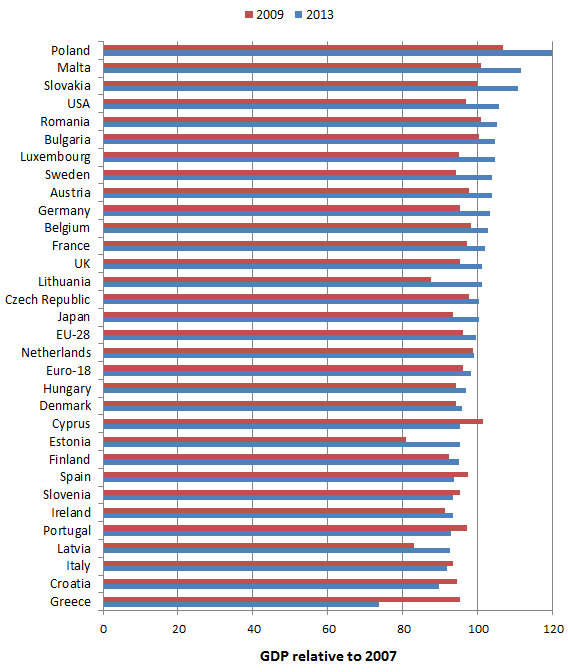 Note: The chart shows each country’s GDP in relative terms compared with the country’s GDP in 2007. A value of 100 indicates that GDP was identical to the level it was at in 2007, with figures above/below 100 showing the relative change in GDP in 2009 and 2013. Source: Eurostat; compiled by author

However, other countries inside and outside the euro area did better. While in 2013 Austria’s GDP exceeded the pre-crisis level by 3.7 per cent, economic activity in Poland – the best performing EU economy – was 20 per cent higher than in 2007. The US economy also performed better than many European ones. Austria recovered quickly from the Great Recession of 2009, but for two years GDP has been more or less stagnating. Following a slump of 3.8 per cent in 2009, real GDP rose by about 2 and 3 per cent in 2010 and 2011, respectively. But then the recovery stalled, and in 2013 and 2014 GDP only rose by 0.2 to 0.3 per cent.

As Chart 3 shows, after its EU accession in 1995, for several years Austria achieved higher GDP growth than the euro area average as well as compared to its largest trading partner Germany and to Switzerland. But recently, the Austrian economy has lost ground.

Chart 3: Economic growth differential between Austria and other countries and the euro area 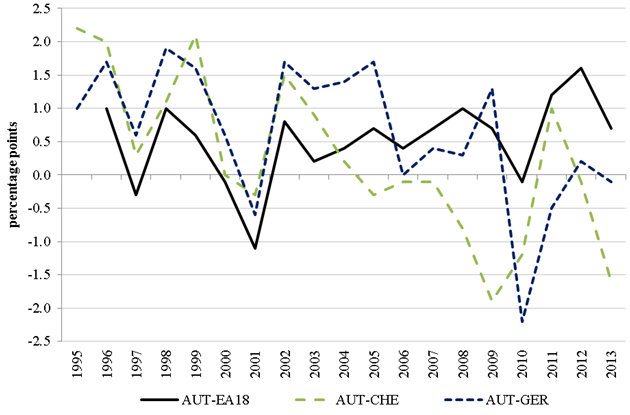 Note: The figure shows the difference in GDP growth between Austria and other countries and the euro area average, respectively: ‘AUT’ refers to Austria, ‘GER’ refers to Germany, ‘CHE’ refers to Switzerland, and ‘EA18’ refers to the euro area. Source: Eurostat; compiled by author

The slowdown has both external and domestic reasons. The most important domestic demand component, i.e. private consumption, has only grown very little since 2011. Reasons for this are a stubbornly high inflation rate (compared to the euro area average and to Germany), but also a rising tax burden. The Austrian income tax system is quite progressive: that is, nominal wage increases are to a large extent eaten up by higher taxes. In addition, the government raised indirect taxes so as to curb the fiscal deficit.

In addition to flat private consumption, the typical engine of economic recoveries in Austria has stuttered of late. Typically, first Austria’s exports recover, and then companies start to invest more. But in the recent past, Austrian export performance has been disappointing. This was not only caused by a lack of foreign demand. In addition, and more worrisome, Austrian companies have lost ground on international markets. Chart 4 shows the export performance, measured as actual growth of exports relative to the growth of the country’s export market. 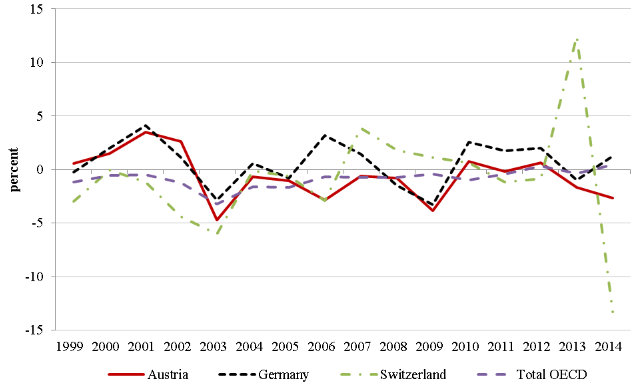 Due to the increasing integration of emerging markets into the world economy, industrialised economies in general lost market shares. But in recent years countries such as Germany and Switzerland have performed better than Austria. Part of the explanation for this development is certainly the fact that for Austrian companies Italy and Eastern European countries, which were not doing so well in this period, are more important. Therefore, a diversification of export markets would be beneficial. However, the high tax burden on labour is also problematic, particularly because Germany – Austria’s most important trading partner by far – has curbed its labour costs. Therefore, Austria faces the danger that German companies (e.g. in the car industry) substitute imports of intermediate goods from Austria by their own production.

Labour market: unemployment is low, but rising and there is a low employment rate among the elderly

During the Great Recession of 2009, Austria was one of the very few countries in which unemployment only rose marginally. However, in 2013 and 2014 the unemployment rate rose quite substantially. As a result Austria lost its position of the country with the lowest unemployment rate in the EU to Germany. What is also problematic, not least with respect to the pension system, is a low employment rate among the elderly.

While the overall employment rate (employed persons in relation to the labour force in the age group 15 to 64) of slightly below 73 per cent (second quarter of 2014) is well above the EU average of just 65 per cent and also not far behind Germany (73.4 per cent) or Switzerland (about 80 per cent), the employment rate of people aged 55 to 64 is only 47.7 per cent, compared to 65 per cent in Germany or 71 per cent in Switzerland. In the light of a declining working-age population, the employment of older workers has to increase in Austria, and the pension age will also have to be raised.

Research and development is key to maintain the growth potential

According to recent estimates by the European Commission, Austria’s potential GDP growth declined from 2.7 per cent in 1999/2000 to about 1 per cent per year since 2009. This decline was to a large extent caused by rising structural unemployment, decreasing working hours and low or even negative investment. But also growth of total factor productivity, which measures technical progress, slowed down markedly. Since the labour force will decline in the future, it is essential not only to raise the labour market participation of the elderly, but also, at least equally importantly, to increase spending on research and development (R&D).

Chart 5: Spending on research and development in the EU and beyond 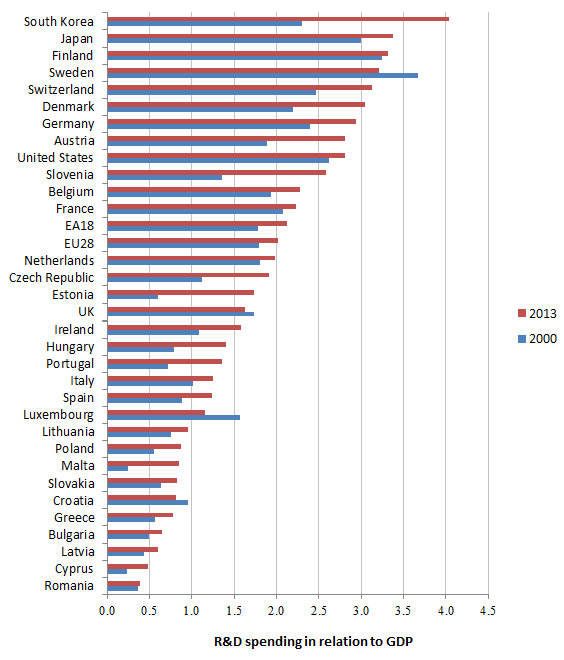 Note: Figures for Croatia, Malta and Poland are for 2002, and Lithuania for 2004 instead of 2000. Figures for Ireland, Switzerland and the United States are for 2012, and Japan and South Korea 2011 instead of 2013. Source: Eurostat; compiled by author

As can be seen from Chart 5, Austria managed to increase R&D spending from 1.85 per cent of GDP in 2000 (1.53 per cent in 1995) to 2.81 per cent in 2013. However, other countries like South Korea and the United States, but also the Scandinavian countries and Switzerland are quite far ahead. For a country with high wages and almost without natural resources, R&D is essential for maintaining its potential GDP and for surviving the ever-harder competition on the world market.

Note: This article gives the views of the author, and not the position of EUROPP – European Politics and Policy, nor of the London School of Economics. Featured image credit: mrWerner (CC-BY-SA-3.0)