Following the Greek elections on 25 January, the Greek government has attempted to negotiate a deal with other European states, notably Germany, over the country’s debt. But how might opinions within Germany affect the prospects of such a deal being reached? Kai Arzheimer writes on German public opinion and the views of German political decision-makers on the issue. He notes that while German citizens are generally hostile to taking a more conciliatory approach toward Greece, polling also indicates that it is not assigned a high level of importance by voters, ensuring that some form of compromise would still be politically feasible for the German government.

Immediately after the Greek election on 25 January, the new Greek Prime Minister, Alexis Tsipras, and his Finance Minister, Yanis Varoufakis, demanded a renegotiation of the country’s debt. Their German counterparts, Angela Merkel and Wolfgang Schäuble, were equally quick to respond that any further debt relief was out of the question, and that Germany would insist on Greece honouring her obligations. While the negotiations at the level of working parties might already have begun, Greece’s attack on “Germany” and the Merkel government’s verbal retaliation will make it more difficult to find a solution, as no side can afford to lose face.

So far, the public posturing has had little effect on public opinion within Germany. By and large, Germans are still surprisingly sanguine about Europe and the euro, with soft-Euroscepticism being a niche interest. Even the Alternative für Deutschland (AfD), the only German party that is widely billed as Eurosceptic, has largely focused on immigration in recent months. The explanation for this conspicuous absence of any upheaval is simple: the south of Europe is largely perceived as someone else’s problem by the German population.

A recent series of Politbarometer polls shows this very clearly. On the one hand, the polling indicates that more than 80 per cent of German voters think the Eurozone crisis will continue, and 40 per cent expect that the situation will further deteriorate in the aftermath of the Greek election result (although almost 50 per cent say that they don’t know what the effect will be). However on the other hand, only four per cent of respondents included the Eurozone crisis in their respective list of the most important political problems facing Germany.

So far, ordinary voters are not outraged, as such, by the Greek government’s demands, but instead find them simply to be misguided. Only 13 per cent of respondents say that the conditions imposed on Greece by the Troika should be relaxed, and, as the figure below shows, only 20 per cent support another round of debt relief for Greece, with vast majorities of nearly 80 per cent against such measures.

Figure: Responses in Germany to the question: “Should Greece be given further debt relief?” (30 January 2015) 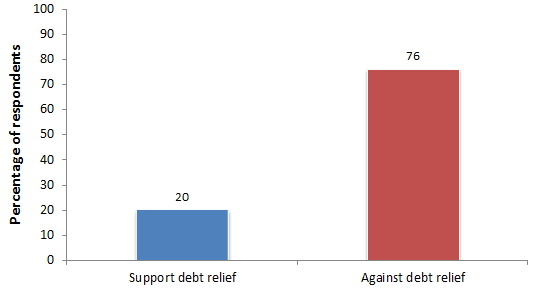 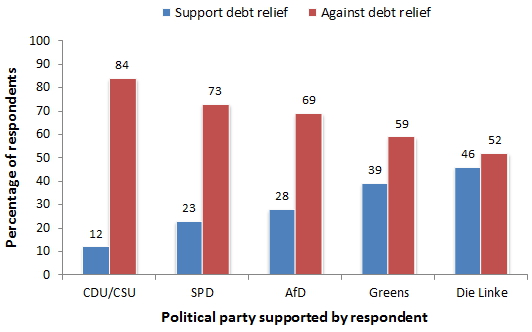 [/fusion_tab]
[/fusion_tabs]
Note: Figures are shown without ‘don’t know’ responses (4 per cent indicated they didn’t know in the first chart, while this varied for the supporters of each of the German parties). For more information on each of the parties see: CDU/CSU, Social Democratic Party of Germany (SPD), Alternative für Deutschland (AfD), Greens, Die Linke. Source: Politbarometer

Not even the prospect of a “Grexit”, which was seen by many observers as a major threat to the very existence of the euro in the past, seems to have created much excitement among German voters. Just over 50 per cent of those interviewed were in favour of Greece staying within the Eurozone, while one third wanted them to go – the rest being undecided. Nevertheless, given the state of the polls on the Greek issue, Merkel and Schäuble will not want to be seen as caving in to the Syriza-led Greek government.

Alongside German public opinion, the opinion of political decision-makers is also hostile to the notion of yielding to Greek demands. The German media have been running elaborate calculations showing that Greece has already been relieved of substantial parts of its debt and is paying lower average interest rates than Germany. Even German trade union leaders have gone on record saying that Greece is suffering from a lack of structural reforms and investments, and that further debt relief would not help.

The only major German political party showing any sort of support for Syriza is Die Linke (The Left). The party, which has always been sceptical of what it perceives to be a ‘neoliberal’ European Union, has voiced support for Tsipras and Syriza in the past. But their constituency is chiefly worried about cuts to the German welfare state. Even for Die Linke, the idea of writing off debt that is essentially guaranteed by the German taxpayer would be a tough sell to its core supporters.

Does this state of public and political opinion rule out any sort of compromise between Athens and Berlin? Not necessarily. The anti-German rhetoric of Tsipras and the confrontational style so far pursued by Varoufakis must undoubtedly have created some bad blood in German government circles, but the general public for the most part simply appears bemused by these approaches.

There is no indication of wide-spread anti-Greek sentiment in Germany, and since the issue still ranks so low on the public’s agenda (which is dominated by worries about immigration, terrorism, and unemployment), a face-saving compromise of some description should still be possible. With this stated, Syriza’s apparent strategy of provoking the German government in a bid to win favour with voters in Greece and strengthen their bargaining position is arguably making this rapprochement a lot more difficult than is strictly necessary.

Note: This article gives the views of the author, and not the position of EUROPP – European Politics and Policy, nor of the London School of Economics. Featured image credit: European People’s Party (CC-BY-SA-ND-NC-3.0)

German federal elections preview: the parties and their campaigns