Portugal was one of the worst hit countries by the Eurozone crisis, but emerged from its bailout programme in 2014. As part of our ‘Economies of Europe’ series, Francesco Franco provides an account of the development of the Portuguese economy since the crisis, including some of the key challenges it now faces. He notes that Portugal has only posted a current account surplus twice since 1960, and requires a rebalancing of its economy from non-tradable to tradable sectors. He argues Portugal should also aim to increase the education and skills of the existing labour force, given the country currently lags behind other EU states in this area.

Portugal faces two main economic challenges. The first is to rebalance the economy from the non-tradable to the tradable sector. The second is to improve the education and skills of the existing labour force.

The spill-overs of the financial crisis had dire economic consequences in countries with sizable external imbalances and more dysfunctional internal markets. Portugal fared poorly on both and had to ask for international assistance in 2011. On the eve of the emergency loan granted under conditionality by the Troika – the IMF, the ECB and the EU – the current account deficit had averaged 10 per cent of GDP for at least a decade.

The massive capital inflows that started when financial markets became certain of the event of the single currency, somewhere around 1996 or 1997, can be explained by the convergence of nominal interest rates toward German levels. A similar phenomenon occurred in other peripheral European countries and we now know that for most of those countries the inflow of capital did not translate into higher productivity.

Figure 1: Balance of payments between Portugal and the rest of the world as a percentage of GDP from 1960 – 2014 (click to enlarge)

Note: The figure shows the total balance of payments between Portugal and the rest of the world in a given year as a percentage of GDP. The three interventions by the International Monetary Fund in Portugal during this period are indicated with dotted lines. Every year shown indicates a current account deficit with the exception of 1969 and 2014. Source: AMECO

Notice that current account deficits existed under at least four different exchange rate regimes. First, during the policy of stability of the Portuguese escudo with respect to the pound sterling and the dollar, which ended in 1977, the year of the first intervention of the IMF. Second, under a crawling peg that lasted until 1990, a period which also witnessed an IMF intervention in 1983. Third, during the entry into the European Exchange Rate Mechanism in 1992 after a two years transition period, and finally during the single currency regime adopted in 1999. The first challenge for Portugal is therefore clearly to change into an economy capable of having a medium to long run external balance.

The internal devaluation adjustment that Portugal is going through is difficult. It requires both well-functioning markets and a coherent set of policies at the euro area level. By well-functioning, I mean markets that permit adjustment through the demand-supply mechanism and deliver competitive outcomes. Ireland, for example, appears to have better functioning markets than Portugal. This did not protect Ireland from the consequences of a tremendous financial/banking shock, but it helped to quicken the adjustment relative to Portugal. This is apparent in Figure 2, below, where the disinflationary process in wages (labour market) and final prices (goods market) brought by higher unemployment was much faster in Ireland (Franco 2011).

Figure 2: Comparison of selected economic statistics in Portugal and Ireland from 2006 – 2014 (click to enlarge) 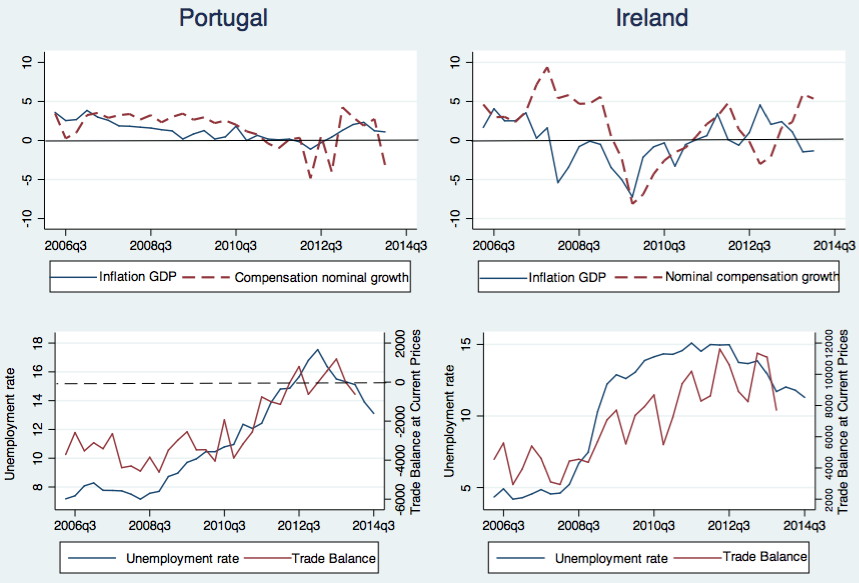 The policy prescriptions to improve labour market functioning are reforms that increase job flexibility and maintain workers’ protection. Fairness would dictate that both flexibility and protection should be addressed simultaneously. During the last couple of years Portugal passed a number of laws and structural reforms in the labour market that go in this direction. Severance payments have been reduced from 30 to 12 days per year of work with a ceiling of 12 months, while the bonus for overtime work has been halved and holidays have been reduced from 25 to 22 days. More reforms are needed and some of the implemented changes, like the collective wage bargaining mechanism, must be improved.

The policy prescriptions for better functioning goods markets are to increase competition in the non-tradable and networks sectors. In Portugal the main suspect in this sense is the energy sector, which after large investments in renewable energy projects during the past decades, sells 90 per cent of the electricity at guaranteed prices, which will increase by 1.5-2 percent per year for the next 8 years.

An important caveat is that we need to recognise that scale and some market power can be a source of research and development, and innovation, especially in the information and communication technology sector, and energy sector. If this is the case, the creation of integrated pan-European markets in network industries can break national resistance (which is very strong) to better competition, allow sufficient scale for innovation and simultaneously permit European countries to operate on a level playing field by facing similar telecommunication and energy costs.

This is the solution the euro area has adopted with the Banking Union to ensure that firms face similar competitive conditions in crucial inputs such as financial services and credit. The latter goes beyond the competition argument as it also aims to improve the transmission of monetary policy across the euro area. When fully implemented, Portugal, like the other periphery countries, will see credit supply conditions improve and be at par with other euro members.

This will be important after a period of restricted access to the wholesale market which forced banks to substitute interbank financing with deposits and liquidity from the eurosystem. Normalised credit conditions will also allow the deleveraging of the corporate sector to begin, the most problematic sectorial debt for Portugal (156 per cent of GDP). Improving labour markets, credit markets and competition in the network sectors will help to rebalance the economy toward the tradable sector.

Nevertheless, it might not be sufficient to reabsorb sufficiently rapidly the large numbers of unskilled unemployed, which leads to the second challenge for Portugal: the need to improve the education of its labour force. As Figure 3 illustrates, the Portuguese labour force is primarily composed at present of very low skilled workers in comparison to other EU countries.

Figure 3: Education attained by the labour force in Portugal and selected EU countries from 1990 – 2015 (click to enlarge) 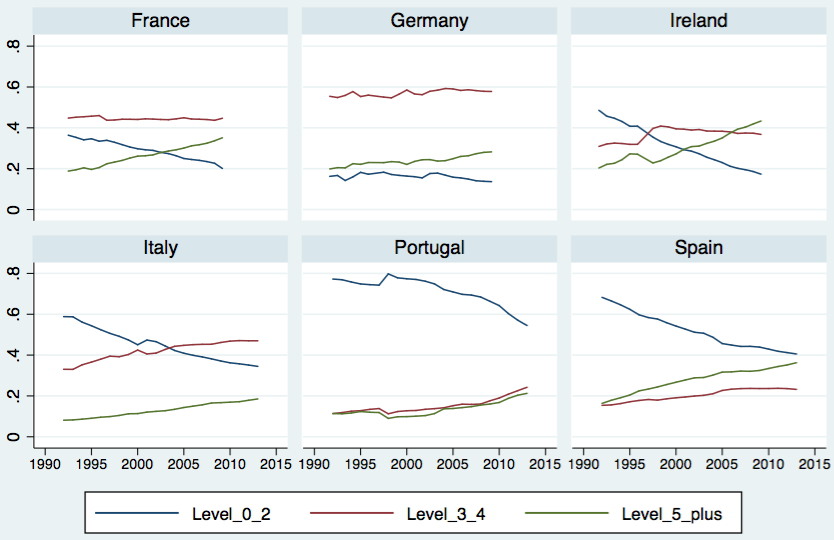 Education has improved during the last decades to the extent that knowledge and skills of the flow of new entrants in the labour force is satisfactory, but it started from such a low average level that the actual stock is still a problem. The deployment of active labour policies oriented at improving skills and education to match the labour demand of the tradable sector has started, but it is probably not on a sufficiently large scale.

The improvement in human capital, through better-educated new entrants but also better trained low-skilled workers, will increase productivity. Policies must help market forces to direct this higher human capital towards the tradable sector in both the services and goods industries. Increased productivity will then improve competitiveness until Portugal will produce enough value to have a medium run balanced external account. This is, however, a medium term scenario and it is conditional on policy coherence at the European level.

Note: This article gives the views of the author, and not the position of EUROPP – European Politics and Policy, nor of the London School of Economics. Featured image credit: Kārlis Dambrāns (CC-BY-SA-3.0)