In the early 2000s, the then SPD-Green government in Germany implemented a package of policies known as ‘Agenda 2010’, which aimed to reform the country’s welfare system and labour market. Stefan Selke writes on the impact of these reforms ten years later. He argues that while the unemployment rate in Germany is currently low by historical standards, the picture is not quite as positive as it appears, with substantial numbers of German citizens still at risk from poverty.

In early 2015 the so-called ‘Agenda 2010’ celebrated its tenth anniversary. This political reform package introduced a completely new model of labour and social policy in Germany, following the paradigm already institutionalised in the UK.

However, the beginning of this process was accompanied by truly strange affairs. Agenda 2010 was the idea of a previously convicted manager named Peter Hartz. Against the background of bribes paid to the work council of the car enterprise Volkswagen, Hartz was sentenced to jail simultaneous with the introduction of the political reform. Nevertheless, the German welfare benefit schemes Hartz I to Hartz IV are named after him. In October 2004, the German Parliament approved the re-launch of the Federal Employment Office (Hartz III) and the merger of unemployment compensation and social benefits (Hartz IV).

Since the end of World War II, no other reform has changed Germany more than Agenda 2010, with shifts in the way people think, feel and act. Using narrative portraits of those affected by this policy, in my book Schamland (Land of Shame) I argue that even the term “Hartz IV” marginalised a significant portion of the population in terms of social and cultural inclusion. “Hartz IV” has become synonymous with poverty, exclusion and charity. Even the leading German dictionary Duden coined the verb “hartzen”, which they explain by referring to people who are “too lazy for any activity or job”. The general level of suspicion of the unemployed generated by the reform couldn’t be any worse.

Agenda 2010 is still controversial. Former German chancellor Gerhard Schröder regarded the reform as a “far-reaching structural improvement, able to place Germany at the top amongst all countries in just one decade”. That would be now, the year 2015. But is Agenda 2010 actually the reason for a historically low unemployment rate in Germany, as Frank-Jürgen Weise, the director of the Federal Employment Office, claims? In order to answer this question, a closer look is needed.

Agenda 2010 and unemployment in Germany

For an official view of the state of the nation one can refer to the 4th national report on poverty and wealth in Germany or the freshly published (February 2015) alternative poverty report. While the official report claims to shape a new “policy of social mobility” the poverty reports of “Der Paritätische Gesamtverband” outline a second narrative – which is even termed the “divided republic”.

After previous national reports in 2001, 2005 and 2008, the empirical work (samples from 2007 to 2011) provides analyses based on a wide variety of empirical surveys and panels. At first glance the results are positive. As shown in Chart 1 below, in January 2015 the overall unemployment rate was at merely seven per cent (approximately three million people). Job offers have increased while underemployment has decreased. The number of benefit claimants (“Arbeitslosengeld II” = “Hartz IV”) last reached a peak in 2006 with 5.4 million claimants, with current levels at around 4.3 million. 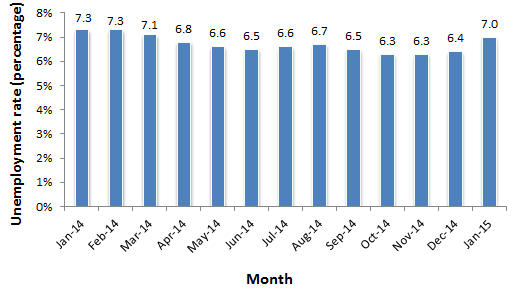 But this sunny story carries more than one dark footnote. Numerous academics criticise Agenda 2010 because the new jobs have only emerged outside the social insurance system. The German government claims it is working towards sustainable future development, but at the same time some of the innovations of social policy have seen cutbacks of jobs that contribute to the social insurance system. The downside of the miracle of new jobs is simply the fact that Germany has an above-average rate of part-time employment contracts (25 per cent).

Taking this into account, the labour force participation rate is actually lower and the positive picture blurs. Moreover, temporary employment or forced part-time work are on the rise. The number of temporary workers has more than doubled in recent years. Roughly seven million people have so-called “Minijob” contracts, which don’t provide employee health benefits/social insurance. Last but not least, the academic field is also being transformed into a low-pay sector. Such forms of employment do not offer any protection against fundamental risks, but rather contribute to the institutionalisation of precarious life circumstances, which is becoming the general feeling in the country, seen as a mixture of uncertainty and social isolation.

Agenda 2010 is not only a political reform, but is also a symbolic threat to citizens, as well as a disciplinary instrument. Even employees who have worked the same job for many years end up receiving relatively low welfare payments after a short grace period. Some eventually become dependent on charity systems such as soup kitchens or food banks. It has been shown that it is not a coincidence that the German charity system began experiencing a boom at the same time as the introduction of Agenda 2010. This especially applies to food banks. However, food banks are not even mentioned in the 4th national report on poverty and wealth. Few federal reports dare to criticise the new charity system.

Behind the scenes, society does not always represent the ideal outlined by politics. For example, the relatively low unemployment rate shows extensive regional disparities. The unemployment rate in East Germany is approaching double that of the West. Comparing the federal state with the lowest unemployment rate (Baden-Württemberg at 4.2 per cent) with the federal state with the highest rate (Mecklenburg-West Pomerania at 12.3 per cent), the ratio reaches 1 to 3, as Chart 2 shows. Citizens with a migrant background are more likely to be affected by unemployment. Furthermore, the current at-risk-of-poverty rate among this group is 26.8 per cent, which is twice as high as the average rate among the total population. 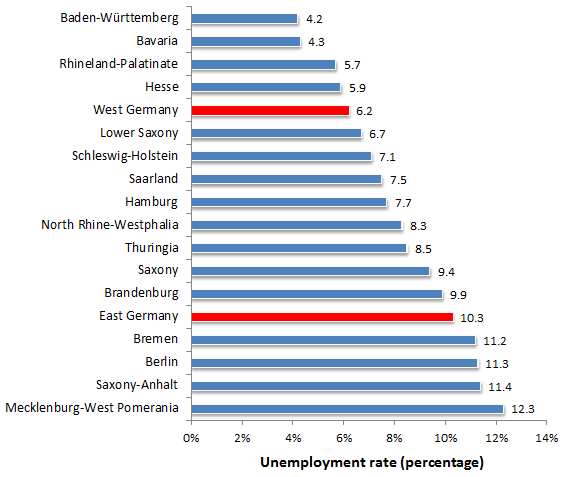 Agenda 2010 is also an example of the way that austerity can generate unintended consequences. One such effect is increasing child poverty in West (13.7 per cent) and East Germany (23.5 per cent). In July 2014, 1.64 million children under the age of 15 depended on Hartz IV benefits. Another problem is slowly increasing poverty among the elderly. A whole cohort of women will be punished for having raised their children, given as they age they will be more and more affected by poverty. In 2013 roughly 500,000 senior citizens (aged 65 and above) were poor, particularly women in West Germany. These women have to manage their everyday lives with a basic income of 391 euros per month.

The psychological effect of this on individuals forms one of the themes of my book, Schamland, which focuses on the way that shame functions as a new form of political regulation in Germany. Increasing numbers of senior citizens must continue working in order to get by. The rate of employment among senior citizens has doubled over the last 20 years. Nearly five per cent of retirees still work, a third of them simply in order to survive. Poverty among the elderly is drastically underestimated in political and public discourse and has therefore become trivialised to a large extent. Even if the average rates of poverty among seniors do not differ between East and West Germany, there are immense regional disparities. Forecasts for 2021 show increasing social inequalities in eastern parts of the country. As it happens, the estimates for the capital, Berlin, are the most pessimistic.

A relatively new development is the introduction of a minimum wage, which also demonstrates the fundamental ambivalence of German policymaking. Introduced at the beginning of 2015, the minimum wage is fixed at 8.50 euros an hour.Despite broad agreement among all political parties before its introduction, criticism has been voiced about several effects of the practical implementation. Job cutbacks, the ‘mania of bureaucracy’ and misuse are among the main fears. On the one hand there are numerous exceptions (e.g. for transit truck drivers). On the other hand the wage dumping lobby already largely ignores the minimum level of the wage. As a result unreported employment is increasing in the informal economy.

These are just some examples demonstrating that all that glitters is not gold. So far, Germany has not learned the lesson from the assessment of the Economic and Social Council of the United Nations in 2011. The final report of the council articulated criticism on 37 issues of German social and labour policy, emphasising the human right to social security, which according to the UN council is still being disregarded in Germany. The level of Hartz IV benefits has been criticised on the grounds that it does not guarantee a reasonable standard of living, among other critical issues. Despite the demands of the council, Germany still lacks an appropriate and extensive programme for the reduction of poverty against the background of human rights.

Instead, German society is relying more and more on pre-modern charity systems of poverty relief such as food banks. However, these systems have practical limitations – indeed, some of the first food banks are now suffering from food shortages. They have chosen to face this form of austerity by suspending access to users for certain periods of time (up to one year).

Will Germany learn from its mistakes? Or will political creativity limit itself to inventing more instruments of social degeneration? The kind of story we will be able to tell in the next ten years remains to be seen.

Stefan Selke – University of Furtwangen
Stefan Selke is Professor of Sociology and Social Change at the University of Furtwangen, Germany. His current research interests lie in the economy of poverty, reputation capital in the charity market, transformative (public) science and the digitalisation of society (in particular lifelogging). He has been researching the phenomenon of German food banks since 2006, beginning with an ethnographic study during one year. He has become famous through his book fast ganz unten (2008) – the first book about food banks in Germany.