In recent years, the possibility of changing the electoral system has emerged on the political agenda of many democracies. In 2011, the Conservative-Lib Dem government in the UK organised a referendum on the question of replacing the country’s first past the post system used to elect the House of Commons with an Australian-like alternative vote system, and the debate over electoral reform has reignited after the 2015 general election.

Elsewhere, in the 1990s, the Italian government implemented a variant of the German mixed-member system for the election of the lower house of the national parliament. About 10 years later, the decision was made to turn back to a proportional representation system with a seat bonus for the largest coalition. During the 2012 presidential election campaign in France, several candidates (including the current President François Hollande) advocated the introduction of some form of proportionality in the two-round system used for legislative elections.

Following these events, a broad community of researchers have been studying the reasons why governments and legislators choose one type of electoral system over others. According to many of these authors, the ruling elite seeks to secure its own position by anticipating the effect of various possible electoral systems on the allocation of seats.

Despite their international and comparative focus, the assumption is often made in these studies, usually implicitly, that episodes of electoral system choice are independent from each other. Actors involved in these processes are often presented as being completely unaware of, or at least not affected by, what is happening abroad. Yet there is no reason to discard the possibility of international diffusion of electoral systems. In a recent study, we use data from European countries between 1945 and 2011 to test the hypothesis that the adoption of electoral systems that are superior in terms of electoral outcomes tends to spread among peer countries.

The case for limited proportional representation

Every electoral system has pros and cons. One of the fundamental issues for electoral engineering is the trade-off between fair representation and accountability. Proportional representation tends to produce more inclusive parliaments than first past the post. However, the system’s rules also result in a greater number of parties in parliament, and therefore a decrease in the chances that a single party will win an absolute majority of seats. Under such circumstances, governments are usually composed of coalitions of more than one party, which tend to undermine the identification of which parties are to blame (or to be rewarded) for good and bad policy outcomes.

However, in an article published in 2011, John Carey and Simon Hix suggested we alter our perceptions of this trade-off by arguing that an electoral ‘sweet spot’ exists. This sweet spot emerges when a system tempers pure proportional representation to produce an arrangement whereby excessive party fragmentation and the unfair exclusion of small parties are balanced, thus achieving the most efficient representation. According to them, a proportional representation system that is combined with either low-magnitude multimember districts (i.e. districts where a low number of representatives are elected) or high electoral thresholds can hit the electoral sweet spot. Our research builds on this by arguing for the diffusion of low district magnitudes and high electoral thresholds in the post-war period in Europe.

In our study, we analyse spatial-temporal trends in the use of low district magnitudes and high electoral thresholds in proportional representation systems of European countries between 1945 (or the first democratic election) and 2011. To do so, we rely on data collected within the Electoral System Change in Europe since 1945 project, for which national experts have been invited to translate the electoral rules of all European democracies.

Our sample shows quite a large variation in the usage of low district magnitudes and high electoral thresholds. While some countries have continuously used at least one of these mechanisms and often both (especially recent democracies such as Estonia, Hungary or Lithuania), other countries, such as Finland, Luxembourg and the Netherlands, have never implemented any of them. On average, 75 per cent of European countries have used at least one of the mechanisms at one point in time.

We also observe an overall increase in the use of at least one of the two electoral mechanisms. This increase is particularly striking in the 1990s following the democratisation of Central and Eastern European countries. Most of these countries adopted high electoral thresholds, which are nowadays used to elect national legislatures in more than 50 per cent of European democracies employing proportional representation (although they were almost never used at the beginning of the covered period). By contrast, the overall use of low district magnitudes remains relatively constant over the sampled period (at around 30-40 per cent). The following table describes the countries included in our analysis, and the first election and last election for which low district magnitudes and high electoral thresholds have been used. 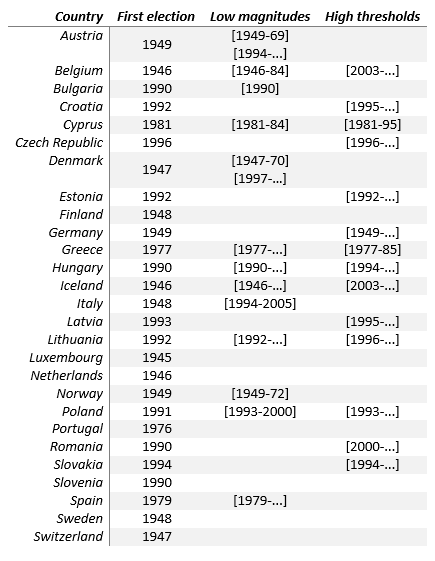 Note: The table shows the first democratic election included in the study alongside the period in which countries have used either low magnitude district or high electoral threshold proportional representation systems.

To test our hypothesis, we estimate logistic models predicting the adoption of either low district magnitudes or high electoral thresholds according to the proportion of peer countries that have adopted them within a given time-span. We use several definitions of peer countries, namely historical (same democratisation period), linguistic (same linguistic group), and geographical (common boundaries). The figure below reports the coefficient estimates (and the 95 per cent confidence intervals) associated with the diffusion variable for low district magnitudes, for historical peer countries, and for all time-spans between two (i.e., the current and the immediately preceding years) and ten years.

Figure: Result of the analysis 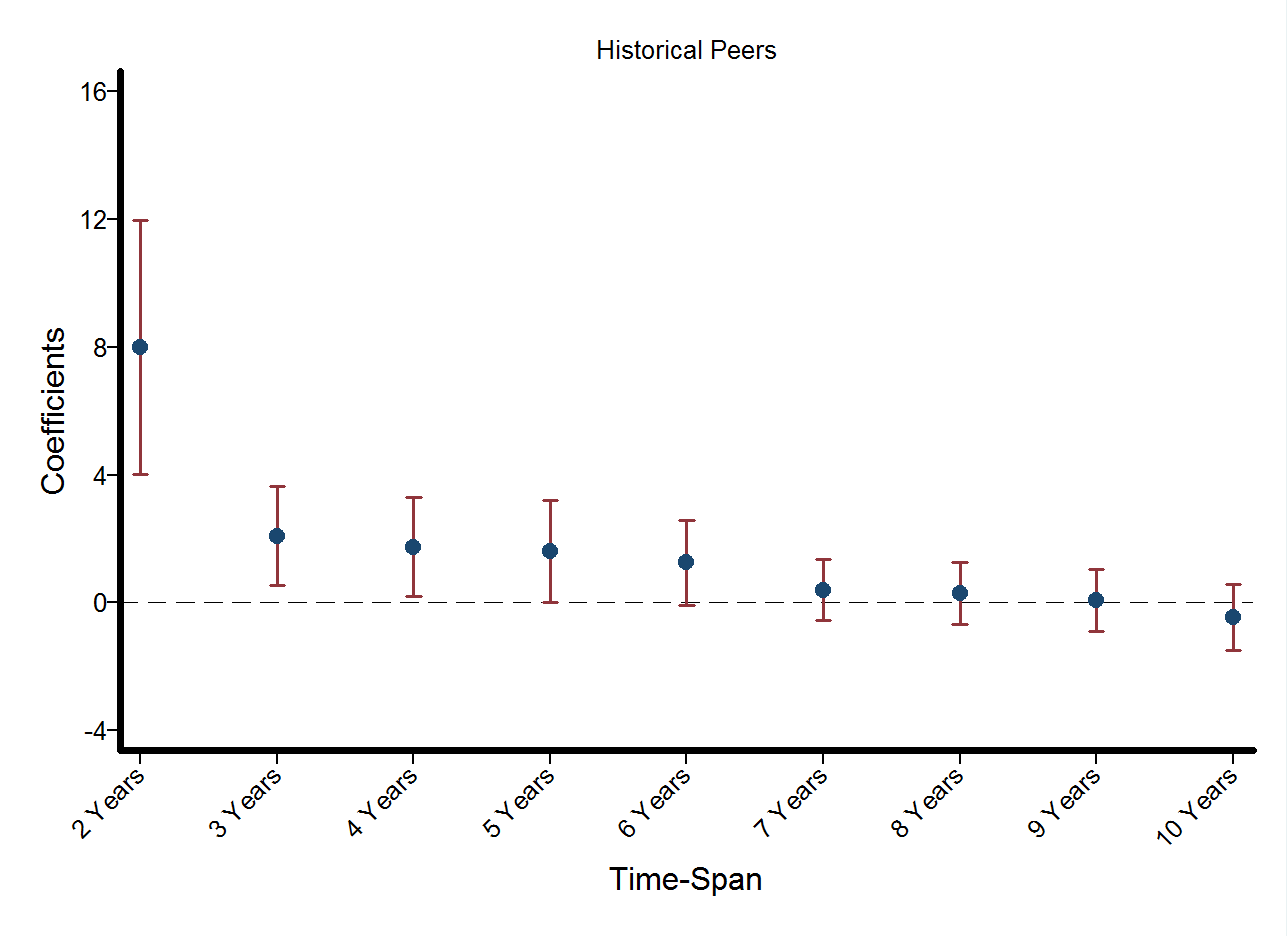 Note: See the author’s longer paper for more information on these calculations.

We see that the effect of diffusion diminishes as the time-span increases. The diffusion effect is strong and statistically significant when diffusion is defined as the proportion of adoptions among peer countries within the last two, three or four years. This effect is much smaller when the diffusion time-span is set at five years (and more). These results suggest that the diffusion trends among peer countries are rather short-lived and that the adoptions abroad stop having an influence on domestic decisions after a couple of years. The results are similar for adoption of high electoral thresholds.

These effects are robust to various statistical specifications, to our three definitions of peer countries, and to the inclusion of various controls including those capturing the classical explanation of electoral system choice (i.e., seat-maximisation and party system fragmentation). As further evidence supporting this argument, we also find elements of diffusion in parliamentary debates surrounding episodes of electoral system change in several countries.

Overall then, despite the international and comparative focus of much of the scientific work on electoral system choice, the literature still often fails to take into consideration that electoral engineering processes at the national level do not occur in a vacuum. Our empirical analysis supports the existence of short-lived international trends in the adoption of low district magnitudes and high electoral thresholds. The likelihood that a country adopts one of these arrangements increases with the number of peer countries that have recently adopted a similar system.