The island of Lampedusa has become the focal point of attempts to address irregular migration in the Mediterranean, but how does the EU’s border system at Lampedusa actually function? Giacomo Orsini writes on the nature of the system, noting that it represents a complex combination of surveillance and detention measures. He argues however that the attention focused on Lampedusa itself is disproportionate, with the majority of undocumented migration into the EU taking place via other routes.

Lampedusa constitutes ‘the quintessential embodiment of the Euro-African migration and border regime’. Yet what precisely happens around this tiny Italian island rarely reaches the public. Mainstream narratives instead tend to distort public opinion and inflame the debate.

While the EU plans its military operation to ‘disrupt human smuggling networks in the Southern Central Mediterranean’, this article aims to provide some much needed clarity on the present situation, based on my own direct knowledge of the island. Indeed, by understanding how the border system in Lampedusa actually functions, and the major interests at stake in running such a costly apparatus – both in terms of the human cost and the financial cost for EU taxpayers – it becomes easier to appreciate the role that Lampedusa plays within the broader EU external border regime.

The ‘concentric circles’ of the border at Lampedusa

The EU’s external border structures in Lampedusa are complex. With the island at its core, its functions spread over a vast area, enclosing seawaters over a distance of tens of nautical miles. As such, the border can largely be divided into two areas: those areas at sea and those on land.

Once boats are detected, the Italian navy and the other European navies operating in the area – mostly within the frame of Frontex operations – eventually rescue migrants. However, at times migrants have been simply (and illegally) pushed back to their original departure country. Fishermen and other civilians often take part in these highly risky operations. In general, all of these actions, from detection to rescuing, take place several miles away from Lampedusa: once migrants board a rescue boat they are then taken to the island.

On Lampedusa itself, there is the Favarolo quay: a gated dock where migrants are disembarked, including those that have died, and where medical aid will be delivered to those in need. From there, a bus takes migrants to the island’s holding centre. This is a constantly overcrowded facility where ‘hosts’ are often detained for months, even though the law states they should be deported to detention centres in mainland Sicily and the rest of Italy no later than 96 hours after arrival.

At the centre, if the internal management is the sole responsibility of private actors, numerous law enforcement officials manage security and surveillance. Once detention ends, migrants are deported away from the island. Although in the past direct flights have transferred migrants back to Libya and Tunisia from Lampedusa’s airport, in almost all cases migrants, accompanied by an escort of law enforcement officials, are now taken to mainland Sicily via the only ferry connecting the island with the rest of Italy.

Overall the border system can be conceived of as a form of ‘concentric circles’ with the aim of slowing down and steering migration, rather than stopping it completely. The figure below presents a visual representation of the system and its border functions as they spread across the island and the sea surrounding it. 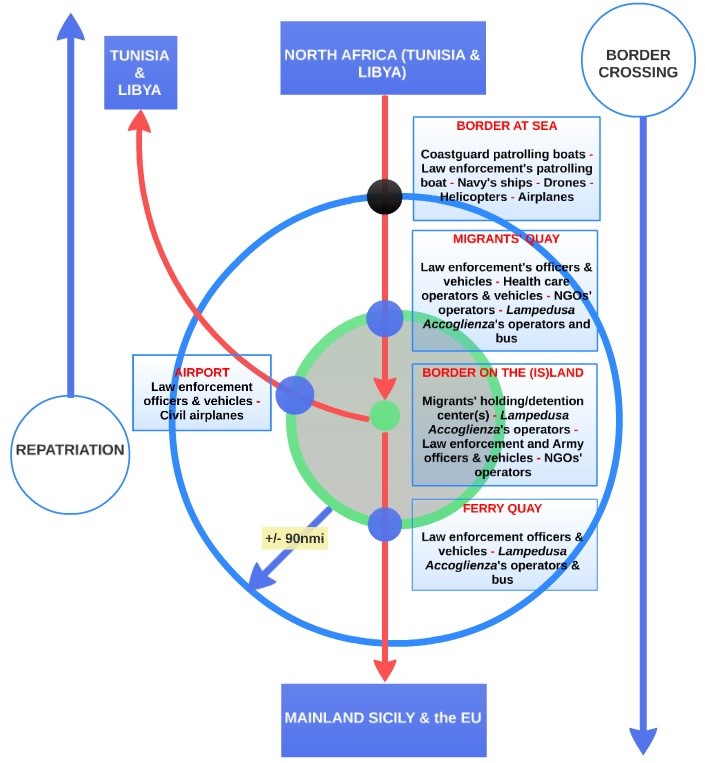 In addition to this complex border apparatus involving several different actors at a multitude of levels – local, regional, national, European and global – a variety of other stakeholders also converge around Lampedusa, given its status as one of the most iconic spots in the EU’s external border regime. Several naval and military actors operate in the area, with geostrategic calculations developing alongside the maintenance of the border regime.

The border system also entails sophisticated radar and surveillance technologies developed by major European – as well as non-European – defence and security corporations within the scope of an EU funded research project, the EU Security Research Programme. While the border at sea has become a notable commercial opportunity and a major geostrategic factor for national governments, the land-based detention system has also attracted the interest of a diverse range of actors. Private companies, Catholic organisations and cooperatives have all contributed to the running of the detention centre in exchange for daily fees of 30 to 50 euros per migrant provided by the Ministry of the Interior. This corresponds to a business that is now estimated to be worth millions of euros per year.

A purposeless and deadly system

Europe’s external border is therefore both a profitable business for many actors, and a deadly obstacle for others. Yet the precise rationale for the existence of the system and its associated costs remains debatable. The official justification cites the capacity to ‘combat more effectively terrorism, illegal immigration and human trafficking’; yet there is an absence of empirical data that confirms any relationship between illegal immigration and terrorism. A series of practical evaluations have also undermined the prevailing narrative in support of the current system.

Indeed, despite Lampedusa’s centrality in the construction and representation of Europe’s border regime, the island itself plays only a marginal – if not entirely irrelevant – role in terms of the overall presence of undocumented and illegal migrants in the EU. As Frontex note, the biggest entry route for those migrants who currently reside illegally in the EU has been international airports, with most of those having entered in possession of valid travel documents and a visa that has since expired.

Of those that did cross Europe’s external border without the necessary documentation, only a small proportion of them have actually entered via the maritime border, and many of them used routes other than the one through Lampedusa. The rest have traversed land borders. Nevertheless, the island remains top of the list of spending priorities for Frontex and this disproportionate level of attention becomes even more striking when one considers that the vast majority of the migrants passing through Lampedusa are genuine refugees.

If this was not enough, then travelling through the countless small-ports scattered along the southern Sicilian coast, one very quickly realises that migrants not only arrive at Lampedusa. Arrivals in these other ports are not only frequent, but have been happening for decades. What differs between those landing at other ports and those at Lampedusa is simply the level of media and political visibility. This underlines what many stakeholders on the ground already know to be true: that it is simply impossible to patrol such a vast maritime border so long as there remain countless ways to cross the Sicilian Channel and no technologies available to prevent the practice.

Note: This article gives the views of the author, and not the position of EUROPP – European Politics and Policy, nor of the London School of Economics. Featured image credit: MOAS / Darrin Zammit Lupi