The United Kingdom Independence Party (UKIP) received over 12 per cent of the vote in the UK’s general election. Given the role that the issue of immigration played in the party’s campaign, Juta Kawalerowicz assesses whether there is evidence that UKIP support is channelled by local concerns over an influx of immigrants. She shows that the UKIP vote is not actually driven by experience of change in local areas, but is instead correlated with the perception of levels of immigration.

The renewed interested in the connection between immigration and electoral politics can be traced to the spectacular rise of UKIP. Even though the party secured just one seat in the 2015 general election, its anti-immigration rhetoric resonated strongly among certain sections of Britain’s electorate – UKIP polled just under 13 per cent of the vote and came second in 120 out of 624 contested seats. Although the party originally focused around Conservative Euroscepticism rather than immigration, relative to supporters of other parties UKIP sympathisers are much more likely to see immigration as the single most important issue facing the country (see figure 1). Aside from party rhetoric, exemplified by Nigel Farage asserting that parts of Britain were becoming like a ‘foreign land’, is there evidence that UKIP support is channelled by local concerns about the influx of immigrants? 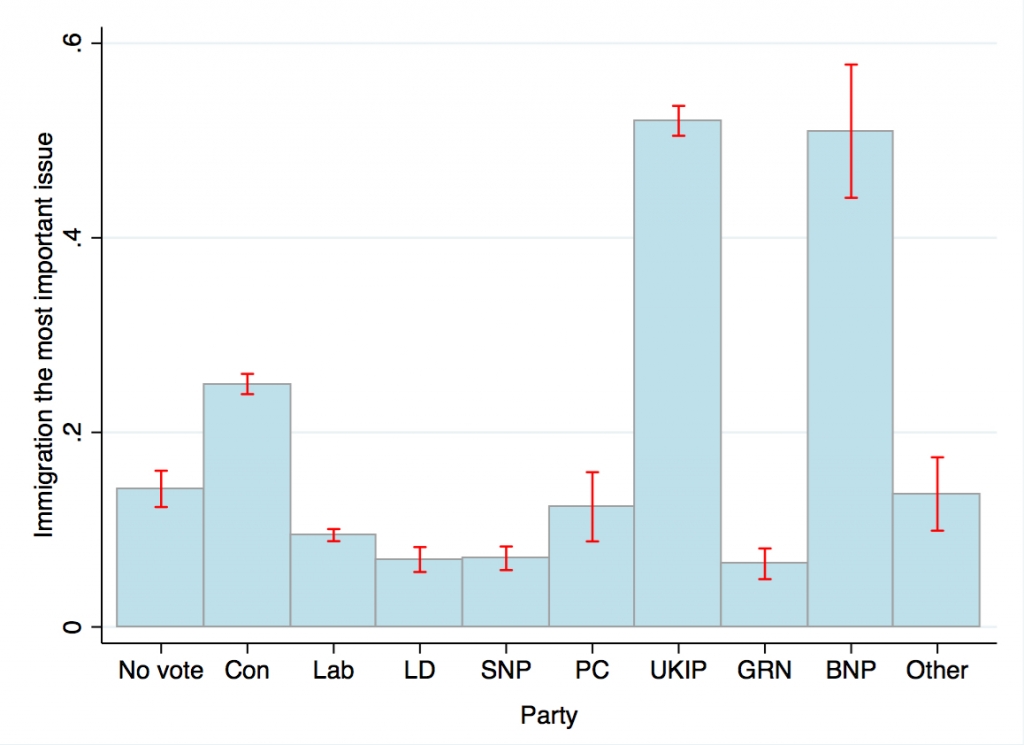 To answer this question, I focus on people’s reaction to increases in the share of immigrants between 2001 and 2011, which can be extracted from Census small area statistics and constituency boundary files.[1] As it is not clear which groups the respondents mean when answering questions about immigration (see this report for a discussion of public perception of immigrants), I divide this category into three non-overlapping ‘immigrant’ groups: white foreign-born, non-white UK born and non-white foreign-born.

This distinction allows me to examine whether UKIP supporters are really mobilised by the arrival of EU8 migrants from Eastern Europe or whether UKIP support is higher in constituencies with increasing proportions of second and third generation British-born ethnic minorities. (Analysis of British Attitude Survey 2013 shows that while being born in the UK is ranked as the most important factor when considering whether someone should be considered as ‘truly British’, the percentage of people saying that ancestry is very important reaches nearly 60 per cent among those aged 65 and above.) The increase in the share of each of these groups between 2001 and 2011 is shown in figure 2. 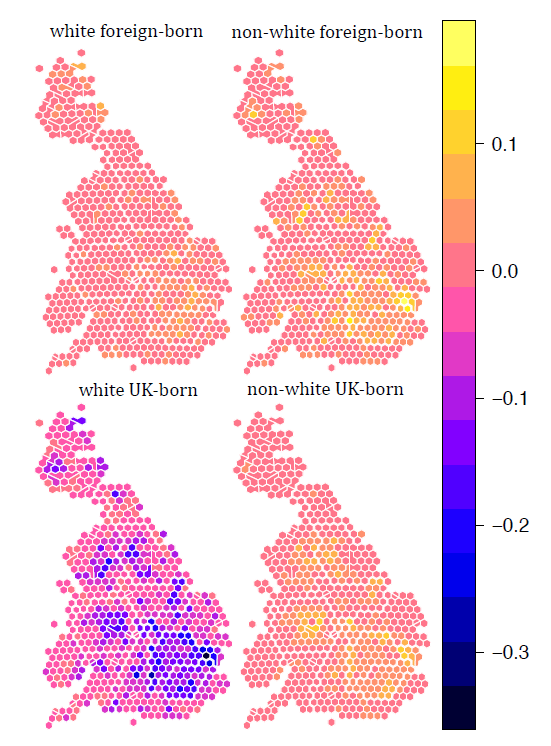 Firstly, we see a relative decrease of the white UK born group, especially in inner London, which generated a lot of interest in connection to alleged ‘white flight’. At the same time, during this period London attracted all ‘immigrant’ groups, with greatest increases among ‘non-white foreign-born’. Another pattern deserving attention is the difference in the extent to which these changes in the share of these three ‘immigrant’ groups cluster, with white increases in the share of foreign-born most evenly distributed.[2]

Table: Correlation between increase in immigration by group and UKIP vote/perception of levels of immigration

Interestingly, what seems to be correlated with the UKIP vote is the perception of levels of immigration (Spearman correlation 0.54). In three waves of the British Election Study available for 2014, respondents were asked whether they think that immigration levels are getting higher or lower (with answers recorded on a five point ordered scale where 1 stood for “getting much lower” and 5 “getting much higher”). It is known that people tend to overestimate the share of immigrants (for instance an Ipsos 2014 report shows that British respondents think that 31 per cent of the population consists of foreign-born respondents, while the figure is closer to 13 per cent according to the 2011 Census); here we also show that people’s estimations of levels of immigration do not correspond to actual change in their local areas, it is the perception that seems to be linked with the anti-immigration vote. 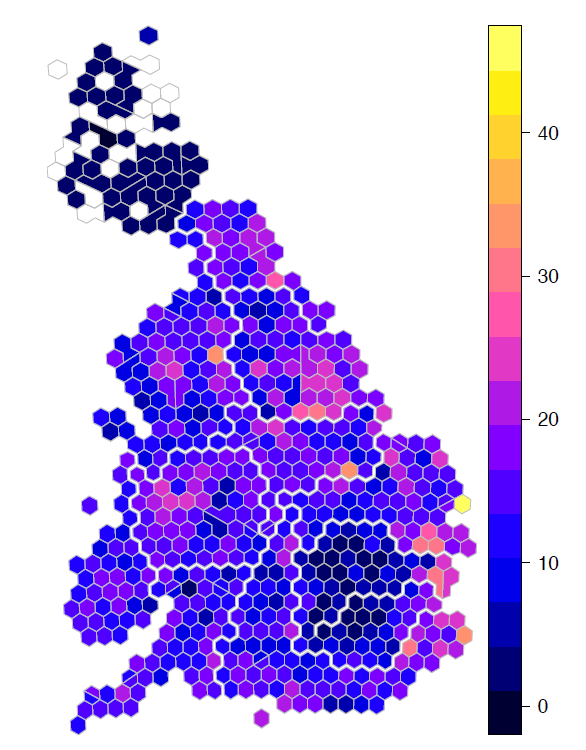 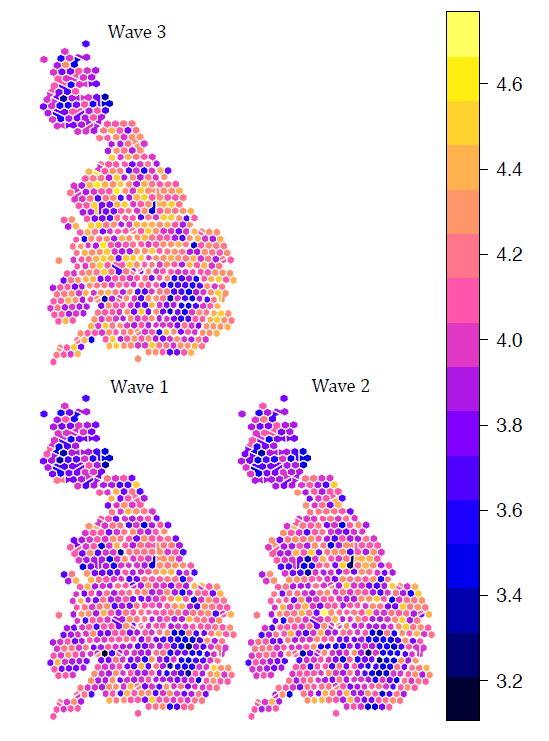 What emerges is that with each wave respondents thought that levels of immigration were getting higher: a situation unlikely to arise in a relatively short period of three months between each wave. In addition, even though respondents’ perceptions are devolved from real ethnic change, it seems that people start paying more attention to immigration in their local area in the months leading up to elections – for all three groups the Spearman correlation is higher for wave 3 carried out in September-October 2014 than in wave 1 in February-March the same year.

This offers some support to Hopkins’ politicised places hypothesis, which says that in communities which are undergoing demographic changes at the time when salient national rhetoric politicises immigration, immigrants can quickly become the targets of local political hostility.

[1] The question of change rather than absolute levels of immigration has rarely been addressed at a small geographic scales; this is because of changing electoral boundaries, making direct comparison difficult. Here, I used GIS (rgeos and sp packages in R) to calculate 2001 statistics within 2011 electoral boundaries. 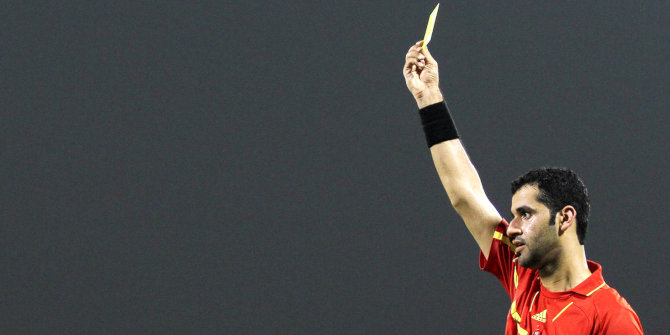 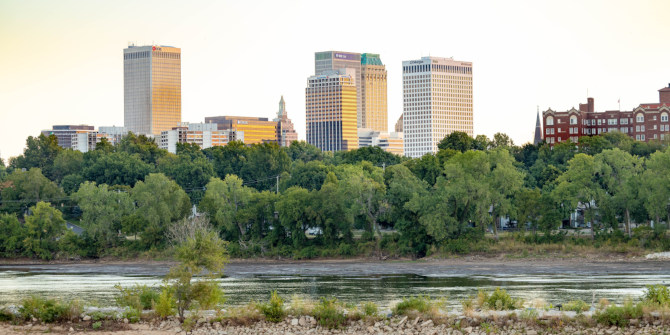 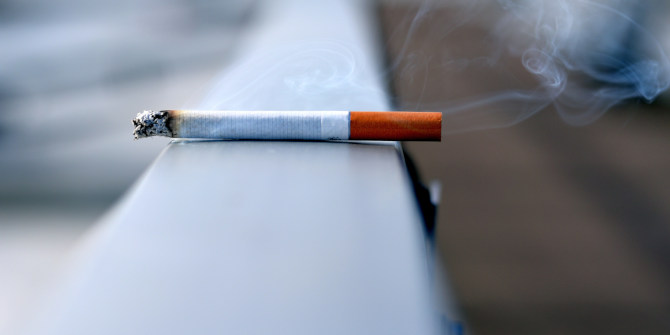