How important is the issue of European integration to national election campaigns? Roman Senninger and Markus Wagner write that while the EU previously played only a very small role in national elections, the onset of the Eurozone crisis has resulted in the issue becoming more prominent in campaigns in several countries. However, using an analysis of party press releases in Austria, they illustrate that parties still differ greatly in how they address the issue, with parties exhibiting a tendency to talk past each other rather than genuinely engaging with the subject.

For a long time, most political parties in Europe have tended to avoid discussing the EU during national election campaigns. However, recently this has changed, with research showing that parties have increasingly made EU issues a central topic of debate and disagreement in elections. The Eurozone crisis and the subsequent bail-out packages and reforms have meant that the EU has finally entered the limelight of domestic politics.

The key question in understanding the role of the EU in national politics is no longer whether parties talk about the EU (and why they often fail to do so). Instead, it is more useful to ask how parties mobilise on European Union issues in national elections. Are parties engaged in real debate and discussion about the EU, or are they simply talking past each other? This question in turn has two key dimensions: first, which parties and actors within parties talk about the European Union? Second, what kinds of EU-related issues are discussed and how are they framed?

Everybody is talking: parties and within-party actors

First, parties should differ in how much they are likely to talk about EU issues. Arguably, Eurosceptic parties and government parties should talk about the EU most. Eurosceptic parties hold what is often the most popular position on the topic, so talking about the EU could potentially increase their popular support. In contrast, parties in government may not be able to avoid talking about the EU as they will be called on to react to EU policies.

Based on all press releases sent out by political parties during the 2008 and 2013 national election campaigns in Austria, we have conducted an analysis which illustrates that almost all parties addressed the European Union to a similar degree. Most strikingly, we did not find that the Eurosceptic and radical-right Freedom Party (FPÖ) talked about the EU to a much greater extent than its rivals, even though it is the party with the strongest issue-based incentives to address the EU. Figure 1 shows that the Freedom Party sent out roughly as many EU-related press releases as the two government parties (the Social Democrats and Austrian People’s Party). 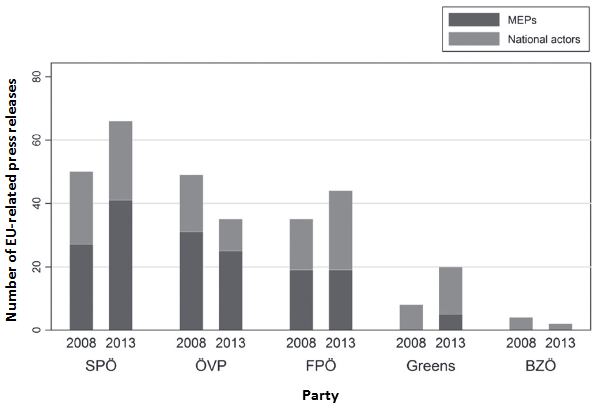 Note: Total number of press releases from political parties: 1,605 in 2008, 1,792 in 2013; total number of EU-related press releases: 146 in 2008, 167 in 2013. Political parties are: Social Democratic Party of Austria (SPÖ), Freedom Party of Austria (FPÖ), Austrian People’s Party (ÖVP), The Greens – The Green Alternative, Alliance for the Future of Austria (BZÖ). For more information see the authors’ recent article in the Journal of Common Market Studies.

Which actors within parties talk about the EU? We find that the three largest parties make strong use of their MEPs during national election campaigns. Parties actively delegate EU issues to their MEPs. In contrast, national actors are only selectively mobilised in the campaign. This also holds for the Eurosceptic and radical-right FPÖ, which was least expected to integrate their MEPs in campaign communication. The fact that MEPs play this role during national campaigns suggests a growing Europeanisation of domestic politics.

Content matters: the types of issues parties address and their framing

While parties therefore resemble each other in terms of who talks about the EU, they differ in terms of how they talk about the EU. Figure 2 illustrates that the pattern of press releases from the SPÖ and the ÖVP has much greater spikes over time than that of the FPÖ. A closer look at the issues addressed shows that the two parties in government were largely reacting to external EU-related events, such as the armed conflict in Georgia during the 2008 election campaign. In contrast, the radical-right FPÖ paid relatively consistent attention to the EU throughout the campaign and addressed a broad range of EU issues. This is true even in periods when the two large parties failed to pay attention to EU topics. 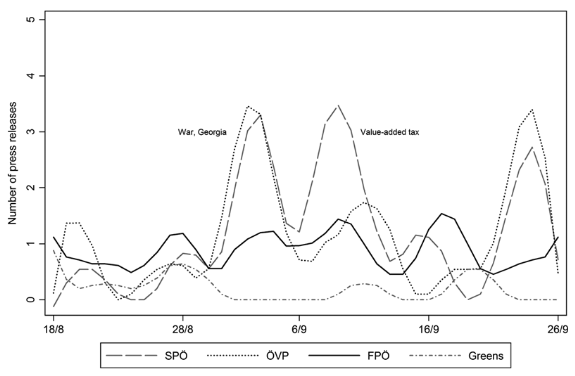 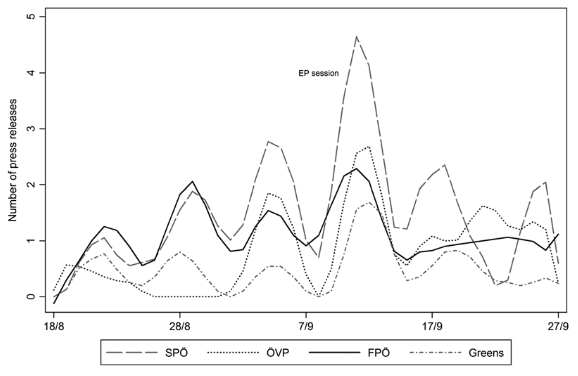 Note: For more information see the authors’ recent article in the Journal of Common Market Studies.

In terms of issue types we expected the Eurosceptic Freedom Party to talk more than other parties about general EU issues, such as whether it supports the general direction of EU integration and its institutional structure. In contrast, government parties should address the EU in reaction to external events and EU policies.

Both patterns are supported by our results. Figure 3 shows that more than 50 per cent of press releases from the two parties in government cover EU policies. The FPÖ talks more about general EU integration topics (27 per cent) than the other parties. (EU-related topics are those that involve the EU in an indirect, externally initiated way, such as the conflict in Georgia or the EU compatibility of national policies.) 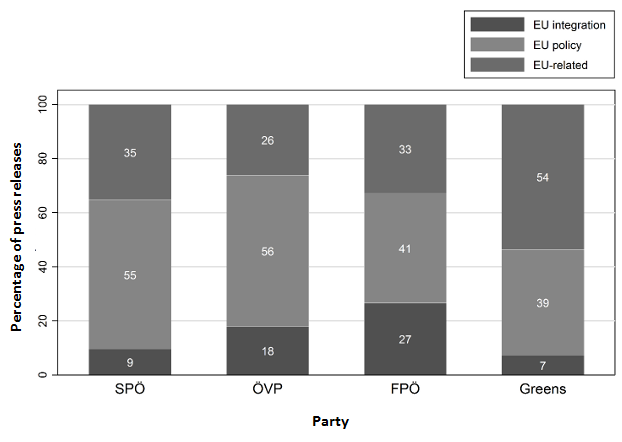 The differences in the frames parties apply are starker. Framing implies that there are various ways EU issues can be discussed. Hence, parties may differ in the aspects of European integration that they address during an election campaign. Recent research has identified three main EU issue frames: cultural frames, economic frames and other utilitarian frames. Our expectation is that parties emphasise those EU issue frames that match their overall ideological focus. Figures 4 and 5 present the results for general and specific frames applied by parties during both campaign periods. 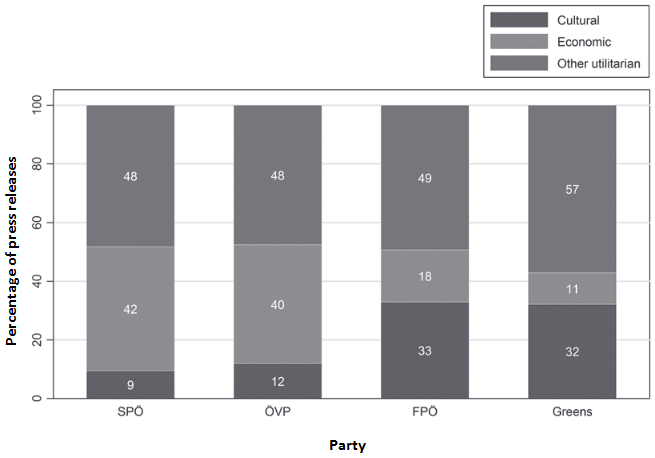 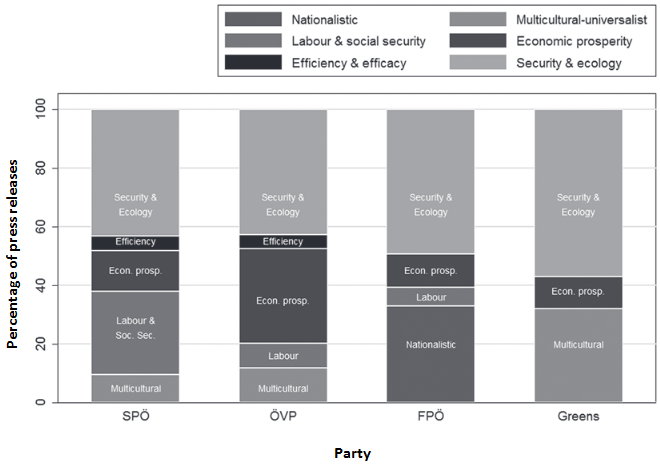 The results match our predictions very closely. Most clearly, the FPÖ strongly frames EU issues in ‘nationalist’ terms: 33 per cent of its press releases match that frame. Both government parties strongly frame their press releases in economic terms. When we turn to specific frames we can see the expected differences between the two coalition parties: while the social-democratic SPÖ stresses labour and social security, the conservative ÖVP addresses economic prosperity frames. Finally, the Greens mostly pay attention to multicultural-universalist as well as ecological aspects of European integration.

The main parties in Austria talk about the European Union in their campaign communication to a very similar extent, and it is no longer the Eurosceptics who stand alone in addressing the European Union in national election campaigns. Recent developments at the EU level, most notably the Eurozone crisis, have made the EU a salient topic in domestic politics. A closer look at the types of issues and frames applied, however, suggests that parties approach the EU in very different ways. Hence, while the topic has entered party competition at the national level, parties hold diverse opinions about which aspects of European integration matter.

This involves the danger of parties talking past each other as they are addressing the EU in fundamentally different ways. However, at least parties are engaging in debates about Europe, and this might in the longer term lead to more in-depth and informed discussion about European integration.

Note: For more information on this topic see the authors’ recent article in the Journal of Common Market Studies. This article gives the views of the authors, and not the position of EUROPP – European Politics and Policy, nor of the London School of Economics.