A large number of independent regulatory agencies, which are detached from the electoral cycle, have been set up by governments to ensure sound, stable and impartial policy enforcement. But has their independence actually made a difference? Outlining results from a recent study, Mattia Guidi assesses the impact national competition agencies (NCAs) have had on two relevant indicators, foreign direct investment and inflation, finding that there is no correlation at all between these indicators and the independence of NCAs.

In the last 30 years, and most notably during the 1990s, governments and parliaments in advanced economies have established a huge number of “independent” regulatory agencies. This wave of “agencification” has characterised not only economic regulation (central banks, stock markets, antitrust), but also several specific sectors (energy, telecommunications, pharmaceuticals) and what is usually called “social regulation” (food safety, environment).

Political scientists have thoroughly studied the (apparent) puzzle of politicians delegating, rather than claiming, powers, establishing that the main reason for creating agencies is the need to gain credibility. Put simply, agencies detached from the electoral cycle do not have incentives to promise something and do the opposite, as politicians seeking votes often do. By conducting stable, credible, impartial policy enforcement, these agencies therefore have the capacity to make society better off.

Surprisingly enough, while a lot of research has been done on the reasons for establishing independent agencies, there has been very little on the consequences of regulatory independence. In other words, does independence improve policy enforcement? This question is interesting for two reasons.

First, it is interesting from the perspective of establishing whether the theory matches reality. Every time a new agency is established, its creators almost automatically point out the benefits of independence, but are they right to do so? Second, it is interesting because we tend to neglect the implications that the creation of agencies has for democracy. Every time the implementation of a policy is delegated from the government to an agency that politicians cannot properly control, voters ultimately lose control over the implementation of that policy. So, delegation of powers is justified in as much as it makes voters better off, compared to more “politicised” solutions.

In a recent study, I seek to answer this question by investigating the case of competition policy enforcement in EU Member States. Competition policy – which is aimed at preventing abuses of market power or forms of collusion between undertakings – is one of the most supranational EU policies, with a full EU competence both in policy-making and in implementation, firmly in the hands of the Commission.

At the same time, the Commission shares enforcement powers with national competition agencies (NCAs), which are empowered to enforce EU competition policy. NCAs’ formal independence from their respective governments, however, varies greatly (see Figure 1). This is a very suitable case for testing the impact of independence, because we have the same EU policy enforced by agencies with very different institutional features: differences in their regulatory outcomes are most unlikely to be due to differences in the legislation, and should instead point to different regulatory capabilities and practices. 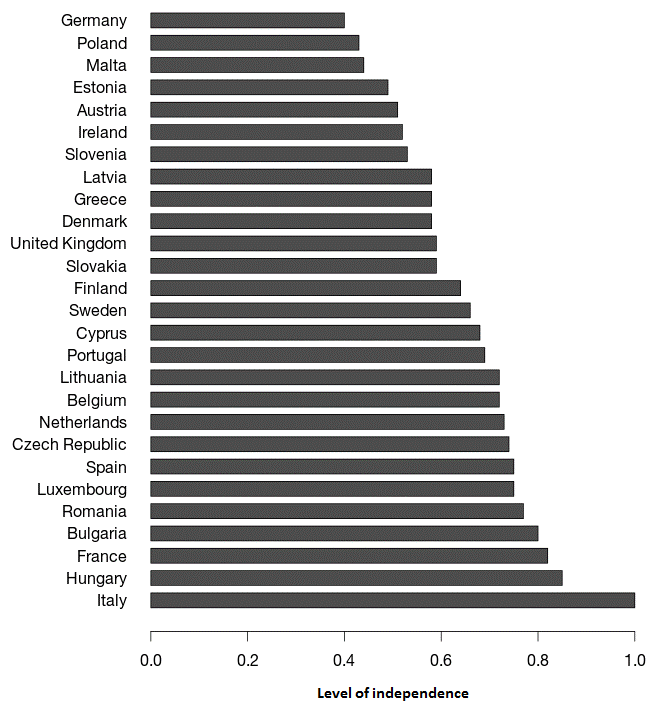 Note: Independence is measured on an index between 0 (no independence) and 1 (maximum independence). See the author’s longer article for more details.

I measure formal independence by creating an index out of 34 different indicators. The independence index comprises features like the length of appointment of the members of the agency, the possibility of renewal and dismissal, incompatibilities, rules of internal organisation, rules of procedure, formal obligations vis-à-vis government and parliament, and so on (see the longer article for more details).

These features were collected for all the EU member states as of 2009 (thus excluding Croatia), from 1993 to 2009. In this way it is also possible to test the impact of the accession to the EU or of euro membership. As we can see from Figure 2, there has been a general increase in average formal independence over time, caused both by the establishment of competition agencies in countries where no agency was present and by the increasing independence that has been granted in several cases to already existing NCAs. 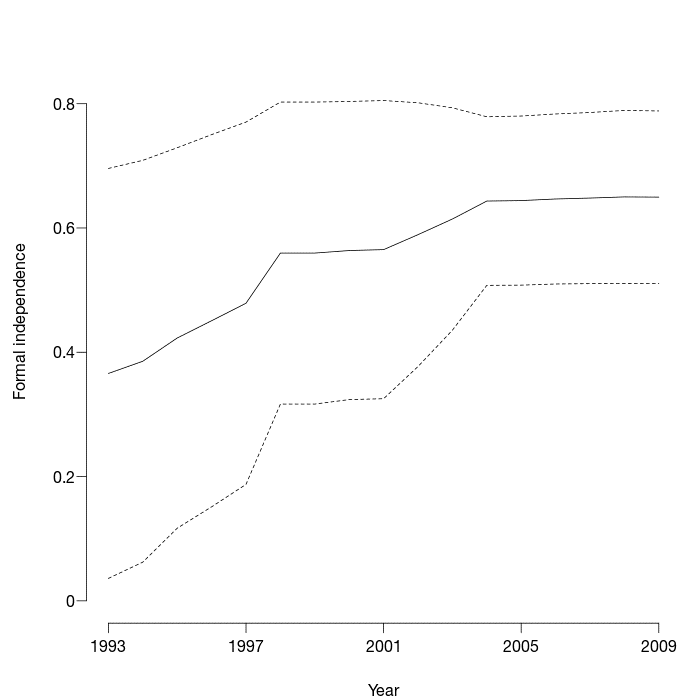 To carry out this test, I analyse if independence has an impact on two indicators: foreign direct investment (FDI) and inflation (measured by the consumer price index). With the FDI we can measure the international investors’ confidence that their investment will not be disfavoured at a future date. Consistency through time is one of the main benefits that an independent agency should grant.

Inflation, on the other hand, is an indicator of how many restrictions of competition (abuses of dominant position, cartels) there are in an economy. While governments might be tempted to cover some anti-competitive practices for electoral reasons, an independent NCA should not. An independent NCA should discourage companies from engaging in practices that keep prices artificially high.

What are the results of my empirical analysis? In brief, it appears that NCAs’ independence as such has no significant impact either on FDI or on inflation, even after controlling for a wide range of economic and institutional indicators. The “credibility effect” hypothesised by scholars and invoked by policy-makers does not seem to exist in this field.

The sceptical reader might conclude that independence matters, but it does so in a way that is not captured by my empirical analysis. For instance, it might be that actual rather than formal independence matters: it would be the agencies’ capacity to act independently (which depends on the political environment and on national bureaucratic traditions) that makes a difference, and not statutory rules giving, on paper, more or less leeway to competition agencies.

It could also be that independence has an impact on other indicators, or that the NCAs’ activities affect only a small number of firms – and therefore their impact cannot be detected by traditional economic indicators. However, even if these explanations were true, they would at best indicate that the power of independence has been greatly overestimated.

On the other hand, one must consider the possibility that independence per se does not matter in this field – and perhaps in others. More empirical research (in this and in other sectors) trying to establish a link between autonomy and performance should be welcome.

Obviously, this study does not purport to bring conclusive evidence on this issue. Yet, it points out that we should not take for granted that independence improves policy enforcement, and that we might need to start better assessing the (supposed) benefits of delegation with its costs.