Although Eurozone countries have returned to growth since the financial crisis, the pace of the recovery remains relatively slow and fragile, as underlined in recent economic forecasts by the IMF and OECD. Xavier Timbeau writes that in the current economic climate Europe should view the transition to a zero carbon economy as a key investment opportunity. He notes that while developing a strategy for reducing emissions and boosting the European economy is far from straightforward, the costs would be worth paying in order to avoid sinking into a long period of stagnation.

What the downward revisions of various forecasts (IMF, OECD, OFCE) presented in early autumn 2015 tell us about the Eurozone is not very comforting. A recovery is underway, but it is both sluggish and fragile. The unemployment rate in the Eurozone is still very high (almost 11 per cent of the labour force in the second quarter), and a sluggish recovery means such a slow fall (0.6 points per year) that it will take more than seven years to return to 2007 levels. 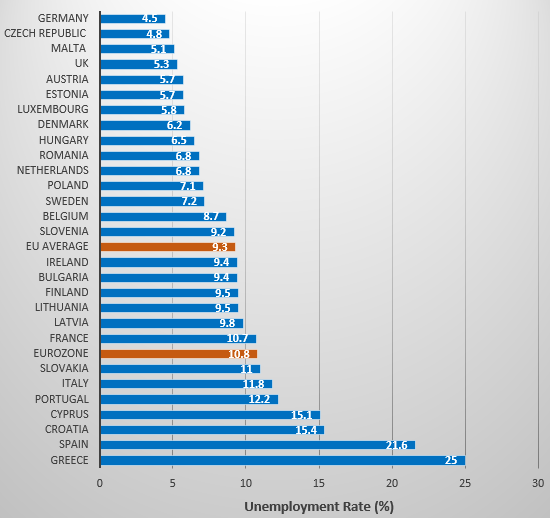 Note: Figures are the latest seasonally adjusted figures released by Eurostat for September 2015 – excepting the UK and Greece (figures from July) and Estonia and Hungary (figures from August).

Meanwhile, the European Central Bank’s unconventional monetary policy is having difficulty re-anchoring inflation expectations. The announcement of quantitative easing in early 2015 pushed up the 5-year/5-year forward inflation rate, but since July 2015 the soufflé has collapsed once again and medium-term expectations are 0.8 per cent per year, below the ECB target (2 per cent per year). Underlying inflation has settled in at a low level (0.9 per cent per year), and there is a high risk that the Eurozone will be frozen in a state of low inflation or deflation, strangely resembling what Japan has experienced from the mid-1990s to today.

Low inflation is not good news because it is triggered by high unemployment and slowly rising nominal wages. The result is real wages growing more slowly than productivity. Little or no inflation means both real interest rates that remain high, which increases the burden of debt and paralyses investment, but also an unconventional monetary policy that undermines the ability to measure risks and which gradually loses its credibility for maintaining price stability, i.e. to keep inflation within declared targets.

At the Jackson Hole Symposium in August 2014, Mario Draghi announced that, in the face of persistent unemployment, monetary policy cannot do everything. Structural reforms are necessary. But a demand policy is also needed. Not having one means running the risk of secular stagnation, as was formulated by Hansen in the late 1930s and recently brought up to date by Larry Summers.

Europe does not, however, lack investment opportunities. The COP21 commitments, though timid, assume a reduction in CO2 emissions (equivalent) per capita from 9 tons to 6 tons within 15 years, and investment will need to pick up pace in a big way if the change in global temperature is not to exceed 2°C. This means aiming to put an end to the use of petroleum and coal (or the large-scale development of carbon capture and storage) within 35 years. Achieving this will require investment on a massive scale, which is estimated in the European Commission’s Energy Road Map at over 260 billion euros (nearly 2 per cent of GDP) per year by 2050.

The social profitability of such investments is substantial (since it helps to avoid climate catastrophe and makes it possible to meet the EU’s commitments to the world’s other countries), but – and this is the problem posed by our sluggish recovery – their private profitability is low, and uncertainty about future demand together with poor coordination could give pause to the ‘animal spirits’ of our entrepreneurs.

Secular stagnation results from the very low profitability of investments, particularly after taking into account the real rates anticipated and the risk of a more serious depression. To avoid this trap, the social returns on investment in a zero carbon economy need to become evident to all, and in particular they need to coincide with private returns. There are numerous tools that can do this. We can use carbon pricing and markets for trading in emission rights; we can use a carbon tax; we can develop certificates for new investments (assuming we know how to ensure that they reduce CO2 emissions compared to an opposing counterfactual) or impose standards (if these are followed).

The difficulties of the transition and the acceptance of a relatively painful change in prices can be eased by compensatory measures, which have a budgetary cost (see Chapter 4 of the IAGS 2015 report) but are part of the stimulation package. It might also be desirable to draw on monetary policy to amplify the stimulus: see a recent proposal by Michel Aglietta and Etienne Spain.

The implementation of artillery like this to reduce emissions and boost the European economy is not straightforward and would require wrenching the institutional framework. But that’s the price to pay in order to avoid sinking into a long period of stagnation which, with the inequalities and impoverishment that it would generate, would certainly break up the European project.

Note: This article originally appeared at the blog of the OFCE. It gives the views of the author, not the position of EUROPP – European Politics and Policy, nor of the London School of Economics.

Despite attention focusing on Juncker’s new Commission, the European Council will remain the real centre of EU decision-making