The International Olympic Committee (IOC) charter casts the Olympics as apolitical, banning propaganda and protest. What does it mean, then, to locate the games in a state that has recently codified the discrimination of its citizens? In the summer before the 2014 Sochi Olympics, Vladimir Putin signed a bill banning ‘propaganda of nontraditional sexual relations’, understood to mean giving information about homosexuality to children. Prospective readers unaware that the Sexual Diversity and the Sochi 2014 Olympics: No More Rainbows was published February 2014 (the month the Games took place) might expect an exposition of the Games. Rather, this book is about implications: the implications of laws, and the implications of an international body such as the IOC meeting with a state – Russia.

Hosting the Olympic Games means spotlighting one’s country. The invitation to compare states and their citizens’ respective lots does not stop at number of medals won. The run up to Sochi 2014 was fraught with debate about what it means to compete in a country with discriminatory laws and whether the Olympics should be held there at all. Helen Jefferson Lenskyj does not rest lazily on essentialist representations of Russia as macho and homophobic. Explicit in the book is counsel that readers from ‘western democracies’ do not stare thunderstruck at Russia’s 2013 ‘anti-gay’ laws but rather reflect on the prevalence of homophobic laws closer to home. Here, Lenskyj refers to Margaret Thatcher’s government’s 1987 Section 28 (p.6) and relatively recent movements in parts of Canada (where Lenskyj is based) to prevent the discussion of homosexuality in schools.

However, Lenskyj’s main strategy against essentialising Russia is making it ‘Putin’s Russia’. This acknowledges the work of activists and allies in Russia who oppose homophobia. It is here that readers are presented with the first of two provocative dyads coursing through the book: ‘Putin’s Russia’ and the International Olympic Committee (as well as ‘The Olympic industry’ p. 101). They are, to use Lenskyj’s usually quite pedestrian but in this context rather damning term, ‘well matched’. Being well matched does not mean that they are the same on all fronts of course. Lenskyj’s argument, which is given a bullet-pointed urgency on the final page of this relatively short volume, is rather that Putin’s Russia and the IOC possess ‘common characteristics, most notably in the way each wields power’ (p.102). These attributes include ‘evidence of systemic sexism, heterosexism and homophobia’, ‘ambitions to expand global power’ and a ‘“Sport-as-special” argument used for self-serving ends’ (p.102).

These resemblances are enabled in particular by the contention that the IOC resembles a state (p. 102). It is in this vein that, although not explicitly acknowledged, a second complicated dyad emerges in No More Rainbows: sexuality and nationality.

Sport and homophobia are not only linked by the Olympics but by ideas about bodies – particularly their observation and control. Lenskyj adds colour to Chapter Two, ‘Russia: Sex, Demographics and LGBT activism’ by calling upon Michele Rivkin-Fish’s and Jarrett Zigon’s respective anthropological works on pro-natalism (p.15) and HIV (p.25) in Russia. Such additions will please readers who miss empirical research in a book centred upon legal and media analyses. 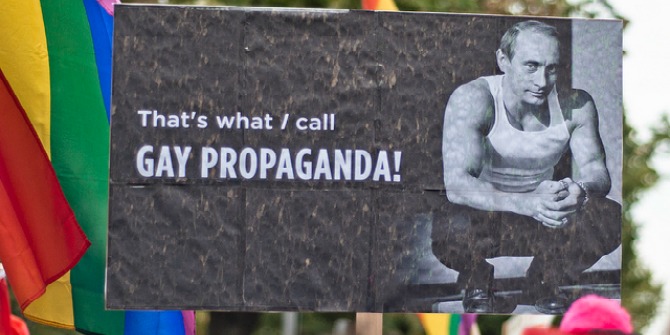 Chapter Three moves away from historical background on Russia. Evoking Lenskyj’s previous work on gender and sport, it discusses professional sport’s amenability to narrow understandings of femininity and masculinity. Lenskyj positions this as a cause of heteronormativity. ‘LGBT invisibility’ (p. 45) in sport is self-perpetuating. There is much to dissuade gay and lesbian sportspeople from coming out prior to retirement: loss of ‘popularity and sponsorships’ (p. 45) and even ‘fears of physical violence from other players (p.45).

According to Lenskyj, men in sport suffer (as do those in societies where sport is a dominant discourse) because ‘Except for a few sports that focus on aesthetic component – figure skating, for example, – male athletes of all sexual orientation are generally assumed to be heterosexual’ (p.43). Not entered into in depth in No More Rainbows, historically, to be a professional sportswoman at all is to subvert acceptable ‘heterosexual womanhood’ (p. 43). Sponsorship deals and positive press coverage that make up no small part of sportspeople’s income seem to be particularly based upon physical appearances in the case of female competitors. Here, Lenskyj’s use throughout her book of the term ‘the Olympic industry’ is particularly resonant. However, as Twitter abuse against 2013 Wimbledon champion Marion Bartoli testifies, sexism and the fetishisation of ‘feminine’ good looks are not the preserve of sportswear companies (p.44).

‘To boycott or not to boycott Sochi 2014?’ begins a section of Chapter Four. Lenskyj divides politicians’ and sportspeople’s reasons for overwhelmingly choosing the latter into four tropes. The list includes foreseeable rationale such as a boycott being ‘unfair to the athletes’ (p. 77). A point of departure and key argument in the book is ‘Point 4’: ‘magical thinking’ (p. 78). This category’s two prongs make for stimulating comparison. ‘Part A’ is ‘Belief in the redemptive power of sport…[that] the Olympics “unite the world and break down barriers”’. ‘Part B’ is ‘Sport as LGBT proving ground…athletes will win medals, defy stereotypes and prove themselves to be “good” “normal” citizens’.

Absent from the book is Sochi (the town) itself. To be fair, the book’s blurb states that the text is about the ‘implications’ of certain set of laws rather than a field study. However, a brief discussion of the town’s specificities would be in line with two particularly convincing facets of Lenskyj’s approach: firstly, that laws should be contextualized historically; secondly, that Russia is heterogenous. ‘Sochi’ ought to appear in the index to this remarkably thorough book. It would have fitted nicely between ‘soccer’ and ‘social justice’.

Note: This article was originally posted at our sister site, the LSE Review of Books, and it gives the views of the author, and not the position of EUROPP – European Politics and Policy, nor of the London School of Economics.

Siobhan Magee is a Postdoctoral Research Fellow at the Institute for Advanced Studies in the Humanities, University of Edinburgh. Whilst carrying out fieldwork in Poland, Siobhan wrote ethnographically about the 2010 ‘EuroPride’ march in Warsaw. Having written a PhD thesis about the meanings and uses of fur in Poland, her current research explores diasporic family businesses and material culture.