Under the EU’s Common Fisheries Policy, quotas are set on the amount of fish that can be caught by member states. Griffin Carpenter discusses the latest negotiations over fishing quotas for 2016. He states that with seven out of ten quotas set above the level dictated by scientific advice, progress on increasing the sustainability of European fish stocks is now at risk.

Overfishing has long been an intractable problem in Europe. Decades of high fishing pressure has depleted stocks to low levels and fishers and coastal communities have suffered as a result. Recently, however, the tide seems to be turning. Many fish stocks that were at low levels are now growing in size. Since the EU began recording data on stock limits in 2003 there has been a gradual but consistent increase in the number of stocks at sustainable levels. Measures to increase the sustainability of fish stocks in Europe appear to finally be paying off. Beyond the number of fish, profits are steadily increasing too – although there is a clear divide between large and small scale fleets.

Yet barriers to successfully tackling the problem of overfishing remain. Each year, fishing quotas (formally named ‘Total Allowable Catches’) are set during controversial, closed-door negotiations between EU ministers. While ministers walk into these negotiations with scientific advice on sustainable catch levels in hand, by the time they exit the negotiations, most quotas have been set above advice, and some by large margins. This scientific advice is provided by the International Council for the Exploration of the Sea at the request of the EU, specifically so that the quota level that would lead to overfishing can be identified.

One of the primary reasons for this practice is that many ministers want to be seen as having negotiated a ‘good deal’ for their fishing fleet by raising quota limits for the fish their nation catches. With the lack of transparency surrounding the Council meeting, we don’t know who says what, but we can see what the outcomes of these negotiations reveal.

Last year, a report I co-authored set out to analyse fishing quotas set from 2001 to 2015, and compared them to the corresponding scientific advice. Some clear trends in the data emerged. First, the amount by which fishing quotas have exceeded scientific advice has declined over the period. Second, some Member States consistently exit negotiations with much larger amounts of fishing quotas set above scientific advice than others. This is because different quotas effect different Member States and some are set above advice while others are not. Spain, Portugal and the Netherlands top the list by the percentage increase, while Denmark and the UK top the list by the amount of tonnes fished above advice (as larger fishing nations). 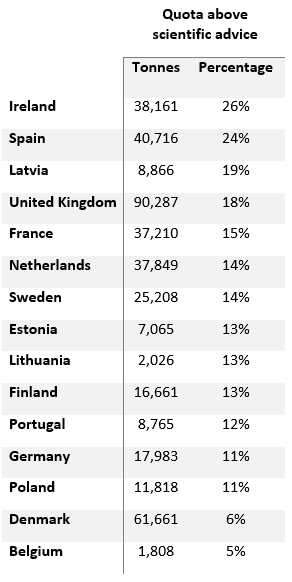 Source: NEF’s ‘Landing the blame’ database for all 2016 TACs

The European Commission has also analysed the decisions and concluded that 36 fish stocks have quotas that will be fished in line with maximum sustainable yield in 2016. This is the same number of stocks as 2015, despite the reformed Common Fisheries Policy stating that all stocks should be fished sustainably ‘by 2015 where possible and, on a progressive, incremental basis at the latest by 2020 for all stocks’. This calculation for 2016 also assumes that quota limits are strictly enforced by EU Member States.

Member States that are pushing for higher quotas may be seeking a short term victory, but they are only delaying the ecological and economic benefits that come from sustainable fishing. This clear message of fishery management contrasts sharply with the lack of transparency in which quota negotiations are conducted. To bring overfishing in Europe to an end, so too must the practice of setting fishing quotas above scientific advice.

Note: For a longer discussion of this topic, please see the author’s recent briefings on fishing quotas set for the deep sea, Baltic Sea, and the Northeast Atlantic. This article gives the views of the author, and not the position of EUROPP – European Politics and Policy, nor of the London School of Economics. Featured image credit: Thomas Hawk (CC-BY-SA-2.0)