Slovakia will hold a general election on 5 March, with the ruling SMER-SD party, led by Prime Minister Robert Fico, looking to maintain its majority in the Slovakian parliament. Katarina Lezova previews the election and assesses the main parties looking to mount a challenge to SMER-SD. She states that while the ruling party is unlikely to win another majority, it should still have enough support to be able to enter into a coalition with a smaller party and stay in power.

On 5 March, Slovak citizens will decide who will be elected to the National Council of the Slovak Republic and how the political power will be distributed among the parliament’s 150 MPs. In order to get a seat in the Slovak Parliament parties need to get over a 5 per cent threshold and no less than 23 parties will be trying to get support from the country’s voters.

The current government, led by Prime Minister Robert Fico’s SMER-SD (Direction-Social Democracy) party, has been in power since Slovakia’s last parliamentary election in 2012. This was the first time that one party was able to win a majority in the Slovak Parliament and build a government on its own. However, while the party has managed to keep its popularity, it seems highly unlikely that this scenario will be repeated after the upcoming elections.

There are currently five other parties represented in parliament alongside SMER-SD: the Christian Democratic Movement (KDH), Ordinary People (OĽaNO), Most-Hid (meaning ‘bridge’), the Slovak Democratic and Christian Union – Democratic Party (SDKÚ-DS), and Freedom and Solidarity (SaS). Recent election polls suggest that seven or eight parties might be able to get into the parliament, with SMER-SD remaining the largest party.

Fico has nevertheless been rather careful in his political statements and has emphasised that he is prepared to build a coalition – if voters give his party enough votes – with ‘standard’ political parties. From his perspective, a coalition of two parties could therefore be possible. The ‘standard’ parties would be those with history and experience of the political scene such as the Slovak National Party (SNS), Most-HiD or the KDH.

In the 2012 elections, the Slovak National Party failed to gain enough votes to be represented in parliament. Following this result, the party’s controversial leader, Ján Slota, left and Andrej Danko was chosen to lead the party. This has helped the party’s popularity and recent polls show it is likely to get into parliament on this occasion. Meanwhile Most-HiD, one of the three existing ethnic Hungarian parties in Slovakia, is aiming for a higher percentage than in the last elections when it received only 6.9 per cent.

Elsewhere, support for the SDKÚ-DS, formerly led by Mikuláš Dzurinda, who has twice served as Prime Minister, has been gradually decreasing. While this right wing party enjoyed a particularly strong position during the period of Vladimir Mečiar, who was Prime Minister on three separate occasions in the 1990s, it lost a large proportion of its voters after the last elections, which resulted in the loss of more than half of its seats in the parliament. None of the recent polls indicate that the party will cross the electoral threshold required for representation.

Figure: Average voting intention figures in opinion polls ahead of the 2016 Slovakian election 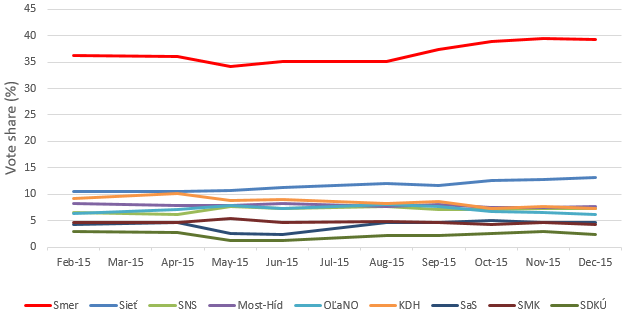 Note: Figures are an average from the Polis and Focus polling agencies.

Other parties with the potential to pass the electoral threshold include OĽaNO, the SaS, and a new party, ‘Network’ (SIEŤ) which has a centrist orientation and was only founded in June 2014. Its leader, Radoslav Procházka, was previously a member of the Christian Democratic Movement and in 2014 he was also a candidate in the Slovak presidential elections (he came third and therefore didn’t make the second round). The party has tried to establish itself as the main opposition party. Interestingly, half of the first ten candidates on SIEŤ’s election list are women. However, the Slovak opposition remains highly fragmented and there is no one large party that would be able to unite most of the right wing voters, as used to be the case between 1998 and 2006.

One factor of relevance for the rest of Europe is that on 1 July Slovakia will take over the Presidency of the Council of the European Union. This will be a significant step in Slovakia’s role within the EU. The newly elected government will have increased political responsibilities which will reflect on Slovakia as a whole and impact on its reputation. The migrant crisis has also been an extremely important issue domestically in Slovakia, but the fact that all major parties are united in rejecting the proposed EU quota system for relocating refugees ensures that it won’t impact on voters’ preferences substantially. However, parties nevertheless have differing opinions toward the issue of Slovakia filling a law suit against the EU over the quota system.

Outside of European issues, healthcare and education sector reforms remain the key issues in the election, as was shown during recent public protests by teachers and nurses. In previous elections, Slovak-Hungarian relations and the ethnic Hungarian question were also important topics. This was particularly discussed around the time of Kosovo’s independence, however, at the moment the ethnic issue is largely off the political agenda. The ethnic Hungarian party Most-Hid has been quite successful in opening up to Slovak voters by emphasising cooperation between ethnic Slovaks and ethnic Hungarians in the country. This is contrary to its rival, the Party of the Hungarian Community (SMK-MKP), which has pursued a different approach.

Finally, although SMER-SD has had a solid lead over the last year (as shown in the Figure above), only a few weeks before the elections, a poll carried out by the agency AKO showed that about half of respondents were still unsure about how they will vote. This gives parties a lot of potential to persuade voters that their programme and vision is worth backing. However, it is unlikely there will be too many surprises in the result and if SMER-SD keeps its voters it could be able to build a coalition with another party. Alternatively, the opposition parties, which are likely to be led by SIEŤ or Most-Hid, could bring the centre and right-wing parties back to the parliament.

Note: This article gives the views of the author, and not the position of EUROPP – European Politics and Policy, nor of the London School of Economics. Featured image credit: Daniel Antal (CC-BY-SA-2.0) 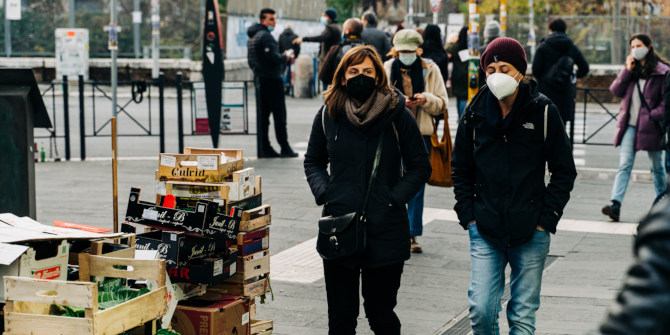