Most would probably agree that there’s a lot of disagreement in American politics right now. As always Democrats and Republicans disagree heatedly about every policy area under the sun — taxes, entitlements, national security, health care, immigration, energy, trade, etc. The parties themselves have also become riven with internal disagreement, with Tea Party Republicans revolting against and ousting their Congressional leadership, and Bernie Sanders supporters fighting Hillary Clinton’s Democratic Presidential nomination every step of the way. Less obvious to the average citizen is that disagreement also reaches down deep into the bowels of every-day government. There, armies of career bureaucrats fight with each other and with politicians about how best to promote economic growth, educate children, ensure public safety, and protect clean air and water.

What’s striking about all this disagreement, however, is how much of it isn’t about “goals” — that is, what government should by trying to achieve. Rather, it’s often about “beliefs” over how the world works, and what that means for how people can best pursue shared goals. For example, your beliefs about whether criminals are mainly opportunistic or mentally ill affects whether you think prisons should focus on punishment or rehabilitation to effectively reduce crime. Politicians as diverse in their political stripes as Barack Obama and Ronald Reagan have argued that political conflicts are often not about disagreement over goals, but about “legitimate differences of opinion” (Reagan) about “the best way to achieve our goals” (Obama), like how to “reduce government costs… increase productivity, and… restore our defense capability” (Reagan).

Does it matter whether people disagree because they have different beliefs about how best to achieve shared goals, rather than different goals? For generations of both political practitioners and social scientists, the answer has mostly been no — different people want to do different things, and it doesn’t really matter why. And like the old joke about a starving economist on a desert island who “assumes a can opener,” economists and political scientists who have developed mathematical models to study politics usually assume outright that belief disagreements can’t even exist (since rational people who’ve shared their information “ought” to agree!)

But common sense and real-world experience suggests that whether people in politics disagree about goals or beliefs does matter. A new theoretical study about how political organizations can cope with these disagreements tries to disentangle why. 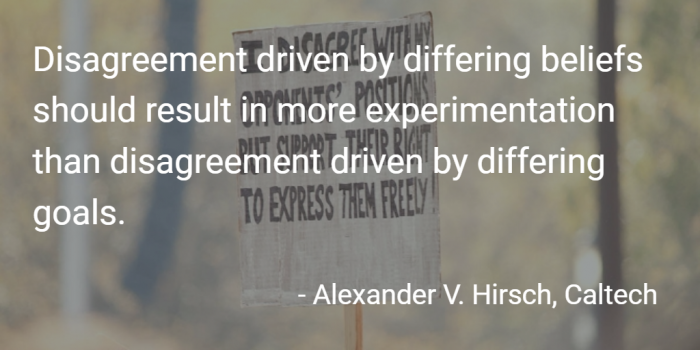 The basic idea of my study is that what makes “beliefs” different from “goals” is that beliefs — at least in theory — ought to be able to change with new information. Anyone who has gotten in a political argument probably knows that it’s hard to change someone else’s beliefs with rhetoric or the latest research. What can be effective, however, is letting people experiment — actually try stuff out, see what works and what doesn’t, and learn from it. This obviously isn’t possible in lots of areas of politics — the stakes are too high (fighting wars), the outcomes are too difficult to measure (protecting civil rights), or the situation is changing too fast (containing financial crises). But in many other areas — like fighting crime, regulating pollutants, educating children, or waging political campaigns — experimentation is not only possible, but increasingly common. What this means is that it’s these areas of politics where we should expect to see the differences between belief and goal conflicts emerge.

What might those differences be? My work suggests that we should look for two things. First, disagreement driven by differing beliefs should result in more experimentation than disagreement driven by differing goals. For one, experimentation has the potential to resolve the former but not latter. In addition, experimenting when people have different goals can create perverse incentives for them to “sabotage” things because they are intrinsically opposed to (rather than merely skeptical of) change.

The second difference we should look for is more “bottom up experimentation” with belief disagreement, or experimentation driven by the people charged with actually implementing change. If bureaucrats at the Environmental Protection Agency think we should control pollutants with a market-based permit system, even a very liberal Congress should let them try it out. If a new police chief wants to try body cameras to improve community relations, even a skeptical mayor should give them a free hand. Why is this? First, people are always more motivated to implement change that they “believe in.” Second, people are more easily persuaded that they are wrong when actually given the chance to try out their ideas and see them fail first-hand.

Of course, this can backfire; letting people fail in order to persuade them to see things your way may not work, and do damage in the process. For example, many speculated that former Speaker of the House John Boehner was strategizing like this when he let Tea Party Republicans shut down the government, trying to prove to them the futility of doing so. And today we have an ever-more emboldened Tea Party caucus and a new Speaker of the House in the form of Paul Ryan (R-WI). Maybe this suggests that Republican intra-party fights are actually driven more by different goals (getting re-elected in districts with very different constituents) rather than how to achieve shared goals (actually getting government to cut spending). Or maybe the strategy of persuading through failure itself failed, but was nevertheless worth a shot!

Note:  This article is based on the paper, ‘Experimentation and Persuasion in Political Organizations’, in American Political Science Review and originally appeared at our sister site, USAPP – American Politics and Policy. The article gives the views of the author, not the position of EUROPP – European Politics and Policy, nor of the London School of Economics. Featured image credit: 21sacraments (Flickr, CC-BY-2.0)

Alexander V. Hirsch – Caltech
Alexander Hirsch is a Professor of Political Science at the Division of Humanities and Social Sciences at Caltech. He studies political institutions using game theory and quantitative methods. His main focus is on American political institutions. In particular, he’s interested in how a learning-by-doing approach affects the efficacy of policy for legislative organization and bureaucratic management. He is also studying legislative specialization and organization, the effect of lobbying on forming legislative coalitions, and deterrence in international conflicts.