The Scottish Government has indicated that it may call a second independence referendum as a result of the UK’s decision to leave the EU. Richard Rose writes that the SNP are already establishing the foundations for a new independence campaign and Scotland’s First Minister, Nicola Sturgeon, may quickly propose legislation for another referendum once the UK triggers Article 50.

While Westminster politicians await the day next year when Theresa May will trigger Article 50, beginning a two year negotiation over the UK’s withdrawal from the European Union, the countdown is different in Scotland. The big question is when Nicola Sturgeon, Scotland’s First Minister, will announce a date for holding a second referendum on Scottish independence. This is a necessary first step to achieve the Scottish National Party’s twin goals of keeping Scotland in the EU and making it an independent state.

The timing of an independence referendum depends on two conditions. First, the SNP leader needs a good reason to call another vote so soon after Scots rejected independence by a 55 to 45 per cent margin in September 2014. Secondly, Sturgeon needs to believe that a new referendum will lead to a majority for independence.

The first justification for another referendum is that leaving the European Union is a major change for Scotland’s position in the world. As of today, there is an inconsistency between the majority of Scots voting to stay in the UK while 62 per cent voted to remain in the EU. If nothing is done, by 2020 Scotland will be outside the EU as a necessary condition of remaining part of the UK.

The prospect offered by the ‘double remainers’, who would like Scotland to remain in both the UK and the EU, is a unicorn vision. The EU does not allow devolved governments to be members, and it is doubly unthinkable that it would give membership to a devolved body that is not even part of a member state.

Last month Theresa May and Nicola Sturgeon agreed to have further consultations about what Brexit would mean for devolved governments. This satisfies both because it can lead to opposite conclusions. At the Chequers Cabinet meeting on Brexit at the end of August, the Prime Minister assured her Cabinet colleagues that no devolved government would be allowed to delay the invocation of Article 50.

After losing the previous referendum, the cautious SNP leader does not want to call a second ballot until she has grounds for expecting victory. Since July, Scottish opinion polls have averaged 47 per cent of Scots against independence and 42 per cent in favour if a referendum were held now. The undecided are numerous enough to tip the result either way and the SNP is now starting to campaign to change the poll figures.

The party’s members are canvassing what two million Scots think of the idea of another independence referendum. This target number is equivalent to the number of votes cast against independence in 2014. This target is realistic because the SNP now has one member for every 33 registered Scottish voters. The First Minister plans to announce the results of the canvassing operation on 30 November, St. Andrews Day.

The timing of the next step in Scotland will depend on when Theresa May formally notifies the EU that it wants to withdraw, by triggering Article 50. Whereas expert opinion favours doing so in autumn 2017, ministers in charge of negotiating Brexit would like negotiations to begin in January or February. This is also the expressed wish of the President of the European Commission and the European Parliament’s chief negotiator with the UK.

As soon as negotiations to leave the EU start, Sturgeon can announce that further consultations with the UK government have failed to protect Scotland’s interests, and that a second independence referendum is justified. A referendum bill will quickly be enacted by the Edinburgh Parliament and Westminster will lack grounds to oppose it, given its acceptance before the 2014 vote of Scotland’s right to withdraw from the United Kingdom. Besides, the Prime Minister will have bigger problems to deal with on both sides of a very English Channel.

If Downing Street delays triggering Brexit until autumn 2017, Sturgeon will have an additional six months to mobilise support for the SNP’s cause. This would allow more time for the Conservative government to hit a mid-term slump. It would also allow more time for the fissiparous Labour Party, the historic bulwark of support for Scotland to be governed from Westminster, to show Scots that the only alternative to having a Tory government supported by one-fifth of Scots is to have an SNP government in an independent Scotland.

By the time a Scottish independence referendum is held, the economic costs of Brexit may be visible and Theresa May’s honeymoon with the electorate will be over. Moreover, the problems of immigration and by-election risks may be around. The growing awareness of the compromises required to achieve any agreement with Brussels will reveal cracks in the facade of Cabinet unity.

No expert can predict what the outcome of an independence vote will be before the date is set. In the EU referendum, pre-campaign polls were misleadingly reassuring to the Remain campaign. Once the previous Scottish independence campaign began, the SNP campaign boosted the vote for independence by ten percentage points. Compared to the 2014 referendum outcome, the SNP needs a swing of five per cent to tilt the balance.

To call a second referendum the First Minister needs confidence that the case for independence can be successful in a contest with a divided and demoralised opposition. She may well choose to rephrase the slogan that brought victory to the Brexiteers: Let’s take back control of our nation.

Note: A version of this article originally appeared at UK in a Changing Europe. It gives the views of the author, and not the position of EUROPP – European Politics and Policy, nor of the London School of Economics. Featured image: England / Scotland border British Railways sign board by the east coast mainline, marking the border. Credits: Callum Black (CC BY-SA 2.0) 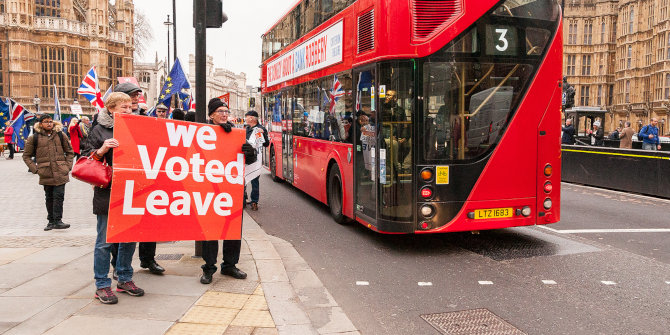 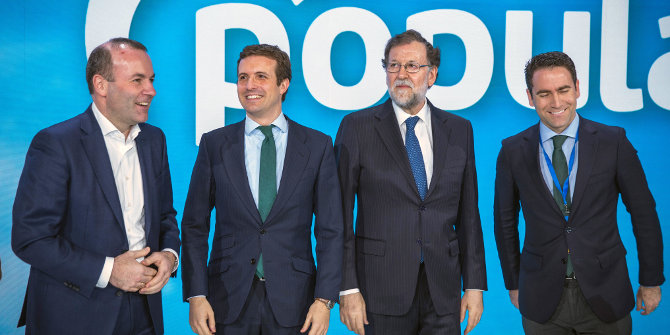