Already before Matteo Renzi had lost his constitutional referendum, media around the world claimed that a ‘government of technocrats’ was the most likely option to follow Renzi in case of electoral defeat. Drawing on their analysis of all technocratic governments appointed in 30 European democracies after 1977, Christopher Wratil and Giulia Pastorella estimate a rather low probability of 12-18% for the next Italian administration to be led by a technocrat. A technocratic government is therefore definitely possible but not as likely as suggested by the media.

On 24th of November, almost two weeks before Italy’s constitutional referendum, The Economist openly asked Italians to vote ‘no’ in the referendum in order to ‘cobble together a technocratic caretaker government’ – an administration largely made-up and led by non-partisan individuals with either business or public sector experience. After the referendum and Renzi’s defeat, global news outlets have been filled with the idea of a ‘technocratic government’ and many argue that it is the most likely option for the next Italian government (e.g. FT, NYT). But is it really likely considering what we know about the appointment of technocratic governments in general?

Here, we draw on research that we recently conducted, in which we investigate the factors that lead to the appointment of such governments. A government can be called technocrat-led if the prime minister is not a member of any political party nor has she/he held office for any political party before. Mario Monti, the former Italian prime minister, fulfilled these criteria and led Italy’s last technocratic government from 2011 to 2013 – in the midst of the euro crisis. In fact, we argue that technocrat-led governments are a very rare phenomenon that only occurs in times of severe political and economic crises, when parties are willing to concede the perks of the prime minister’s office in order to avoid being responsible, blamed, and electorally sanctioned for painful reforms and political mess. Analysing more than 400 governments that were appointed across 30 European democracies since 1977, we show that the probability of technocrat-led governments is strongly predicted by economic recession and previous political scandals, and to some extent by previous experience with technocratic governments. In addition, technocratic governments are more likely after cabinet dissolution during the legislative term than following a deadlock in government formation after ‘fresh’ elections.

How likely is it then that the Italian president Sergio Mattarella will appoint a technocrat as the next Italian prime minister? Let us first consider political scandals. Italy has not experienced any major political scandal during Renzi’s administration. This is especially true when comparing Renzi’s term to the 1990s when two other technocrat-led governments were appointed in Italy, Ciampi’s and Dini’s. In the days of “Bribesville” (Mani Pulite), Italian politics was a synonym for scandalous. On the other hand, considering the economy, Italy is clearly in dire times with -0.3 per cent real GDP contraction in 2014 and just 0.8 per cent growth in 2015. In fact, Italy’s economy is at best stagnating if not in a recession. Another factor that increases the probability of a technocratic government is the fact that only two partisan governments (Letta’s and Renzi’s) lie in between Monti’s government and the potential new government. Empirically, our data shows that technocratic governments tend to follow each other closely in time.

In total, our statistical model calibrated over the period 1977 to 2013 gives the new Italian government between 12-18% predicted probability of becoming technocrat-led, depending on how severe one assesses the economic situation to be. In addition, if we account for uncertainty in our prediction, a technocratic government may be as likely as 30%. Figure 1 shows for all 30 Italian cabinets since 1977 how likely technocratic governments were according to our model. This illustrates that it is about as likely that Renzi will be followed by a technocrat as it was back in 1993 that Amato I was to be followed by a technocrat, which – even though unlikely – indeed happened with Ciampi (who had a probability of about 13% to be a technocrat). Incidentally, Ciampi’s appointment likewise followed a referendum which, similarly to the one in question, clearly showed the will of the majority against the ruling political elite. 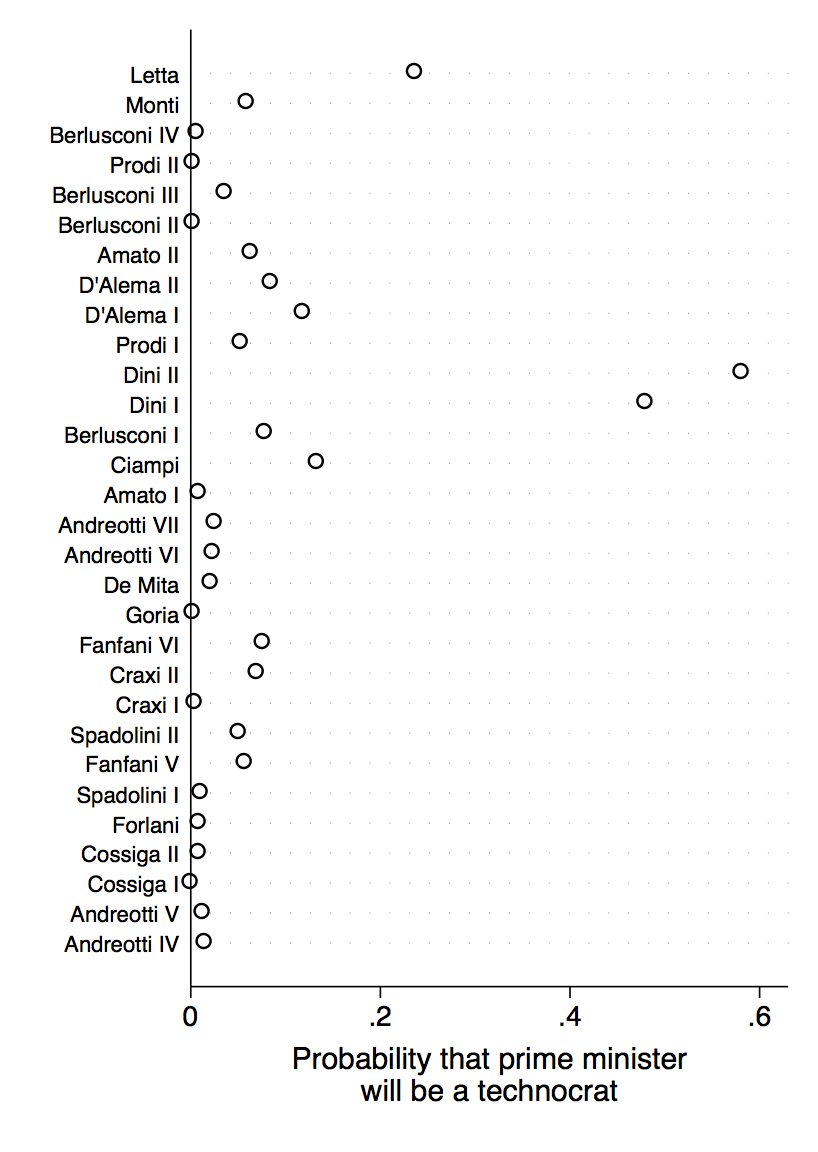 Predicting political outcomes is always a difficult and risky exercise for political scientists and politicians alike, and this situation is no exception. Mattarella has on his table several options other than a technocratic government, and another PD-led cabinet seems to be the most likely outcome. Yet, there are also additional variables peculiar to the current Italian situation which are undoubtedly playing a significant role in the decisions that are being taken in these very hours. To mention just one, Renzi’s proposed electoral law (the so-called Italicum) is yet to be confirmed as constitutionally legitimate, thus making early elections rather difficult to call rapidly.

Therefore, while our analysis of past instances and patterns of technocratic rule yields expectations that are rather ‘conservative’ with regard to the prospects of a technocrat-led government, in these times of repeated electoral and political surprises, a pinch of salt is always recommended.

Note: This article gives the views of the authors, and not the position of EUROPP – European Politics and Policy, nor of the London School of Economics. Featured image: public domain. Featured image via bresciaoggi.it.