On 15 December, Theresa May travelled to Brussels for a European Council meeting. Simon Usherwood writes that although Brexit was briefly discussed, the meeting highlighted the extent to which the rest of the EU have moved on from treating the UK as an equal partner, and that the flipside of taking back control from the EU is that the EU can now no longer be controlled by the UK.

European Council meetings are tricky events. As the pre-eminent political gathering of the EU’s heads of government and state, it is the place where many big decisions are made and alliances cemented. This has been particularly so in recent years, as the Union has faced crisis after crisis. At the same time, it is a strangely intimate setting, where friendships grow as evening debate stretches deep into the night.

Thursday’s European Council demonstrated these different logics well. The meeting – one of the first to have an earlier start to avoid a late finish – dealt with managing migration in the Mediterranean, security policy, efforts to support economic growth, Cypriot negotiation, the future relationship with Ukraine and the fighting in Syria. All of these are substantial and pressing issues for the EU, even if the conclusions reached did not provide much resolution.

Importantly, the question of the UK’s departure was not a big part of proceedings. Theresa May got a short slot to set out an update on the UK, which she used mainly to underline the need to provide prompt agreement on the status of UK nationals living in the rest of the EU, and EU nationals living in the UK. After her departure at the end of the European Council, the remaining 27 leaders had a brief informal meeting, to agree a short statement setting out the process for negotiating Article 50.

However, for many in the UK, the big splash was the footage of May looking short of people to talk with before the meeting began. For Leavers it was a sign of how unpleasant the EU is to those who turn against it, while for Remainers it was evidence of the costs in influence of cutting ties. It should be remembered that May has only attended one European Council prior to this, so a degree of awkwardness might be expected.

But May’s (and the UK’s) peripheral role in proceedings tells us something much more important than whether she is matey with her counterparts. One of the key logics of European integration is that member states are able to tackle issues together that they would struggle with by themselves. Everyone brings something to the table and – through a process of negotiation, compromise and deals – everyone gets something back.

When countries don’t play ball with this process, it’s usually for a very specific reason: domestic political pressure is the most common source. Other states understand that and work to try and accommodate it where they can, although not to the detriment of the overall system. For the state with the problem, the game is to work out how the specific issue weighs up against the other benefits that it derives from membership.

The UK is in a very different place. By announcing its intention to leave, it collapses the process: by offering nothing, it should now expect nothing in return. This manifested itself very clearly in three ways at the European Council. Firstly, the EU will spend as little time as possible on the matter of Brexit. As the conclusions highlight, there is more than enough to occupy minds in Brussels and national capitals, both domestically and internationally. Thus the scope for May to wrangle a deal with other leaders will be limited to the very end of the process.

Secondly, what focus the EU does have at present is limited to process. What debate there was on Thursday over the statement concerned the role of the European Parliament: it will have to approve any Article 50 deal, and so wants to be in the room when talks happen. The concession made was an invitation to preparatory meetings and regular briefings, which might suffice, although much will depend on who takes over the Parliament’s Presidency next month.

Thirdly, the EU continues to operate as before. Those informal greetings and chats are part and parcel of the process and if May didn’t get a look in, then it is because she is no longer part of that process. The flipside of taking back control for the UK from the EU is that the EU also doesn’t have to be controlled by the UK. Expect many more awkward moments in the months and years to come.

Leave a Reply to It doesn't add up... Cancel reply 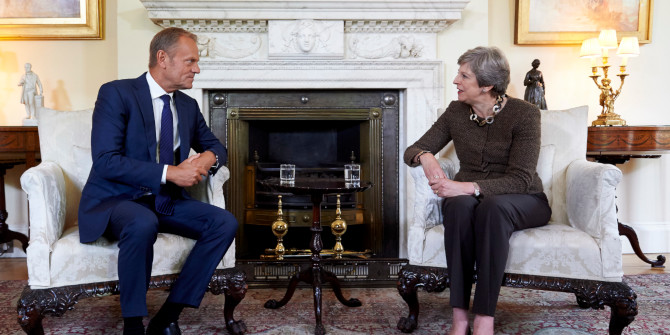