Russia’s ambassador to Turkey, Andrei Karlov, was shot dead on 19 December at an art gallery in Ankara. Dimitar Bechev states that although the incident was shocking, it is unlikely to disrupt the recent thawing of relations between the two countries. But the incident nevertheless shows Turkey in the worst possible light and will provide an opportunity for Russia to extract further concessions, particularly in relation to Syria.

Turbulent though they are, relations between Russia and Turkey are not that unpredictable. Yesterday’s shocking assassination of Andrei Karlov, Moscow’s ambassador in Ankara, proves the point. On the surface, it calls into question the recent rapprochement between the two countries. But in terms of substance, this is not the case in reality.

It is true that the newly found warmth doesn’t go very deep, at least as far as ordinary Turks are concerned. Large swathes of society have a grudge against Russia, no matter what diplomats or pundits have to say about the content of bilateral ties. The attacker, now identified as Mevlüt Mert Altıntaş, was screaming in Turkish and broken Arabic, to the top of his lungs, that he was about to take revenge for Aleppo before firing his pistol.

And his actions echoed the not-so-distant past: the 1996 hijacking of a ship at the Black Sea coastal town of Samsun by a group of Turks with links to the Northern Caucasus, or the hostage drama in 2001 in Istanbul’s upmarket Swissôtel. On both occasions, perpetrators intended to draw attention to the situation in Chechnya and protest against Turkey’s inaction. However, neither of those episodes did much to change Ankara’s official foreign policy, nor did they change in any way Russia’s attitude toward Turkey.

We could well argue that this time it is different: especially given the timing and the high-profile victim. This is correct. The assassination of an ambassador is hardly a light matter. Turkey, of all countries, knows that well. In October 1975, two of its ambassadors – in Austria and France – were gunned down by the Armenian Secret Army for the Liberation of Armenia (ASALA). However, there won’t be a fresh diplomatic rift between Russia and Turkey, let alone a showdown of the sort we witnessed after the downing of the Su-24 jet in November 2015.

Both countries rushed to describe the incident as a “provocation” meant to derail the newly blossoming spirit of co-operation. President Recep Tayyip Erdoğan and Vladimir Putin spoke on the phone and made public statements denouncing the act. The alleged Gülenist connection of the attacker could provide an excuse, just like in the Su-34 incident which is now pinned on rogue officers as part of the “parallel structure”. The foreign ministers of Russia, Iran and Turkey are meeting in Moscow to talk about Syria as planned. Keep calm and carry on, in other words. Which is, at some level, ironic insofar as Ambassador Karlov was one of the people advocating such a model for handling state-to-state affairs a year ago when they had hit rock bottom.

Russian-Turkish relations have essentially entered a new phase. Between 2011 and 2015 the two agreed to disagree on Syria and press ahead with profitable economic relations, particularly in the field of energy. After the restart this summer, the prevailing view is that good bilateral relations are a stepping stone to finding common ground vis-à-vis the Syrian war as well. Operation “Euphrates Shield” undertaken by Turkey and the Free Syrian Army developed with the tacit approval of Moscow.

Turkey, for its part, facilitated talks between the Russians and Syrian rebels that paved the way to the surrender of East Aleppo to Bashar al-Assad’s forces and the withdrawal of militiamen and civilians into opposition-controlled areas. It has also softened its talk on Assad and there’s a fair chance that contacts with Damascus have been partly restored. That is why Karlov’s murder is as much an embarrassment for Ankara as a symbolic blow against Russia, comparable to what the U.S. suffered in Benghazi in 2012.

This is not to say that such a gruesome and highly significant event will have negligible repercussions. It actually provides Putin with additional leverage vis-à-vis Erdoğan. No doubt, in public Russia will second whatever explanation the Turks produce to account for the attack. In private, however, there will be a price tag. Turkey will have to go the extra mile in accommodating Russia – most likely in Syria but potentially on other issues as well. Moscow has the higher ground and will undoubtedly milk the opportunity to the best of its abilities. This much is certain.

And however the Turkish government spins it, the assassination shows the country in the worst possible light: as weak, divided and vulnerable, unable to provide for the security of top officials in the heart of Ankara’s diplomatic quarter. It comes after bomb attacks by an offshoot of the PKK in Istanbul and Kayseri. What’s more, the authorities’ dual strategy of cutting deals with Russia while allowing a popular outpouring of indignation over Syria (e.g. the regular protests outside the Russian Consulate in Istanbul and the recent rally in solidarity with the people of Aleppo) appears to have backfired, in the most literal sense. Today’s Turkey is a far cry from the confident country that wanted to reshape the Middle East in its image at the time when the Arab Spring started – far less a power capable of playing hard ball with a neighbour such as Putin’s Russia, which will pull no punches.

Note: This article gives the views of the author, and not the position of EUROPP – European Politics and Policy, nor of the London School of Economics. Featured image credit: Kremlin.ru

Dimitar Bechev – University of North Carolina / Sofia University
Dimitar Bechev is a Research Fellow at the Center for Slavic, Eurasian and East European Studies in the University of North Carolina and Director of the Sofia-based European Policy Institute. He was formerly a Visiting Fellow at LSEE Research on South Eastern Europe (LSE European Institute) and Director of the Sofia Office at the European Council on Foreign Relations (ECFR) where he covered Turkey and the Western Balkans. 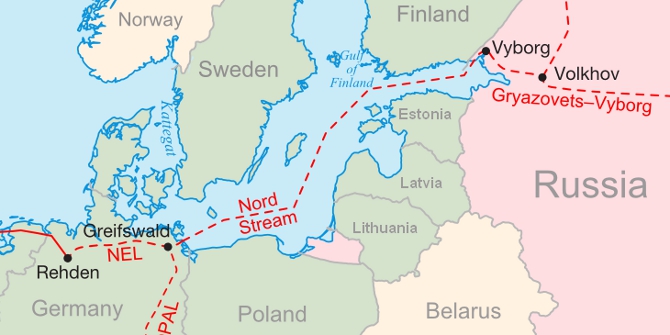