Marine Le Pen and Emmanuel Macron have advanced to the second round of the French presidential election, but which candidate will supporters of losing candidates such as François Fillon, Jean-Luc Mélenchon and Benoît Hamon back in the run-off vote? Using updated polling, Alexandre Afonso illustrates where the votes are likely to go, with Emmanuel Macron standing to benefit most from transfers.

What will vote transfers in the second round of the French presidential election look like? In a two-round majoritarian system such as the one used in France, vote transfers among candidates between the two rounds are a major determinant of victory. In short, what matters first and foremost is how many votes a candidate in the second round can source from eliminated candidates in the first round. This is fairly different from a majoritarian system such as that used in the UK, where the goal is simply to be the most popular candidate in a one-off vote.

In 2002, when Jean-Marie Le Pen (Marine’s father) made it to the second round for the Front National, he only marginally increased his vote share from the first round because he wasn’t able to draw on any substantial transfer of votes. He was defeated by Jacques Chirac with 82.2% of the vote, with voters of all other parties rallying behind Chirac. Figure 1 below shows how these vote transfers occurred.

Figure 1: Vote transfers in the second round of the 2002 French presidential election 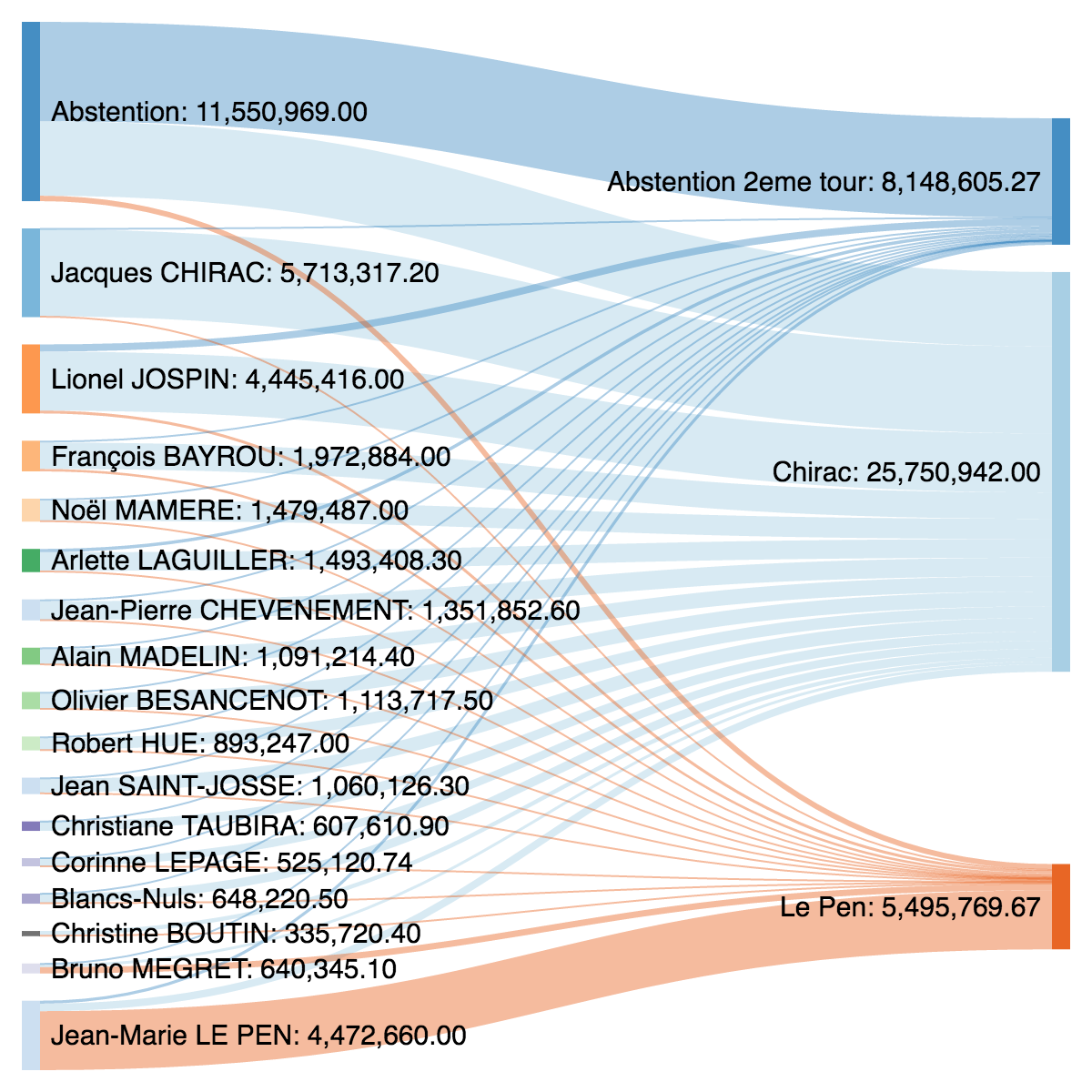 So how will things look this time around? Ipsos carried out a poll right after the first round results asking first round voters who they would vote for in the second round. I have taken the official results (97% of votes counted) published by the French Interior Ministry, and reallocated the votes for each candidate drawing on the numbers given by the Ipsos poll. The results are shown in Figure 2 below.

Figure 2: Potential vote transfers in the second round of the 2017 French presidential election 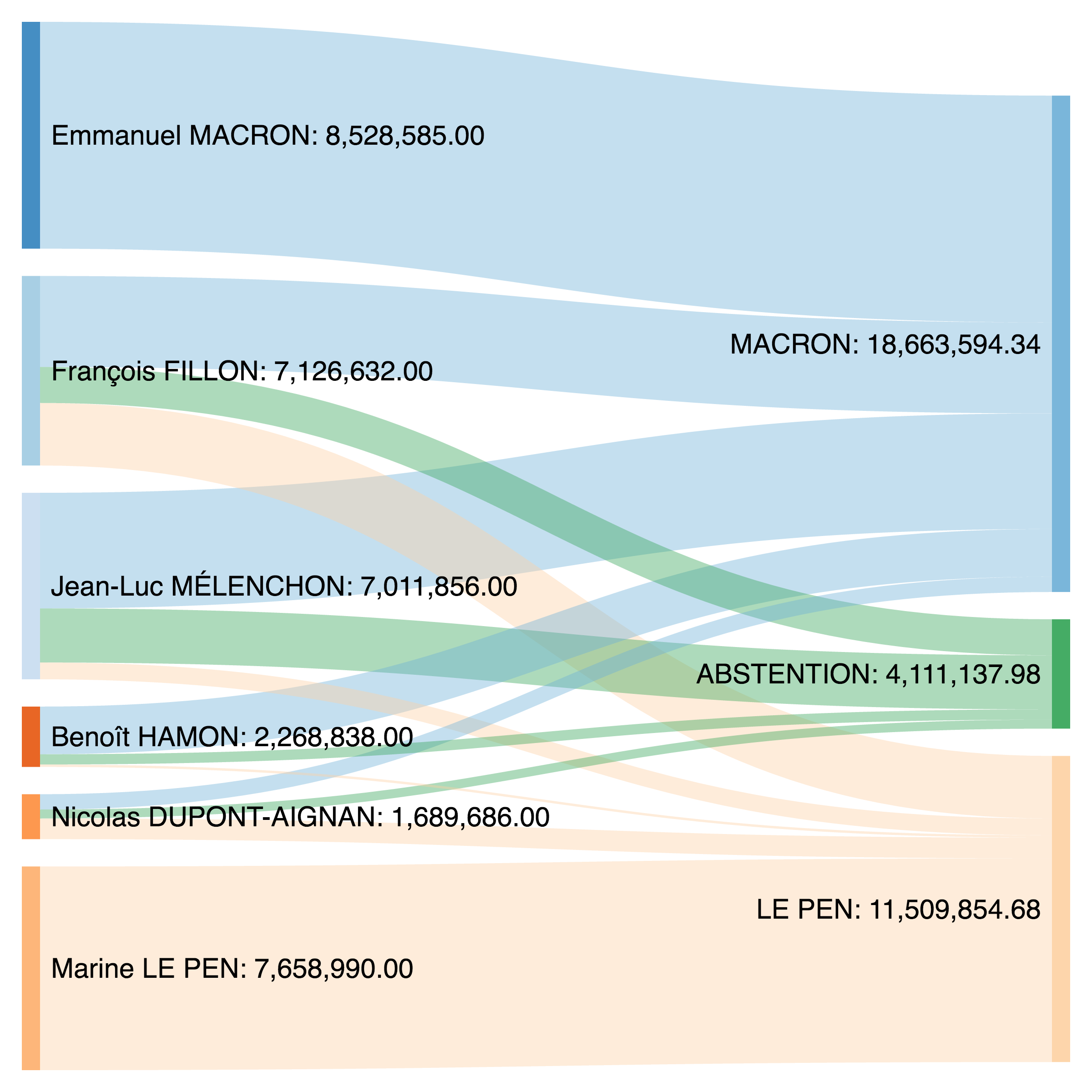 In line with second round polls that foresee a Macron victory, Macron would be the main beneficiary of vote transfers in the second round, especially after having benefitted from the endorsement of major political actors on the left and right (Fillon, Hamon, Juppé). Interestingly, Marine Le Pen could draw on some substantial vote transfers from François Fillon, in spite of him having endorsed Macron, but not much else, and surely not enough to beat Macron.

Now, this projection should be considered with some caveats because it relies on a number of – sometimes quite strong – assumptions. First, I assume that voters of a successful candidate in the first round will stick with them in the second one, and none of them switches or abstains. This is not totally realistic because in 2002, a non-negligible share of Le Pen first round voters switched to Chirac, perhaps wanting to give a warning in the first round but not feeling comofrtable with electing Le Pen as President in the second.

Second, abstentions in the first round are not factored in. In 2002, Chirac could draw on a large number of abstentionists in the first round who mobilised in the second to block Le Pen. Third, since people were given the opportunity not to express a preference, I assume that the people without a preference will abstain. This is not realistic and surely overestimates abstention, but the lack of preference surely signifies that there is no likable alternative for these voters.

In spite of these caveats, this gives an overview of how “likable” the two candidates are beyond their own electorate. Even if Le Pen voters have been the most convinced and determined throughout the campaign – notably with a larger share of voters saying that they wouldn’t switch their vote, and deciding earlier than for other candidates – she still displays too little appeal for voters beyond her core base to successfully convince a majority of the electorate to back her. Nevertheless, current polling still predicts she will double the score of her father fifteen years ago.

Note: This is an updated version of a blog post that appeared on Alexandre Afonso’s blog. The article gives the views of the author, and not the position of EUROPP – European Politics and Policy, nor of the London School of Economics.