Emmanuel Macron has a substantial lead in opinion polls ahead of the second round of the French presidential election. But could Marine Le Pen still gather enough support to claim victory on 7 May? Elise M. Dermineur outlines three circumstances that could damage Macron’s campaign, noting that while these are unlikely to see Le Pen win the election, they will be equally relevant for the upcoming French legislative elections in June.

There are only a few days until France elects its next President. While Emmanuel Macron qualified in pole position in the first round with around 24% of the vote, and while it seems he can expect a comfortable cushion when it comes to vote transfers, Marine Le Pen could still win if three elements come to the foreground. Such an outcome is highly improbable, but it is worth discussing as it highlights some interesting features of French politics which, if nothing else, are worth keeping in mind for the upcoming legislatives elections in June.

Three days before the first round, a man opened fire on a police squad on the Champs-Elysées, killing one and injuring two other policemen. Despite the symbolic nature and the significance of this attack, it is unlikely that it had any impact on voters in the first round. After Charlie Hebdo, Paris and Nice, the French people are sadly resilient to the threat of terrorist attacks. But if a major attack occurred before the second round, killing hundreds of people, the cards might be reshuffled.

It is uncertain whether a terrorist attack would change the face of the upcoming election. The impact of such terrible events on voters is difficult to quantify and impervious to neat correlations. Of the few examples that exist, the attacks in Madrid in March 2004, three days before a general election, offer one precedent. The disastrously mistaken Spanish government claim that ETA was responsible – when an al-Qaida inspired terrorist cell were the culprits – played a significant role in the final result. Would an attack in France give an advantage to Marine Le Pen? Or would it strengthen the front républicain in favour of Emmanuel Macron? It is impossible to say.

After the first round results were released, Macron gathered his team and joyfully celebrated his leading position in a Parisian restaurant. The very next day, newspapers did not hesitate to draw a parallel with Nicolas Sarkozy celebrating his own victory at the chic Fouquet’s restaurant in 2007. The “bling-bling” connotation was not well received by the public. Critics also pointed out that there was not much to rejoice for after all, since Marine Le Pen came first in about 19,000 villages or towns out of about 36,000 French municipalities.

Besides the unsuitability of opening expensive bottles of champagne, many also accused the leader of En Marche! of celebrating his final victory prematurely, well before the second round. The candidate had to defend himself, arguing “it was a heartfelt moment”. This ‘Fouquet’s syndrome’ nonetheless immediately seemed to cost him a couple of points of support, but most polls still put him at around 60%.

The beginning of his second-round campaign was also somewhat thorny. While visiting the Whirpool factory near his hometown of Amiens, which is going to move its production to Poland, Macron had the unpleasant surprise of running into Marine Le Pen there. While he was meeting with the union representatives in town, the Front National leader showed up unannounced at the factory gates. In front of a horde of photographers, she took selfies with the workers on strike, putting across the image of a woman of the people, promising to save jobs and fight against delocalisation in general. When Macron arrived, he was welcomed with boos and jeers. Supposedly, Le Pen had distributed whistles to the workers. He had a hell of a job being heard. He nonetheless managed to make his point, turning the situation to his advantage, and avoiding his opponent’s trap for the time being. But he certainly will have to tread carefully over the final moments of the campaign.

On the other hand, most observers point out that Marine Le Pen is conducting a more dynamic campaign than she did in the first round. She has managed to gather the support of the sovereigntist Nicolas Dupont-Aignan (who received 4.7% in the first round), cracking de facto for the first time the so-called front républicain. She is also trying to acquire the support of the far-left voters who cast their votes for Jean-Luc Mélenchon (who received almost 20% of support). The leader of La France Insoumise did not give voting instructions after the first round. Instead, he offered his sympathisers the choice of what to do through an online ballot. When the results were published, more than 65% indicated that they preferred abstention or submitting a blank vote: only 34.8% chose Macron. A recent poll indicated that 17% of Mélenchon voters will opt for Le Pen in the second round and what his voters ultimately choose to do will be key in the upcoming ballot.

For the past few months, newspapers and political observers have highlighted the work of the physicist Serge Galam. Galam successfully predicted Brexit and Trump’s election, thanks to his innovative mathematical model. In a recent paper, he argues that voter turnout could mean that Marine Le Pen wins the election. His theory of “differentiated abstention” shows that, despite 40-45% apparently intending to vote for the Front National candidate, an abstention level of about 42% would play in her favour and she would win with 50.7% of votes cast. He argues that most people who intend to vote for Le Pen will likely do it, while voters who say they will cast their vote for Macron are less certain to do so. This is what Galam called the “unconfessed abstention”.

Abstention, however, has never reached 40% in the second round of a presidential election in France. The lowest it has reached was 31% in 1969, and the conditions then were rather peculiar. President De Gaulle had resigned in 1968 and all the polls showed that his popular prime minister, Georges Pompidou, would easily defeat his opponent, Alain Poher. As a result, many voters did not take the trouble to vote in the second round. All other second rounds have seen a rate of participation of more or less 80%.

Figure: Turnout in the second round of French presidential elections since 1969 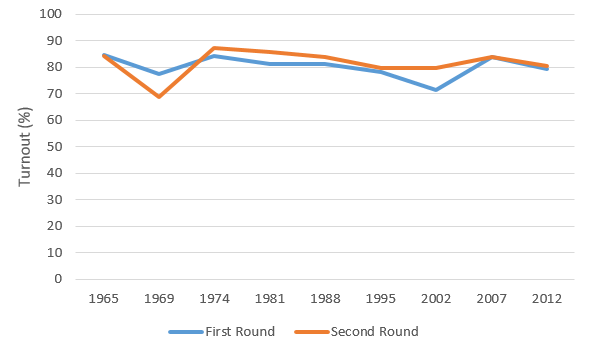 Each of these factors alone would not suffice to reverse voting intentions but an – albeit improbable – combination of the three would certainly change the face of the elections. These are certainly elements that must be kept in mind in light of the upcoming legislative elections in June.