With under two weeks left until the Austrian legislative election on 15 October, the centre-right People’s Party (ÖVP), led by Sebastian Kurz, currently leads the opinion polls. Michael Burri writes that the refugee-centred campaign of Kurz has resonated with the public, allowing the ÖVP to counter the economic message emphasised by incumbent Chancellor Christian Kern. And while an improving economy may have weakened anti-refugee politics since the peak of the refugee crisis in 2015, refugees still provide a powerful means through which to discuss national community and national destiny.

The surge of refugees seeking asylum in the European Union since 2015 has raised concerns in many countries about its potentially negative impact on national labour markets, economic growth, and future social spending. Such concerns have often resonated with voters and are credited with boosting the electoral fortunes of populist parties. But with refugee flows now greatly slowed, and economic indicators trending upward in much of the European Union, many wonder whether improved economic conditions will reduce the appeal of anti-refugee politics. The contest between the incumbent left of centre Chancellor Christian Kern (SPÖ) and the right of centre challenger Sebastian Kurz (ÖVP) in the 15 October Austrian election suggests that anti-refugee politics has the upper hand, but that a strengthening economy may be weakening its grip.

Robust economic growth in Austria is attracting attention. Year-on-year GDP rose in the first-half of 2017 at the strongest clip in six years. The Austrian National Bank is now forecasting a 2.7% rise in GDP for 2017, the kind of expansion that the Austrian economy has not seen since 2006-2007. Exports in the first five months of 2017 were up 9.6% over the same period in the previous year, according to the most recent Eurostat data, and unemployment has fallen from 6.3% in July 2016 to 5.2% in July 2017. Business investment was up all through 2016, and since November 2016, the small Austrian stock market is the third-best performer, worldwide, among both developed and emerging countries. At 2.7%, economic growth in Austria will not only surpass the Eurozone average of 2.1%, but outperform that of the rival and benchmark Germany.

Several features of the Austrian political landscape suggest that upbeat economic news might weaken anti-refugee politics. One is that anti-refugee politics in Austria are not part of a larger anti-elite and anti-EU agenda as they are in Hungary, Poland, and elsewhere. The far-right Freedom Party (FPÖ) may occasionally speak out against EU institutions, but sustained attack on the European Union is usually followed by backtracking in Austria. Another is that during the first phase of the refugee crisis in summer and early fall 2015, Austrians welcomed refugees with food and other material support. That initial response, though abruptly reversed in early 2016, suggests that anti-refugee politics in Austria might have some shallow roots, and that realignment with less-anxious German refugee politics might not be as far away as it appears.

The 15 October Austrian election can be seen as a referendum on this issue: namely should refugees remain a primary policy focus, or does the surging economy mean that lingering impacts of the 2015-2016 refugee trauma should move down the list of domestic priorities?

Ahead in the polls since he became the People’s Party candidate in July, Sebastian Kurz is closely identified with a tough line on refugees. As Austrian Minister for Integration, Europe, and Foreign Affairs, he led the early-2016 pivot of Austrian policy away from an open border refugee policy. That pivot set up a confrontation with German Chancellor Angela Merkel, a confrontation that angered Germans, but that was seen in Austria as principled and courageous. The experience decisively shaped the thirty-one year old politician Kurz. Acceptance of refugees may be rising in Austria, especially Vienna, but the disciplined Kurz-campaign messaging, focused on the burden of refugees, is widely credited for his strong performance to date.

For his part, Christian Kern points to an economy that if considered moribund by many a few years ago is now soundly back on its feet. His campaign slogan, “Get what you are entitled to” seeks to underscore both the improved Austrian economy and to argue that all Austrians should share in the increased prosperity. Of course, to what extent Kern, who has only held office for 16 months, is entitled to take credit for the economy is an open question. Still, his presentation of Plan A last January, with its detailed package of economic reforms, suggests that Kern had aligned his political fortunes with an economic message long before the election was called. Borrowing from the modernisation strategy of Plan A, his current campaign calls for a €5 billion reduction of the tax rate on personal income and employer contributions, together with for a €1,500 monthly minimum wage, and an inheritance tax on estates over €1 million.

Less experienced on the economy, Kurz has put budget expenditures for migrants at the centre of his economic platform. His campaign platform, The New Path: New Justice and Responsibility, for example, goes well beyond Kern in reducing the tax rate on personal income and employer contributions, with additional adjustments for bracket creep. Here, reductions of somewhere between €12 and €14 billion in yearly tax revenues are expected, carving a deep hole in the budget. Kurz proposes to fill this hole through economic growth and various efficiencies, but also through new measures directed at migrants, including a lowered minimum social insurance guarantee for non-Austrian citizens of €560 per person, and €1,500 per family. Projected to save €1.5 billion, cuts to migrant benefits will offset close to 10% of the proposed revenue loss. The symbolic significance of a two-tier social system, however, will weigh heavily.

Kurz describes these cuts to social insurance as a “stop to migration into the social benefits system,” a phrase that indicates how thoroughly the campaign is shaped by the rhetoric of refugees. But his proposals also underscore how malleable the concept of refugee has become in some quarters of Austrian politics. Thus, the Kurz platform foresees similar social insurance restrictions for targeted European Union citizens. Workers from Bulgaria and Romania would now be eligible for the social insurance benefits guaranteed to Austrian citizens only after being in the country for five years and after fulfilling certain work requirements. Meanwhile, the broader term “foreigner,” or “EU-foreigner” is gaining currency as the counterpart to the Austrian citizen.

How well all this will go down in Brussels remains to be seen. But the refugee-centred campaign of Kurz seems to have lured voters from Heinz-Christian Strache and his far-right Freedom Party (FPÖ). That is a striking contrast to 2016, when neither the SPÖ nor the ÖVP candidate made it past the first round of the presidential election, and the FPÖ nearly put Norbert Hofer into office. Still, both Kern and Kurz have absorbed some lessons in anti-elite politics from the Freedom Party. Kern has imposed a €20,000 ceiling for campaign contributions to the SPÖ, while Kurz has rejected the traditional clientelism of Austrian parties by recruiting non-politicians, including a former Miss Austria and a retired marathon runner, for his “Sebastian Kurz List” of candidates. Attentive to marketing, he has rebranded the Austrian People’s Party, changing its name to the “New People’s Party” and updating its colours from the clerical black to turquoise.

Though he has stumbled at times, Kern recognises that anti-refugee politics resonates with Austrians. Like Kurz, he calls for illegal migration to be reduced to zero, and profiled himself as an early, outspoken opponent to EU accession talks with Turkey. In addition, the Kurz campaign mantra to speak honestly, and not “sugarcoat things,” has made Kern the candidate of optimism. Still, Kern has struggled to make the campaign about the economy, conceding that “the public is not going to let statistics take away its worries.” Meanwhile, hopes that the Austrian election would follow the German trajectory have long faded. There, many predicted that Angela Merkel’s support for refugees would cost her the chancellorship, and early 2017 polls showed the opposition SPD running even with the CDU. As the election drew closer, however, Merkel’s support surged, and she managed to secure her fourth term in power, albeit with reduced support.

The aggressive anti-refugee rhetoric for which campaigns in Austria have become known is disappearing. Today, slogans that match the difficult-to-translate virulence of “At home not Islam” and “The bells of St. Stephens not Mosque Bells,” two recent catchphrases of the blue Freedom Party, are nowhere to be found. Indeed, in 2017, anti-refugee politics in Austria seem to have lost some of its novelty. Veteran Austrian political scientist Anton Pelinka may be right that “turquoise is the new blue,” namely, that blue has become the new mainstream. Sebastian Kurz may have removed the word “Austrian” from the new “People’s Party,” but his success suggests that while an improving economy may have weakened anti-refugee politics on many fronts, refugees still provide a powerful means to discuss national community and national destiny. 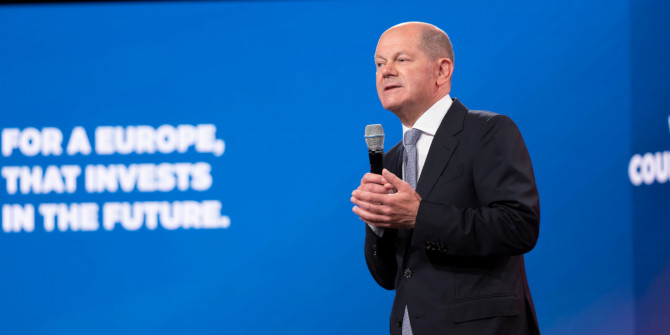