The crisis in Catalonia has thrown into sharp relief the choice facing the European Union, writes Joan Costa i Font. He argues Spain should quickly offer a binding referendum on Catalan independence. If Catalans reject an EU-backed offer, there could be an orderly secession. The Catalan independence movement is not like Brexit: most Catalan parties are keen to be part of a federal Europe. But with so many other EU regions clamouring for autonomy too, the chance of contagion is high. Europe needs to decide whether it is a confederation of nation states – or a federation of regions, determined democratically at the grassroots.

“Catalonia can leave aside the entire universe, but its neighbours cannot do without Catalonia”, wrote Voltaire in Le Siècle de Louis XIV Chapter 23 (1751). (Back then, Catalans’ efforts to defend Barcelona during its siege by the Bourbon-led coalition were regarded as hopelessly naive.)

Today the European Union, and especially Spain, would be Voltaire’s ‘neighbours’. Philippe Lamberts, co-leader of the Greens group in the European Parliament, has warned that last Sunday’s events in Catalonia, and the lack of explicit condemnation by most EU member states, “threaten the spirit of European integration more than Brexit“. The EU Charter of Fundamental Rights, of which Spain is a part, is already in tatters given the obvious lack of respect to human integrity and freedom of association shown by the Spanish police on October 1. The army is reported to be sending a fleet and support troops to the area, which at the very least will stoke fear among the population. 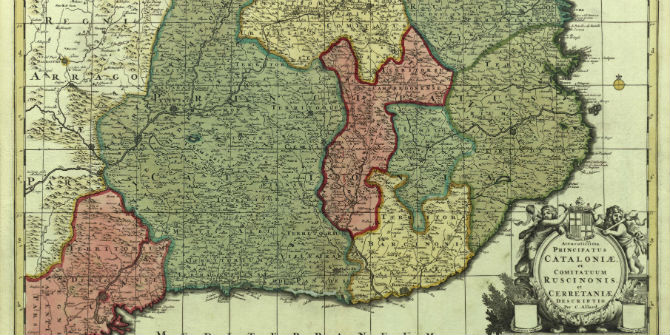 As well as defying the EU when it comes to the enforcement of civil and human rights legislation, the Catalan revolt puts the future of the Eurozone into question. A declaration of independence, with subsequent general strikes and unrest, would lead to a significant capital flight out of Spain, and probably the entire EU. Spain cannot be bailed out by the rest of the EU. It is too big: Catalonia alone produces 30% of Spanish exports, and its economy is heavily linked to Germany’s.  The Catalan territory is the main point of entrance by land to Spain, which is why a disorderly secession would have devastating effects on Spanish trade. But more importantly for the future of the Eurozone, a disorderly secession could see Spanish debt rise beyond 125% of its GDP, as Catalonia would not take its share of the national debt if Spain were to veto it joining the EU as an independent state and keeping the euro. So it is in everyone’s interests that the EU finds a solution to the Catalonia problem. So far, Spain has proved incapable of doing so. Even its head of state has failed to rise to the occasion and act as a potential referee in the process.

Worse, we knew this was coming, as I wrote four years ago.

From a democratic point of view, Spain should put forward the offer of a binding referendum on independence without any delay – ideally within days. For such a referendum to be constitutional, it should take place throughout Spain – but of course only the result in Catalonia would be binding. The importance of a binding referendum lies in the fact it will offer the opportunity for the entire Spanish political spectrum to agree on a proposal to keep Catalonia in Spain (without the usual bragging that Catalonia is ‘privileged’ as they would have voted for it). This could simply take the form of an amendment to the existing constitution. It would grant official EU status to the Catalan language, offer a similar financial arrangement to that of the Basque region, and ensure strategic decisions were taken jointly. Such a proposal would have to be rubber-stamped and underwritten by other EU member states, given that the assurances of Spanish prime ministers would lack credibility. However, if, the Spanish elite remains unwilling to go that far, and fails to persuade Catalans to stay, I can envisage a majority of Catalans voting to leave Spain. This would lead to an orderly secession over a few years – a bit like Brexit, but with the possibility of Catalonia joining the EU.

That said, the elephant in the room is the possible spread of the independence movement to other regions (such as the Basque Country, Scotland, Corsica, South Tyrol, Sardinia and Transylvania among other). Any solution an EU member adopts towards its citizens will provide a textbook pathway for the rest to follow. Given that cultural heterogeneity within some national states is almost as large as between nation states, a textbook response to avoid secession is to federalise every large European state: most large EU member states suffer from a malaise we can label as ‘federalism failure’. Elites in many of country’s capital (Madrid, Paris etc) have overused the old Jacobin fiction of ‘citizens’ equality’ to hide the fact that they still make most of the country’s decisions, as if democracy did not have a territorial dimension.

Catalonia now divides the European Parliament, and the Catalan issue forces us to ask whether Europe should continue to be a ‘union of law-based states’ (as the FT puts it), the borders of which are the results of centuries of conflict. Or should it move on to become a union of citizens, with a stronger federal government in Brussels, but with territorial structures set from below? On this point, I cannot disagree more with my colleague Paul de Grauwe in his diagnosis of Catalan nationalism. Catalan nationalism is very, very different from Brexit, as I discussed in this 2015 post. Small states like Catalonia would be very dependent on Europe to provide global public goods (security, currency, a common market, environment). In fact, almost all the manifestoes of the mainstream Catalan parties make it clear that their goal is to be a state of a Federal Europe.

So the debate European federalists ought to have now is how best to federalise existing European states to provide a platform for this process. This can take place within the nation state (by further federalising existing states), or when federalism fails, as it has in Spain, a process of internal enlargement should be considered. Europe is deemed to fail if it’s a national state-based project.  But what its clear is that the current legalistic strategies to keep European member states together, let alone the use of violence, not only do not work, but antagonise those who were previously neutral.

Europeans need to have a serious debate about the model of Europe we should have – that is, whether we want the EU to be a platform for nation states, or a regional organisation determined democratically from within (see some theoretical proposals for this idea). Is Europe ready to embark on a post-national project? This is the key question.