Elections in new democracies such as those in Central and Eastern Europe are often expected to be volatile affairs, with sizeable shifts in support between parties from one election to another. But is this really a fair characterisation of how citizens of these states choose to use their vote? Presenting findings from a new study, Daniel Bochsler and Miriam Hänni write that the key to understanding voting behaviour in new democracies is to recognise the importance of economic performance. Citizens in younger democracies are more likely to relate the legitimacy of a government to the country’s economic performance, with this effect reducing as a democracy matures.

A large part of research in political science has a pessimistic view of citizens in emerging democracies in Central and Eastern Europe and in Latin America: they lack strong party affiliations, and are therefore notoriously unreliable and volatile, and often vote for newcomers on the political scene (e.g. Tavits, Roberts). This has important repercussions for the quality of political representation. Our new research revises this picture. Governing parties have fair chances to survive more than one legislative period in power when they satisfy the economic expectations of their voters.

We have tracked political parties and their electoral trajectories over a period of 25 years (1990-2014), and for 59 democracies, covering Europe, the Americas, Asia, and Oceania, totalling 389 elections overall. This is one of the largest datasets which has been used to study electoral volatility, and in particular the vote gains and losses of incumbent parties.

On one important point, our research reconfirms the general conclusion of the literature on electoral change: voters in Southern Europe, Central and Eastern Europe, Latin America or in East Asia, are less loyal to their political parties than in established Western democracies. However, this is not a regional effect, but can be related to the short democratic experience of these countries. Once we account for substantial explanations of these differences, we find two inter-linked reasons why this effect plays out.

First, in established democracies, citizens relate the legitimacy of democratic actors and the democratic regime to procedural rules. In the procedural view, democratic regimes possess legitimacy because they operate through democratic procedures, according to the institutional rules. By contrast, many citizens in emerging democracies have a slightly nuanced view of the legitimacy of their regimes: they look at democracy through economic lenses. Across the democratising world, both domestic and Western democratic elites have promised that the transition to democracy will lead to better life standards. Hence, it is not surprising that citizens in new democracies link the legitimacy of their regimes to the economic performance and the economic welfare which they receive. As a consequence, governments live with a “legitimacy straightjacket”: if the (economic) expectations are not met, citizens become quickly dissatisfied.

Second, this “legitimacy straightjacket” has direct consequences for voting behaviour: in emerging democracies, citizens have high expectations about economic prosperity, and these expectations are strongly reflected in their electoral choices. In times of economic hardship voters punish the incumbent, and switch to an opposition party or a new political entrepreneur.

Figure: The effect of economic growth depending on democratic experience 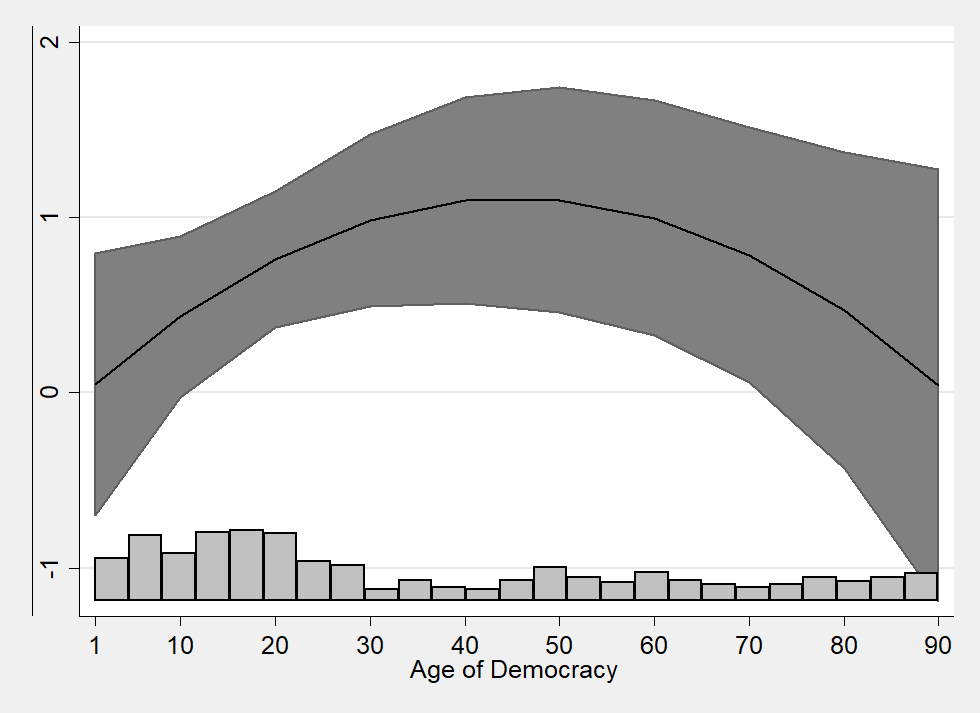 Impressive cases thereof are three elections held in June/July 2009, at the height of the last economic crisis. Three countries, Bulgaria, Luxembourg and Mexico, were all hit similarly by the crisis, experiencing negative growth rates of around –5 to –6 per cent before elections, but the political outcome could not differ more. In Luxembourg, just three parliamentary seats changed party, and the prime minister’s Christian Social People’s Party even improved its lead in the elections. Conversely, the main governing parties of Mexico and Bulgaria, as well as the junior governing party in Bulgaria, lost 12–20 per cent of their previous votes, amounting to a vote loss of 30 per cent in Bulgaria, while a newcomer party (‘GERB’) swept the floor with them and received 40 per cent of the votes.

Finally, there is an exception to the rule: retrospective economic voting does not apply to very young democracies. Incumbent governing parties face substantial losses in the second democratic elections regardless of the economic situation. In these years, the economic divide, which opens between winners and losers of the transition, is related to domestic economic changes, which affect different regions and social groups differently, but not directly related to the macro-economy. However, citizens learn the economic vote very quickly. After ten years of democratic rule, the economic effect in elections sets in.

These findings entirely alter our insights about the incentives, which governments in emerging democracies face. When the electorate is highly volatile and unreliable, incumbents have few incentives to hold their electoral promises, or to perform well in government: they cannot expect to survive the next elections in office, no matter how closely they follow their promises. By contrast, our research shows that governments in new democracies are re-elected, under the condition that the economy goes well. Incumbents have thus strong incentives to be economically successful, as this drives the outcome in the next elections. Economic success is much more important than for their counterparts in old democracies, who can rely on stable voters with a reservoir of trust for their incumbents that protects them in times of crisis.

Note: For more information, see the authors’ accompanying journal article. This article gives the views of the authors, not the position of EUROPP – European Politics and Policy or the London School of Economics.

Daniel Bochsler – University of Copenhagen
Daniel Bochsler is Associate Professor of Political Science at the University of Copenhagen, and a research associate at the Centre for Democracy Studies Aarau. He is the co-project leader of the Democracy Barometer (www.democracybarometer.org), financed by the Swiss National Science Foundation, on which this study is based. His research deals with political institutions, especially in culturally diverse countries and in the context of democratisation. 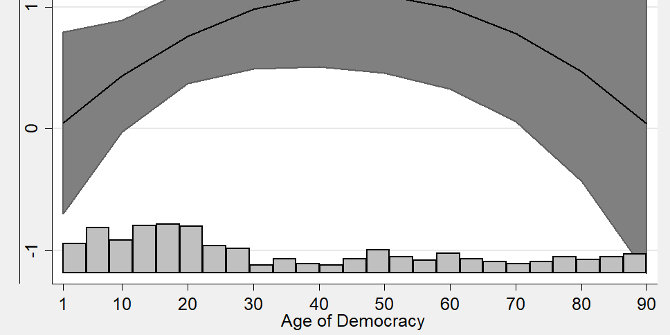