The economic and social policies pursued in the Nordic countries are often cited as examples of good governance for other states to follow. But should the rise of right-wing populist parties in Denmark, Finland, Norway and Sweden prompt a reassessment of this Nordic approach? Michael Cottakis argues that the Sweden Democrats’ result in the 2018 Swedish election highlighted the country’s failure to manage immigration effectively. Unless the Swedish government can facilitate better education of foreigners and promote more flexible recruitment policies, the country could soon become an archetypal example of the hollowing out of the much-vaunted Nordic model.

Political scientists love the Nordics. They seem to have everything right. Their model is often held up as the pinnacle of good governance, economics, and social policy. Adoption of Scandinavian institutions and ways of doing things by other countries is wistfully advocated by disaffected citizens in other parts of Europe. But is the Nordic model losing some of its traditional lustre? With the Sweden Democrats scoring over 17% at the recent Swedish elections, and with far-right movements gaining ground in Denmark, it seems the Nordics are more like the rest of us than perhaps first thought.

The strong performance of far-right parties in Sweden, Denmark, and Finland is regularly traced to dissatisfaction with the EU. Many conservative commentators will suggest that membership of the single market forces traditionally liberal and free-trade oriented Nordic states to work within an economic straitjacket, compromising growth, and the quality of economic institutions. It is an argument taken further by the populists: free movement of persons within the EU leads to the admission of large numbers of ‘undesirables’, poisoning traditional Nordic societies. This is rhetoric UK readers might recognise.

But is the EU the root cause? My suggestion is no. Indeed, the most successful right-wing populist party in Scandinavia is the Norwegian Progress Party, which unlike the Sweden Democrats or the Danish People’s Party, is in government. Norway, of course, is not a member of the EU. Moreover, little evidence exists that EU regulation has curtailed Nordic competitiveness – quite the opposite. Major Scandinavian multinationals, such as IKEA, H&M, and Maersk, have rode on the openness afforded them by the single market to achieve considerable growth in the last twenty years. 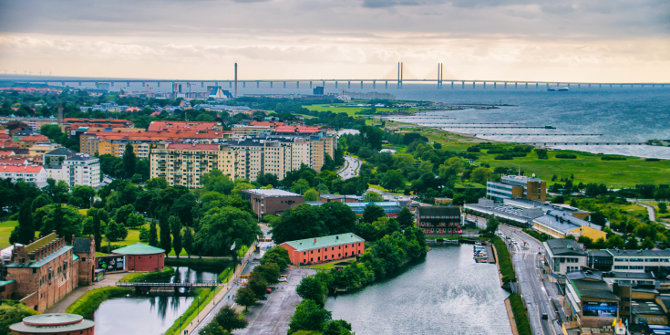 So, if not the EU, what is happening to the Nordics? Clearly, high quality institutions, well-functioning economies, and strong social security systems have not saved the countries from the wrath of the global populist backlash, with all its anti-immigrant and nativist venom.

That immigration is the most contentious issue in Scandinavian politics would seem somewhat surprising. The tolerance, openness, and charity of Nordic societies towards immigrants is noteworthy. Swedish colleagues of mine have often used the term ‘humanitarian superpower’ to describe their country’s friendliness towards immigrants and people in need.

Humanitarian superpower or not, the record of integrating immigrants into Swedish society is at best patchy. According to estimates from the Swedish Migration Agency, a foreigner, or non-native, is three times less likely to get a job. The segregation of foreigners from Swedes is another significant concern. In the predominantly immigrant district of Rosengard in Malmo, employment figures stand at only 27% – compared with 78% nationally.

Much of this stems from the structural needs of the Swedish economy. Formally an industrial hub, Sweden’s is today more service or technology-oriented than any economy in northern Europe. To compound this, company hiring policies are strict and require even entry-level recruits to be highly educated – in some cases only a Master’s degree is enough to guarantee an interview. For immigrant families, postgraduate education involves problems, not only because of the financial cost (many Master’s courses are free), but mainly due to the cost in time. Many will end up working low-paid jobs, assisting in small family enterprises, independent shops, or pharmacies. Many more will be unemployed. In small isolated cases, the resentment might lead to criminal activity. This in turn mobilises conservative groups in opposition to foreigners. It is a cycle well-known in other parts of western Europe.

The populist surge of the last few years has much to do with the sheer numbers of immigrants coming in. In 2015 alone, over 160,000 refugees were welcomed into Sweden at huge political cost for the Social Democrat-led coalition government. Even prior to this, the country’s public services were creaking: schools, hospitals, and housing struggle to soak up the volume. The Sweden Democrats surged in the polls, forcing the government to impose a 30,000 limit on net immigration.

Paradoxically, Sweden has significant demand for high skilled labour. With start-ups and high growth enterprises emerging at a fast pace, the existing labour force struggles to provide the resources needed. The temptation for many firms is to consider pastures new, with London and Berlin well-known destinations. The labour shortfall thus poses an existential risk to the Swedish economy, one which politicians on both sides of the political centre are struggling to get to grips with.

Against such a backdrop, immigrants may yet prove to be Sweden’s salvation. For this, significant investment must be made, ensuring that more immigrants receive a university education or technical training. This would require an effort to grow the university sector, increasing the number of taught places available. More online Master’s courses would allow aspirational young immigrants to complete postgraduate education while working to bring in much needed cash. Public schools might concentrate on teaching basic IT and programming, meaning such skills are learnt by all at an early age, before university. Companies too could show more flexibility in who they hire. A Master’s degree is not always better than a Bachelor’s.

Better education of foreigners and more flexible recruitment policies can help solve Sweden’s immigration crisis. Furthermore, immigrants can provide a new impetus for the Swedish economy. Future Swedish governments must communicate these facts to their citizens, or face the slow hollowing out of the much-vaunted Nordic model.