The Eurozone crisis prompted extensive reform efforts, but what kind of conflict existed among EU member states during the negotiations of these reforms? Using newly collected data on member states’ positions during the negotiations, Fabio Wasserfallen and Thomas Lehner show that states were divided along one distinct conflict structure: the conflict between advocates of fiscal transfer versus fiscal discipline. If anything, the crisis has further deepened this divide.

The reforms of the Eurozone enacted between 2010 and 2015 mark the most profound deepening of European integration since the signing of the Maastricht treaty. In a new study, using recently collected data on the positions of all EU member states and scaling methodology, we identify the underlying dimensions of conflict as well as the dominant coalition patterns in the reforms of the EMU.

For this analysis, we can rely on a dataset that is – to the best of our knowledge – the most complete and systematic collection of member states’ positions in the reform of a very broad range of 47 economic, fiscal, financial, and institutional proposals that were discussed between 2010 and 2015 (including policies of the Six-Pack, Two-Pack, Fiscal Compact, European Financial Stability Facility, European Stability Mechanism, assistance to Greece, and the Banking Union). This new dataset is presented and available here.

The first question of our analysis is whether the politics of the Eurozone reforms were structured by one or several underlying dimensions of conflict. Standard models of EU politics argue that we should focus on two dimensions of conflict: one between left and right governments and the other between advocates of more versus less integration. According to this model, we should find that left governments that support more integration share similar positions, and that they are in direct opposition to right governments that are integration-sceptical.

Apart from these left/right and pro-integration/integration-sceptical divides, the literature discusses further conflict dimensions, such as old versus new member states. A political conflict space that spans over several dimensions essentially means that member states coalesce and oppose one another in different coalitions. Such changing coalitions should soften the political divides and conflicts because, for example, a left government that is pro integration knows that it will in some issues confront a right government that is also supportive of more integration, but work side by side with this government on other policy issues.

This is not the conflict structure that we observe in EMU politics. Rather, our analysis shows that the striking feature of the politics of the EMU reforms was that most conventional EU conflict dimensions did not matter. We can only identify one, single conflict structure that explains political contestation among EU member states in the reform of the Eurozone: namely, the conflict between advocates of fiscal transfer versus fiscal discipline. This conflict spans all economic, fiscal, and financial integration proposals that were discussed between 2010 and 2015.

On this single conflict dimension, we estimate the aggregated positioning of each member state and six European institutions, using scaling methods. The findings show that France advocated the most extreme positions on the fiscal transfer side, followed by Greece, and supported by the other Southern member states and Belgium. On the other side of the spectrum, the Netherlands and Finland are the most pronounced advocates of fiscal discipline, followed by Germany.

Also, on the fiscal discipline side, yet closer to the middle, is a large group of Northern, Central, and Eastern European member states, including countries such as Slovakia, Croatia, the Czech Republic, Austria, Latvia, Estonia, Hungary, Sweden, Denmark, Romania, Great Britain, and Bulgaria. Overall, we can empirically identify two coalitions on both ends of the one-dimensional spatial scale that are in strong opposition to one another. France and Germany are, as de facto leaders of these two opposing camps, positioned at both ends of the scale.

Figure: Ideal point estimates of the positions of each member state and six European institutions in the negotiations of the Eurozone reforms

The fiscal transfer and discipline coalitions both seek the support of the third group of actors that are positioned in the middle. Here, we find most EU institutions, namely, the Eurogroup, Council, European Parliament, European Commission, and European Central Bank, whereas the Economic and Financial Affairs Council is located closer to the fiscal discipline side. Ireland, Cyprus, Luxembourg, and Slovenia are centrist member states that switch positions between both opposing coalitions. Our findings are consistent with other studies highlighting the divide between export-oriented, creditor and debtor countries.

What can we learn from this analysis? First, the findings point to a very profound and historically rooted divide between advocates of fiscal discipline and countries that are supporting more transfers within the Eurozone. In essence, member states are divided along two different macroeconomic concepts for the Eurozone, and the diverging preferences reflect ideational, economic, and institutional differences among the member states. If anything, the crisis has further deepened this divide. This stable, one-dimensional conflict overshadows all political negotiations on reforms of the Eurozone. Within this clear divide, opposing narratives and analyses of the causes and consequences of the challenges of the Eurozone persist – and were further reinforced through the crisis.

Second, the analysis of the data shows that the fiscal discipline coalition is larger than the group of fiscal transfer advocates. The enlargements of the EU to Central and Eastern Europe has strengthened the fiscal discipline coalition. However, the power balance has only shifted a little bit, as the fundamental political conflict between the two opposing camps has not changed. The Central and Eastern European countries could make much more use of their pivotal position in-between the two opposing camps, with a more active role as power broker.

Finally, the advantage of a one-dimensional conflict structure is that it provides a straightforward negotiation space with the median position as compromise between the two opposing coalitions. Also, France and Germany are, as the two most powerful member states, leading the two opposing camps. Both are situated at the ends of the conflict space, whereas Germany is pressured by Finland and the Netherlands, which advocate more extreme positions. This negotiation space provides an ideal setting for joint German–French proposals, which should gain political support among all EU member states. The question, however, is whether the governments of France and Germany are willing to take the political risk of a bold compromise, or whether they prefer the exchange of small concessions. The political conflict structure is favourable to both of these strategies – but for the long-term sustainability of the EMU, small concessions may not be enough.

Note: This article gives the views of the authors, not the position of EUROPP – European Politics and Policy or the London School of Economics. Featured image credit: Maslmaslmasl (CC BY-SA 4.0)

There is little evidence citizens with populist attitudes are less democratic 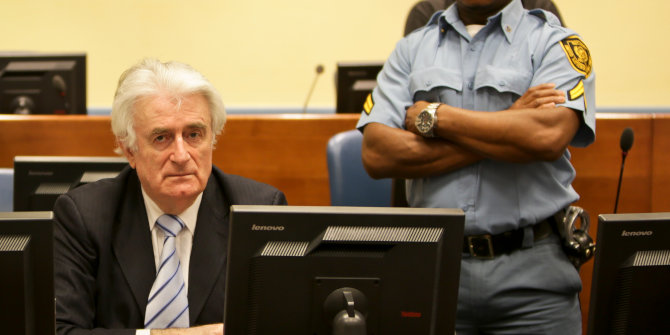