What impact will Brexit have on the decision-making processes and outputs of the European Union? Drawing on a new study, Narisong Huhe, Daniel Naurin and Robert Thomson assess the effect of Brexit on the Council of the EU. Their findings indicate that some member states face particular political challenges, and that Brexit is likely to tilt EU policies towards more regulations and subsidies. However, the policy shifts are likely to be modest in size, and there are also factors that are helping the EU’s remaining member states to adapt to Brexit.

Much has been written and said about the possible effects of Brexit on the UK and the economic relations between the UK and the EU27. However, there has been little systematic analysis of the effects of Brexit on the functioning of EU institutions. Losing one of its largest member states could have important consequences for the policies that the EU will adopt and for the relations among the remaining states.

In a recent study, we addressed these questions by integrating two established approaches to research on the EU’s legislative process. The first approach is based on the spatial model of politics, in which actors’ policy positions are represented as points on one or more conflict dimensions. We used data from the Decision-Making in the EU (DEU) project, which includes information on EU actors’ policy positions on controversial legislative proposals that were on the agenda in the period 2004-2008, before the prospect of Brexit arose. The stability of these data in the past indicates that they provide an informative basis for assessing the impact of Brexit.

The first step in the analysis applies a simple bargaining model of the legislative decision-making process to generate forecasts of decision outcomes. It compares the forecasts of the bargaining model with and without the UK included as a member of the EU. Although we cannot say for sure that the previous patterns will continue, or that the expected effects of Brexit will not be overshadowed by other major events, these comparisons indicate some of the pressures to which the remaining member states will need to respond in a post-Brexit EU.

The results indicate that removing the UK rarely changes the process or outcomes fundamentally. Brexit leads to only modest changes to decision outcomes on most issues. While the size of these changes is generally small, the results indicate that there are clear patterns. The outcomes predicted by the bargaining model without the UK are not significantly more pro-integration than with the UK included, but they are significantly more regulatory and involve higher subsidies than the outcomes predicted with the UK.

The second approach is network analysis. Mapping the direct and indirect ties among actors in a political system is essential to understand how the system works in terms of how those actors compete and cooperate. For instance, if an actor forms a bridge between otherwise unconnected or weakly connected pairs of other actors, then its removal could have significant consequences for the remaining actors far beyond the impact of its direct relations. To identify the network ties in the Council of the EU, where the key legislative negotiations between the EU member states take place, the study uses data from the Negotiations in the Council of the EU (NCEU) project. The project has surveyed representatives of all member states in the main working groups of the Council every third year since 2003.

Figure: The UK’s position in a cooperation network in one of the Council’s key committees (COREPER I) in 2015 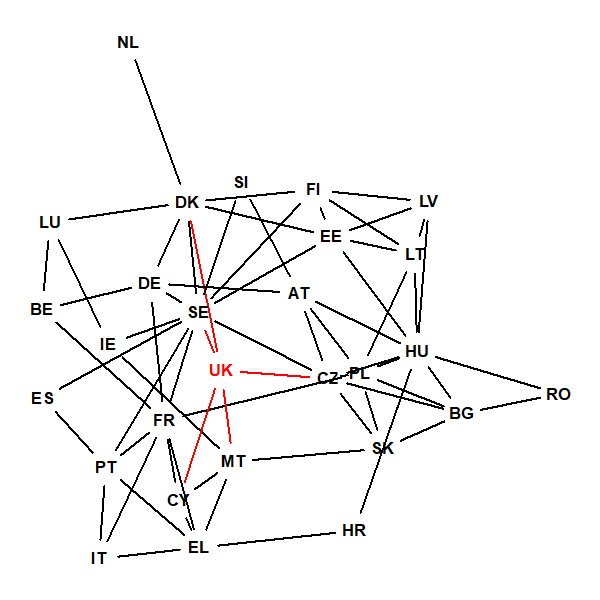 On the basis of this information, we assessed the impact of the UK’s exit on the strongest direct and indirect relations among the remaining member states. We calculated measures of network centrality with and without the UK included in the network. These comparisons indicate the changes in the cooperation network to which the remaining member states will need to adapt and are already adapting. The results indicate that nine member states, including Denmark, Ireland, the Netherlands and Sweden, are likely to be negatively and significantly affected by Brexit with respect to their network centrality. These states will become significantly less central in Council networks if they do not take compensating measures. The mediating network positions of some larger member states, on the other hand, including in particular France, Germany and Poland, are likely to be strengthened.

We then integrated the spatial modelling and network analysis in two ways. First, we focused on the compensating measures that could be taken, and that to some extent already have been taken, by the remaining states most disadvantaged by Brexit. The data from the spatial modelling approach reveals the other states with which each of these Brexit-disadvantaged states shared similar policy positions in the past. Our analysis shows that most of the Brexit losers have opportunities to compensate for the threatened reduction in centrality by forming new relationships with likeminded others. It also shows that some of these new relationships have already been formed. For example, cooperation between the Netherlands and Sweden is becoming stronger, as is the cooperation between Denmark and Ireland.

The second way in which the two approaches were integrated was by modelling the development of the network in one of the key committees, the Permanent Representatives Committee I (COREPER I), in 2018. This model provides strong evidence that the cooperation network is adapting in response to the prospect of Brexit. States that have most to lose from Brexit, such as Denmark, Ireland, the Netherlands and Sweden, are the most active in finding new cooperation partners. In addition, states that are gaining in terms of their importance as mediators, including France, Germany and Poland, are becoming even more attractive cooperation partners.

Finally, there are two factors that are likely to ameliorate the pressures on the EU posed by Brexit. One is the lack of structure in the policy positions of member states. This means that states which agree with each other on some issues disagree with each other on other issues. The consequence of this lack of structure is that taking any one of the actors out of the process seldom leads to radically different decision outcomes across a range of issues.

Another characteristic of the EU’s political system that dampens the impact of Brexit is the stock of network capital held by member states and member states’ ability to build new network capital. The analysis of the most recent network data from 2018 indicates that the remaining EU27 are already building new network capital. Those states that are negatively impacted by Brexit are most active in forming new ties, and the large states, whose mediating roles are expected to grow, are also gaining new ties. These new patterns are likely to endure regardless of the form and timing of the UK’s eventual departure from the EU. The findings indicate how informal structures, of which cooperative network relationships are an example, are socially constructed. By being aware of and actively responding to the pressures that Brexit will bring, the EU has the capacity to adapt successfully.