Sinn Féin won the highest share of the vote at Ireland’s general election on 8 February. As Conor Little explains, the late surge in support for the party was so unexpected that it failed to run enough candidates in the election to fully capitalise on its popularity. The resulting volatility, fragmentation and polarisation will make coalition negotiations challenging, and a new general election later in the year remains a possibility.

Ireland’s general election took place on Saturday 8 February. The result was extraordinary in a number of respects. Sinn Féin’s vote share increased by 10.7 percentage points, making it the most popular party. This is the first time it has achieved this distinction; it will not be the largest party in the Dáil only because it did not run enough candidates to capitalise on its surge in popularity.

While this is a big achievement for Sinn Féin, it also has the distinction of being the smallest ‘largest-party’ in the history of the Irish system by vote share, while the largest party by seat share – Fianna Fáil – is also the smallest ‘largest-party’ by seat share. The Irish party system is even more fragmented than it was in 2016 and the 2020 results are historically among the worst ever for the three established parties. 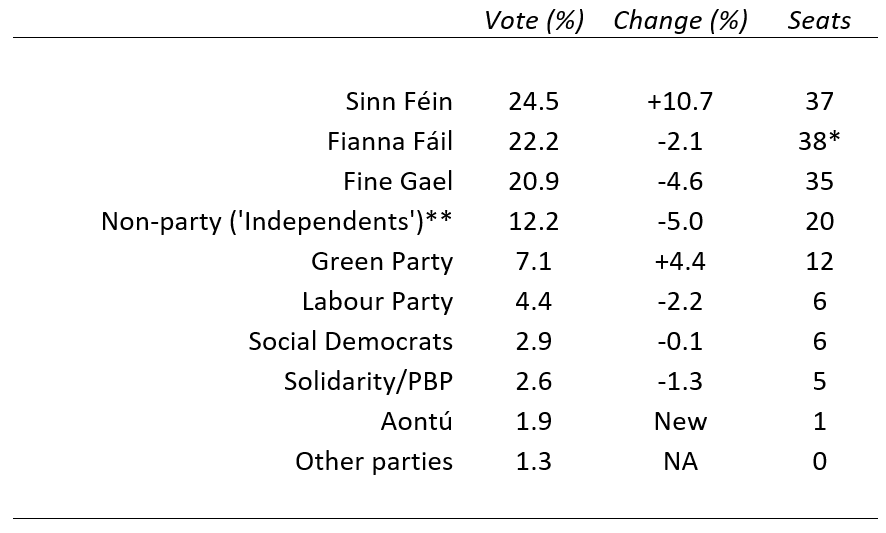 Note: Changes are from the 2016 general election. “New” = newly registered party since the 2016 election. * Includes the Speaker (Ceann Comhairle), who is returned automatically. ** Includes the Workers and Unemployed Action party and Independents4Change.

The party system is also more polarised than ever before; it marks the emergence, for the coming legislative term at least, of a left-right division in the party system, which has historically been ideologically compact, as well as promising divisions on parties’ approaches to Northern Ireland and the EU.

Finally, while the scale of the electoral change is substantial, its timing is also notable: widespread support for Sinn Féin appears to have crystallised within the space of just a few weeks, taking the party and everyone else by surprise. Several of Sinn Féin’s new TDs (MPs) won thousands of first-preference votes in February 2020 having failed to be elected to local councils in May 2019.

The result is part of a story that began more than a decade ago, with the economic crisis, spending cuts and tax increases, and the intervention of the IMF and EU with a multi-lateral ‘bailout’ loan in late 2010. Fianna Fáil and the Green Party, which were in government at the time, were severely punished by the electorate at the general election in 2011. Having continued with a programme of spending cuts and tax increases from 2011 onwards, Fine Gael and Labour also lost swathes of voters in 2016, notwithstanding Ireland’s rapid economic recovery.

From 2016, Fine Gael governed with the support of a variety of non-party TDs, some of whom took ministerial office. They also struck a confidence-and-supply agreement with Fianna Fáil, which effectively supported the government in parliament. This arrangement lasted almost four years – long beyond its expected lifetime – partly due to the need for political stability in the face of the UK’s exit from the EU. 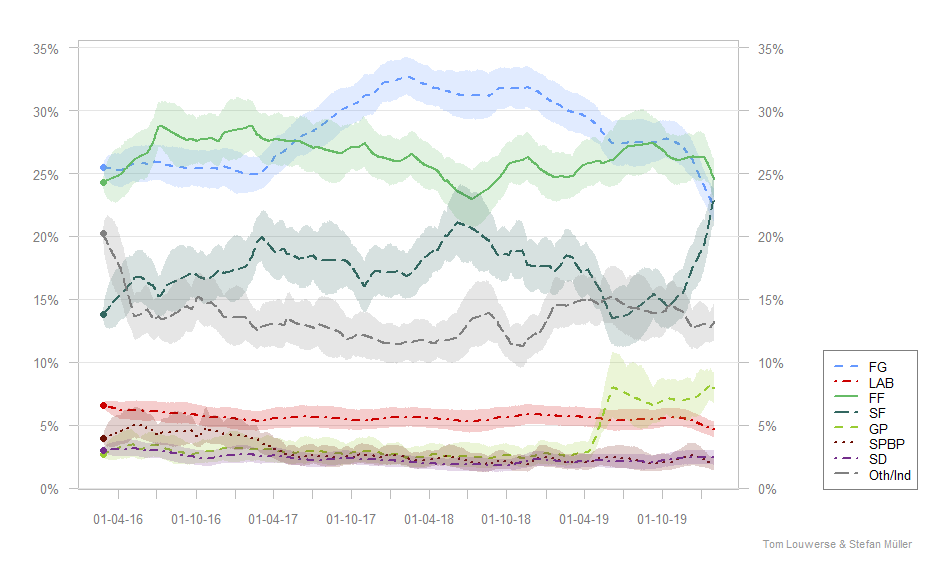 After replacing its leader in June 2017, Fine Gael performed well in opinion polls, albeit it began to falter during 2019. Once the Brexit ‘divorce arrangement’ was agreed in late 2019, it provided a window of opportunity to call an election in early 2020, before negotiations on the EU’s long-term relationship with the EU began in earnest.

Throughout the decade of crisis and recovery – and since their entry into the Dáil with one TD (MP) in 1997 – Sinn Féin made steady but usually unspectacular electoral progress, usually underperforming their showing in opinion polls. In 2019, it had a very poor local and European Parliament elections, losing half of its local councillors and making its success in the general election all the more surprising.

A number of contextual factors help us to understand the success of Sinn Féin and the failure of the established parties. First, the 2011 and 2016 elections were highly volatile, with large numbers of voters deserting the governing parties on each occasion (Fianna Fáíl and the Greens in 2011 and Fine Gael and Labour in 2016). Voting habits have been disrupted by these very volatile elections, and so, in 2020, there is a large pool of voters who are accustomed to moving between parties and are available to vote for candidates or parties they have not supported before.

In 2016, this was reflected in the exceptional success of non-party (‘Independent’) candidates and in 2020 it has been reflected in success for Sinn Féin and continued success for Independents. Like most of those Independents, Sinn Féin has the advantage of being unsullied by government participation in the Republic of Ireland during the economic crisis (although it is part of a cross-party power-sharing regional government in Northern Ireland).

Second, the ‘confidence and supply’ arrangement between Fine Gael and Fianna Fáil, in place since 2016, has allowed Sinn Féin to claim that it is they who are the main party of real opposition and that the established parties are responsible for severe social problems, such as homelessness, that have persisted and got worse over the past four years.

Just as in 2016, when Fine Gael’s economy-focused slogan (‘Keep the recovery going’) failed to resonate, Fine Gael also failed to focus the agenda on ‘its’ issues of Brexit and the economy. Rather, the main issues of public concern – housing and healthcare, along with other public services, such as childcare – dominated. Sinn Féin’s focus on policy on these problems – especially housing and healthcare – resonated with voters, for whom these are central concerns. 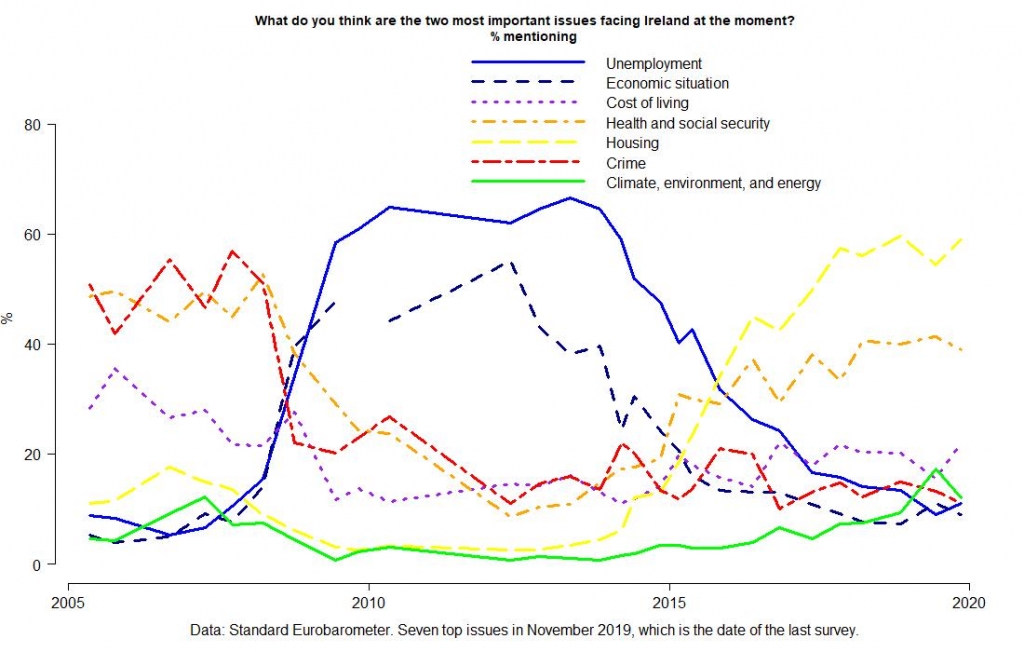 These contextual factors help to explain Sinn Féin’s surge. However, the timing of that surge is more difficult to explain, because there were relatively few events during the campaign that can plausibly explain a surge of support of that magnitude. Indeed, Sinn Féin did not expect the surge, so they ran only 42 candidates for a parliament that will have 160 seats in it.

In the days before the campaign, Sinn Féin agreed to resume power-sharing with unionists in Northern Ireland; this may have broadened its appeal. It also objected, with others, to the commemoration of the pre-independence (i.e., pre-1922) police force. Yet it seems that the formation during the campaign of voters’ retrospective evaluation of the main parties’ performance on the issues that mattered to them – housing, healthcare, and other public services – must have driven much of the change.

In some respects, this election was a ‘hard test’ of Sinn Féin’s support, as most of the final week of the campaign was dominated by criticism of comments made in 2007 by its Finance Minister in Northern Ireland in an attempt to smear the reputation of a young man murdered by IRA members that year. This brought to the fore its historical relationship with and support for the IRA. Yet reservations about Sinn Féin’s history – even its recent history – clearly do not hold sway to the same extent as before; Sinn Féin won about a third of the vote among under 35s.

All of this – volatility, fragmentation, and polarisation – promises difficult coalition negotiations ahead. In 2016, it took 10 weeks to form a government. At the time of writing, Sinn Féin leader Mary Lou McDonald has stated a preference for a coalition with smaller parties of the left, a combination that is unable to form a majority. She has described a Fine Gael-Fianna Fáil coalition as her least preferred outcome. Crucially, Sinn Féin decided after the 2016 general election to remain open to becoming a junior coalition partner in government with Fianna Fáil or Fine Gael.

There are significant policy differences between Sinn Féin and most of its prospective partners on economic policy and social policy. There are also differences on Northern Ireland: Mary Lou McDonald made holding a referendum on unity between Northern Ireland and the Republic of Ireland a precondition for Sinn Féin entering government. Fine Gael leader Leo Varadkar has reaffirmed that his party will not go into coalition with Sinn Féin, but Fianna Fáil leader Micheál Martin has not ruled it out, despite having done so emphatically during the election campaign.

All parties’ positions may shift during the government formation period, and intra-party politics will play an important role. It is also possible that there will be a second general election in 2020; at present, this is viewed as an appealing prospect for Sinn Féin, given their popularity, and is unappealing to all other parties, further increasing Sinn Féin’s bargaining power.

Note: This article gives the views of the author, not the position of EUROPP – European Politics and Policy or the London School of Economics. Featured image credit: Sinn Féin (CC BY 2.0) 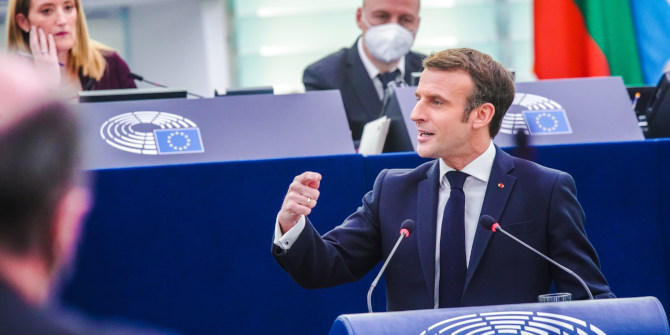