Income inequality and radical right voting have both increased in the past decades, but are the two phenomena linked? Sarah Engler and David Weisstanner write that rising inequality signals to voters higher up in the income and status hierarchy the threat of a ‘steep’ social decline. When inequality increases, these voters then turn to radical right parties who offer to defend existing social boundaries.

Income inequality and the rise of radical right parties are two major phenomena of our time. Although contemporary debates are dominated by Brexit and the election of Donald Trump, radical right parties emerged much earlier, in the 1980s and 1990s, in Austria, Belgium, Norway, Switzerland and other Western democracies. These are countries with comparatively low levels of inequality, but these are also countries with a trend towards increasing inequality. Surprisingly, few scholars have studied the relationship between these inequality trends and radical right support. In a new study, we shed light on this relationship.

At first glance, the evidence for the effects of the economy on voting for radical right parties is mixed. People with low income and low social status (the ‘left behind’) are often not the ones that are most attracted to the radical right. Fear of job loss and perceived decline seem to be more important than ‘actual deprivation’. However, many studies ignore long-term macroeconomic changes, which can affect how the economic situation of individuals is linked to their vote choice.

The social divides resulting from the trend towards rising inequality are particularly important. In a new study, we estimate the association between income inequality and radical right voting. We explore specifically which income and status groups react most to rising income inequality. We compare 14 OECD countries, using individual-level survey data on support for radical right parties between 1987 and 2017.

In principle, income inequality can matter in two ways. First, through relative deprivation. Inequality deteriorates the relative position of the ‘left behind’, as the distance between them and better-off earners increases. If feeling ‘left behind’ leads to support for the radical right, citizens from the lowest income quintiles and low subjective status should become even more likely to vote for radical right parties when inequality increases.

Second, through the threat of social decline. Inequality not only increases the disparities between different income groups, it also raises the potential ‘height of fall’ for those not (yet) at the bottom of the distribution. The more unequal the society, the more people higher up the social ranks have to lose – and the more they turn towards the radical right who speak to their dissatisfaction by opposing open labour markets and globalisation. In this case, middle-class citizens with higher subjective status should turn out more numerous in supporting the radical right. 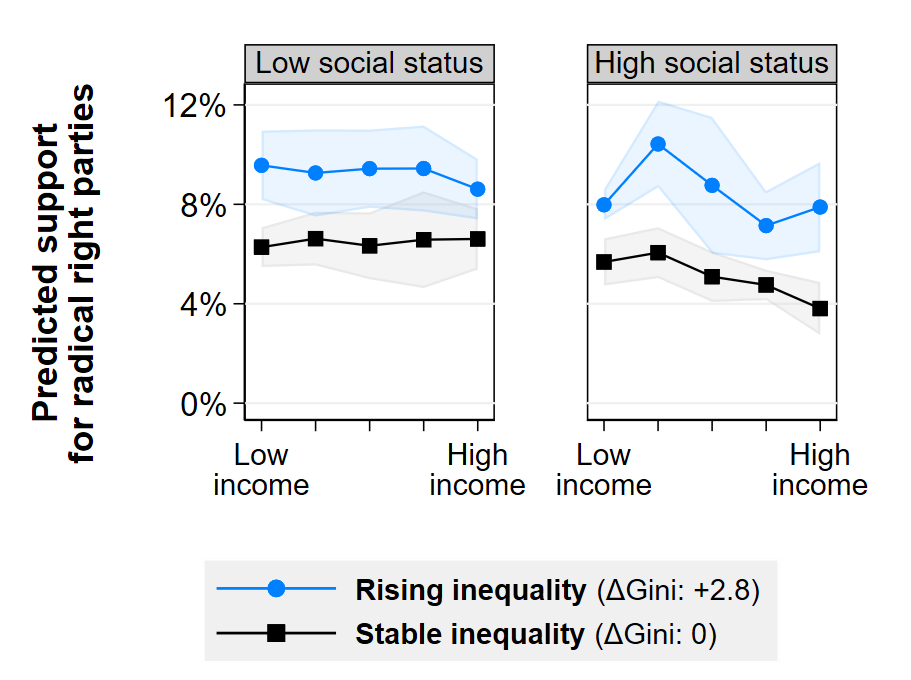 As we see in Figure 1, as income inequality increases over the long run, the likelihood of voting for the radical right increases quite substantially among all income and status groups. Most strikingly, however, is that this effect is more pronounced for people with high subjective social status. The figure shows that mainly people with lower-middle incomes but high subjective social status turn towards the radical right when inequality rises. This finding speaks strongly in favour of the claim that the fear of decline – rather than actual decline – matters in explaining why the support of radical right parties increases in times of rising inequality.

The role of subjective social status – and not just income – is particularly crucial. Radical right parties are not just expressions of protest among the ‘left behind’ against mainstream parties who have ‘betrayed the people’. Rather, the radical right also cultivates nativism and therewith provides non-economic criteria of subjective social status. In situations of rising inequality, when disparities in status perceptions grow, the radical right thus becomes an attractive alternative by promising to protect existing social hierarchies.

This is in sharp contrast with the changing voting patterns when looking at the support of radical left parties. There, we cannot find strong support for the claim that the fear of decline matters, but rather it seems that rising inequality simply reinforces the effect of relative deprivation. In times of rising inequality, the poorest are even more likely than other income groups to vote for the radical left or abstain from voting. Thus, it seems that even though income inequality is a sign of more people feeling ‘left behind’, it is not the ‘left behind’ that eventually brought about the rise of the radical right. Instead, it is the anxiety of those higher up the social ladder who are concerned about falling sharply.

We do not claim that inequality alone explains the rising support for the radical right. Our findings rather can be seen as a corrective to recent views that entirely ignore macroeconomic developments and face the puzzle of why support for radical right parties has increased although anti-immigration attitudes have stayed largely stable.